One would envision driving the Pacific Coast Highway, watching the waves lap against the golden sand, smelling the saltwater as the young girl ran with her dog. Almost, but not quite. The smell of seawater was intertwined with oil from the oil rigs in the ocean and on the side of the highway.

The smell made me nauseous. It was explained to me that the smell and the air used to be worse in that area of the world.

Make no mistake, while this is dubbed a road rally and all entrants are “mighty cordial”, this is a race. The race is to the finish line, and it includes big bucks for the groups with the correct patents. Currently, nine automakers around the world own hydrogen vehicles. Let’s explore each one and their differences.

I was at a Cadillac and Corvette launch awhile back that Bob Lutz attended. Lutz laughingly told all journalists that if anyone wanted to talk about the environment, they could meet him in the back. Lutz was laughing – laughing all the way to the bank. Lutz has Larry Burns.

Larry Burns not only understands hydrogen, he knows the economics of hydrogen, the real race. According to Burns, “We are at a turning point in history. We can decrease our dependence on oil. If it is done correctly, the United States can gain independence and the business economy that you see in the Middle East now.”

How do all the vehicles compare to each other? Let’s take a look at each vehicle. Not at the small technical issues, such as the air conditioning is too loud. The youngest gearhead at the factory can take care of that problem. Let’s look at what each vehicle does differently, smartly.

Toyota and Honda are running neck and neck.

Both are looking at using hydrogen for more than just vehicles.

While hydrogen filling stations aren’t on every street, they are getting closer to urban areas. We drove 50-75 miles each day. CaFCPs energy members oversaw hydrogen refueling, filling each car every day. Each of the multimillion-dollar hand-built prototypes was using liquid hydrogen.

Refueling needs to be varied with the different vehicles in the caravan. The range of travel is from 75 miles to 150, depending on tank size and fuel cell stack size.

The one manufacturer that was absent, and not a member, is BMW. BMW is taking a different tack by developing hydrogen-fueled internal combustion engine vehicles. BMW has a bi-fuel approach, utilizing both hydrogen and gasoline. BMW has said they will have a hydrogen-powered car on the road by the end of the decade.

The first thing we noticed about fuel cell cars is the lack of sound when you startup. All you hear is a muffled whirring. This whirring noise needs to be changed. While driving, it sounds like a police siren. I was constantly looking around for a cop. The onboard fuel cell powers an electric motor. The instant thrust acceleration is instantaneous when combined with a battery. The most surprising aspect is how refined these prototypes were. The vehicles seemed almost production-ready, with plenty of power to climb the steep grades on the oil-drenched Pacific Coast Highway.

Most critical, at least to the average commuter, is that today’s fuel cell vehicles simply do not have the range of their gasoline counterparts. As more components, such as air conditioning, are used the gas consumption will go up. All Manufacturers are looking at ways to increase the amount of hydrogen they can carry.

In six months Gray Daviss CaFCP will meet with the advisory board of Governor Schwarzenegger’s hydrogen highway. According to Al Weverstad, 2005 Chairperson of CaFCP said, “Working together with the State of California; the CaFCP hopes to help realize Governor Schwarzenegger’s vision of a Hydrogen Highway. We are all optimistic that our mutual goals can be achieved more quickly and more successfully than if challenges were pursued independently. The next four to six years promise to be an exciting time for innovation and development for a future that will see fuel cells and hydrogen drive our transportation systems into the 21 st century.” 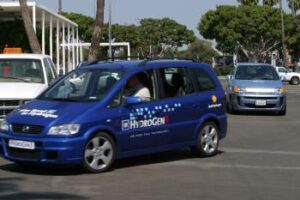