The 2005 Chicago Auto show is the most civilized show of the year. Less than twenty new reveals with enough time to look at them and talk to the executives. The reveals in the windy city were;

One in twenty Mercedes’ is an AMG car, according to Rob Allan, Manager of Product Management. AMG stands for Aufrecht Melcher Grossasbach, basically two guys and a city. A&M were two Mercedes engineers that moonlighted as independent developers (known today as tuners). In 1990 they went into a limited partnership with Mercedes, first with parts than with cars. In the industry, AMG is known as a factory hotrod with exclusivity and power. If you have driven the SL65 or CL65 you’ll love the engine in the S65 AMG; it’s the same.

The V-12 twin turbo 6-liter pounds out 604 horsepower, 738 lb.-ft or torque at a screaming 0-60mph of 4.2 seconds. It is the most powerful engine in the sedan segment. According to Rob Allan, manager of Product Management the S65 AMG, “has very few options; four place seating, in case people don’t want to touch each other. Distronics is their adaptive cruise control that is becoming a standard option on many cars. You’ll be able to tell if the S65 AMG has the optional distronics by the front grille. They have to put the radar in the front grille, and that will change the look slightly. We also have an option for an integrated cell phone with voice control.” The engine is hand-built by one of seven engine makers in Sindelfingen, Germany. Mercedes had one of their engineers building the S65 AMG engine during the show.

Interior leather is only the best; a tan colored Nappa leather is what I sat on. You can tell great leather by the grain indentations. The poorer quality leather has grain indentations applied to make the leather softer. One couldn’t have an actual luxury car without a fan on the bum (FOTB). There are many little fans in the seat that cool or heat your bum just the way you like it. As if that isn’t enough Mercedes has added a massager as well, with different degrees of strength. Unverified EPA mpg ratings are 13-15 mpg. The basic package is $169,000 but with all options added the total package is $177,000. Expected to go on sale in March 2005. Run, don’t walk; there are only 500 projected for production. 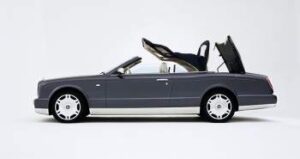 The successor to the $300,000 Bentley Azure was first shown at the 2005 Los Angeles show and again in the windy city at the 2005 Chicago Auto show. Technically, it is a concept, but expect to see it go into production spring of ’06. It’s selling point isn’t that it seats four adults, it’s that it seats four very wealthy adults in complete comfort. The interior, designed by Robin Page, is designed simply and elegantly. If you look down over the car with the hood down, you will see the symmetrical lines, burr oak wood veneer with a boxwood inlay caressing the tip of the leather.

The exterior, designed by Rob Peires, compliments the coupe while it sings it’s own song. The roof is lowered 35mm, and the fully automated canvas roof stows perfectly flush in 25 seconds. The Arnage ADHC retains its cachet of exclusivity and elegance. Best yet, the V-8 6.75-liter twin turbocharged engine produces 450 horsepower with a 0-60 of 5.5 seconds. Bentley offers an array of tailor made offerings and according to Andrew Stuart, President of Bentley, “we can even replace leather with some other fabric if you wish.” Price will be somewhere around $225,000-$250,000. 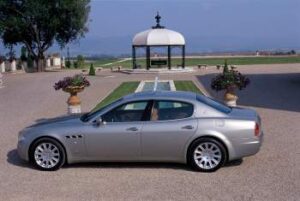 The Quattroporte is the flagship of Maserati. Of course, one would expect an Italian car to be the luxury vehicle of choice for the Italian President and Government representatives, and they have picked the Quattroporte as their representative of all things Italian. Shown last year exclusively in the Neiman-Marcus Christmas Book it took just three minutes for all sixty Quattroportes to sell. You can see Maseratis in the TV shows The Sopranos and Desperate Housewives. The Quattroporte goes 0-60 in 4.5 seconds and only costs $100,000. 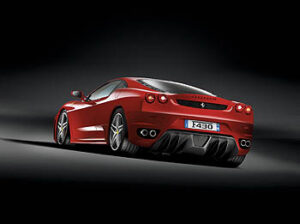 Ferrari is the epitome of a prancing racing machine that hasn’t been gilded. In commemoration of its past 50 years in the United States Ferrari opened a showroom – not a dealership – on Park Avenue. The showroom is more of a museum, not a dealership. Ferrari’s V-8 490 horsepower Berlinetta does 0-60 in a horse-hoofing stomp of 3.5 seconds.

The F430 replaces the 360 modena. Get your pocket book ready – this horse isn’t cheap at a $185,000. Of course, that’s chump change to Michael Schumacher, winner of yet another Formula One year. 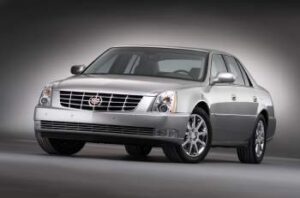 If you’re having a difficult time remembering which Cadillac is which don’t feel bad, I am too. We have the CTS (entry luxury sport sedan), STS (luxury sport sedan), SRX (sports crossover wagon), XLR (two-seater convertible) and now the DTS (full-size luxury sedan). The DTS takes over where the DeVille left off, and there wasn’t much change on the exterior except some front and rear restyling to give it that big bad voodoo daddy look that Cadillac is becoming known for in the U.S.

The engine is the same 4.6-liter Northstar V-8 in the DeVille. You probably wouldn’t have seen President Bush in his inaugural walk in the DeVille, but you did see him in the DTS limousine. The vehicle is a considerably longer, wider and taller version of the production model. You can buy your miniaturized version of Americana heritage when the DTS goes on sale this fall. 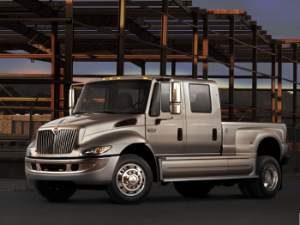 Oops, I did it again. It’s bad enough that International built the CXT, the 1 pound shy of needing a commercial license in your face pickup on a dump truck now they’re doing it again. International actually had the juevos to call this vehicle sleek. This is another in your face; the world be damned and my neighbors. The RXT is built on a tow-truck platform instead of the dump-truck platform for the CXT. But the CXT is selling 25 behemoths a month.

There are journalists saying that it is only a fad, but they said the same thing about the Cadillac Escalade. Full-size pickups are booming. According to J.D. Powers, Power Information Network, sales were up 6.5% from 2003 to 2004 on full-size pickups, and the marketshare increased from 14.2 to 14.9 percent in one year. And, hey, this is a steal, 300 horsepower for only $70,000.

Ed Welburn, chief designer for General Motors, loves the design of the Buick Lucerne. Welburn thinks the Lucerne is, “grace and refinement, a well-executed car with a sculpted metal line that goes from one end of the car, over the top all the way to the front.” Welburn is an emotional, creative man. You see it in the way he touches a car as he explains the design and how he connects to it on an emotional level.

I personally like the Buicks in China better. Buick is huge in China. The Regal is a major seller. General Motors owns ten percent of the market in China, and it is because of Buick. Buick is just not as relevant in the United States as they are in China. It’s great that they have the 32-valve double overhead cam (DOHC) 4.6-liter V-8 that pours out 275 horsepower, but haven’t they seen the success of Cadillac? Buick is trying to appeal to the import luxury crowd, but even Lexus is changing its styling. The Lucerne is taking over in size where the LeSabre left off. It still has the cues on the exterior of Buick of America, though the two-toning red with black was a welcome newcomer, something I would have expected on a Chinese Buick.

An appeal for the younger folks is that the Lucerne is the first Buick to offer a V-8 in more than a decade. There are three trim levels available on the Lucerne, CX, CXL, CXS. The Lucerne is manufactured at GM’s Detroit-Hamtramck Assembly Center along with the Cadillac DTS. There will be lots of room as soon as General Motors stops production of the Pontiac Bonneville. Pricing will be announced closer to launch.

It utilizes the same 2.3-liter engine with electric motor found in the Escape and will be offered in all-wheel drive. Ford didn’t expect to bring the Mariner hybrid out this early, but the gas-sipping fuel-efficient SUV was doing so well Bill decided to pull the due date forward to somewhere before the end of the year. 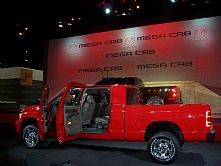 The Ram Mega’s rear door opening is 34.5 inches wide and 35.5 inches high. The 2006 Dodge Mega Cab offers maximum power, maximum torque, and maximum towing capability. The Mega Cab will be available with either a 345-horsepower, 5.7-liter Hemi gasoline V8 or a 5.9-liter, inline-six Cummins turbo-diesel producing a rip-roaring 325 horsepower. The Mega Cab can tow up to 15,800 pounds. For those “made in the USA” types, you’ll be importing this from Daimler Chrysler’s Saltillo, Mexico assembly plant if you buy it this fall.

The entire list of vehicles shown at the 2005 Chicago and Detroit Auto Show were;