“Ohayou Gozaimasu,” or “Ohayou” is the Japanese way to say “Good Morning. I am in Ojai, CA for the first drive of the Toyota Prius Prime plug-in hybrid. California is the largest market for the Toyota Prius. It’s a perfect place to say Hello, or Ojai-yo, to the newest member of the Prius family.

There are four modes in the Prius Prime, but that doesn’t begin to explain the complexity. The Prius Prime plug-in hybrid can go from full electric to normal mode, or even charge the battery while driving it.

We drove the Prius Prime Advanced with the Toyota Safety Sense (TSS) and lots of standard equipment including an 11.6 high-def multimedia display that gave us all the information you needed to decide which mode you wanted to drive in.

A friend and I took the same route three times around. Let’s just refer to my friend as Mr. Hypermiler. Part of being a hypermiler is consistency; slow and steady wins the mileage race. Me, I’m not that patient. I did the fourth leg, the lead-foot Louie leg. I drove the same route, just in normal mode, with normal speed (for me). So, what are the differences in fuel economy? 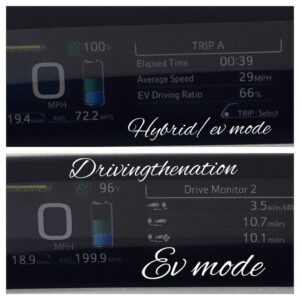 The electric mode only – EV default – keeps you in EV mode

The electric mode only – EV default – keeps you in EV mode

Pretty easy to understand that we would get the maximum amount of miles per gallon – 199.9 mpg, or infinite miles/gallon, when driving only in EV mode. Not that my drive partner would need to know this, but you can – drive up to — up to 84 mph and average 25 driving miles in EV mode from a full pack. On 45 mph speed limit roads, my drive partner was going 40 to 45 mph. Woohoo!

If you drive 25 miles, the battery pack would typically be depleted. When the battery is fully charged it is charged to approximately 80% of 8.8 kWh and when it is empty, it still has approximately twenty percent not used. We call this usable capacity. You can lock any level of battery capacity in this mode for later use and drive the Prius Prime as a standard Hybrid. If you look in the picture, the blue part of the battery is 20 percent. We got 72 miles per gallon in hybrid mode while a large portion of the pack was still available for later use.

In recharge mode, the car will run almost continuously and recharge the big battery back up. We got 41.5 mpg during recharge mode, and our battery pack went from 37% to 61%.

EV auto mode is the new mode. This mode switches between EV and HV mode automatically calculating how much power you need. The total driving range is still based on how much state of charge you have in the pack and how much gasoline you have in the tank in this mode. 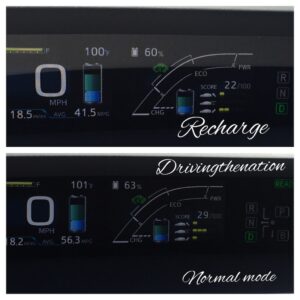 Then came the Normal mode, aka lead-foot Louie mode. I drove the same route as Mr. Hypermiler, but at my speed, slightly over the speed limit (maybe a little over slightly) and I still got 56.3 mpg.

It’s not that Toyota gets the class-leading Manufacturer’s Projected EPA-estimated 133 MPGe/55 MPG City for this segment. It’s that I get 55 mpg and more when I drive their vehicle. This happens consistently with any Toyota Prius that I have driven, no matter where I drive the car.

Ingenious, and new for the Prius Prime, Toyota added an electric heater in the HV battery pack which allows the battery to warm up to above freezing before driving in EV mode. Toyota says they can get total drive range with a Manufacturer’s projected EPA-estimated 640 miles.

Safety Connect is complimentary for three years, and Toyota partnered with ChargePoint, so all new customers get $100 credit to try out ChargePoint.

The 2017 Toyota Prius Prime will be in car dealerships in October 2016. 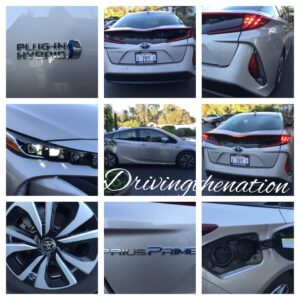