The best-selling Chevrolet vehicle globally is getting another variant; a 2018 Chevy Cruze hatchback turbodiesel 6-speed manual or nine-speed automatic transmission. Building on the 2018 Chevy Equinox turbodiesel announcement two weeks ago, Alan Batey, president of GM North America, confirmed the Cruze hatchback diesel, “the compact diesel segment has historically represented more than 400,000 unit sales, so it is pretty sizeable. Clearly what happened with Volkswagen has created an opportunity for us, so we’ll seize the opportunity.” Hatchbacks are fifteen percent of sales in the United States market.

The Chevy Cruze is bi-coastal

Batey confirmed that Chevy’s biggest market is expected to be the East Coast and West Coast and that Chevrolet’s diesel will meet the stringent California Air Resources Board (CARB) requirements.

The 2019 Cruze is all about bold impressions. But it’s more than just a pretty face. Remarkable efficiency and a range of standard and available tech prove that Cruze offers just as much substance as it does style. And with the choice between sedan and hatchback body styles, how you make your statement is totally up to you. 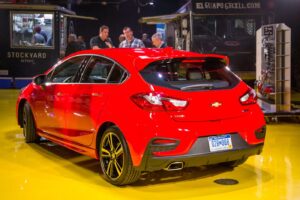