My husband, Stretch, owned the ugliest vehicle Toyota has ever made. Inside Toyota, the vehicle was referred to as the pig but was sold as the Chinook to the rest of us. It was a 1973 Toyota pickup with a camper. It was Stretch’s pride and joy; he could go cross-country in that vehicle. Stretch was probably the first person to use his camper as a home in Silicon Valley.

Stretch didn’t see the rusted out bottom or the missing gasoline pedal. It was the functionality and freedom of the vehicle itself, and the 22R engine. To me, it was a rust bucket, and the more I complained, the more adamant Stretch got that the Chinook was his last vestige of independence. It didn’t help that Toyota’s President, Bob Carter, sent him a 1973 manual on how to repair the Chinook, really how could I make him sell the Chinook now?

In 2009 the Federal government created an economic stimulus program called cash for clunkers. I was elated; now I would be able to talk Stretch into trading in his old Chinook for a new Toyota truck. I had him all talked into the idea, and the news came from on high, a 1973 vehicle was too old and didn’t qualify for the program. I was thwarted again!

Stretch had long told me the vehicle wasn’t worth anything, which was another reason he cited as keeping it (reasoning that belied any common sense to me but somehow made sense to him, “it’s a guy thing, you wouldn’t understand, Lou” That part was true.)

Finally, in 2015 I was having a garage sale, and I convinced Stretch to let me put the Pig in the sale. We agreed that if I could sell the barely moving vehicle with hardly any brakes that he would let it go. I put a sign on it for $700 and lo and behold the Chinook sold for $600. A 1973 Toyota Chinook with a resale value of $600 in 2015. 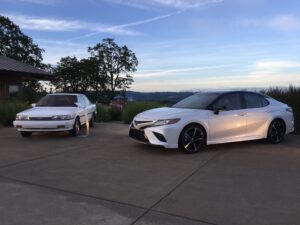 Before and after Toyota Camrys – now stylish and reliable

Anyone who owns a Toyota wouldn’t be surprised that Toyota had a great resale value. It’s one of the reasons Toyotas are so popular. The other reason always heard is because Toyota is reliable. Reliability is a big factor in a Toyota buyer’s decision. That bland but reliable car has sold about 400,000 units annually. Imagine, this sedan has been the number one selling car in the United States for fifteen years and was named the most American made car in the United States in 2016 by Cars.com. There is a new Camry produced every sixty seconds!

It was a girl’s drive as five women assembled in the driveway of The Allison Hotel. We all thought we were driving with each other and then we decided to do just that. All five of us packed into the Camry. Off we went, missing turns, talking make-up, boys and driving the new Camry, feeling the spaciousness of the vehicle. Heather Willis, the product sales specialist, was one of the ladies in the car. Willis talked about the Camry she was getting; I like the black with red interior. I’m not sure I sold her.

The Camry is a lower center of gravity, more sporty and upscale. It has every comfort you could want in a commuter car with the best fuel efficiency in its segment.

There is more technology on this Camry than any previous Camry. It was Jackie’s turn to drive the car. Jackie had never, in her entire life, driven a Camry. She complained about the lag in the car. We drove a little further, and after about thirty minutes she noted the lag was gone. I explained to her that the Camry’s ECU was almost like artificial intelligence; it changed the driving habits of each driver. It learned how to drive by the way she drove. 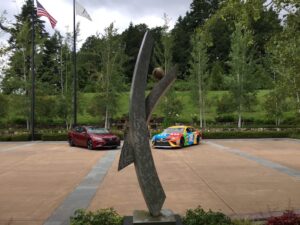 2018 Toyota Camry for commuting and racing

Toyota has mastered economies of scale, and the 2018 Camry is built on Toyota’s new platform, called Toyota New Global Architecture. The new Camry rivals the Fuel efficiency numbers of the Toyota Prius, which is also built on the TNGA platform.

To anyone other than a Toyota owner the phrase “bland but reliable” would be an insult, but to Toyota owners, it was almost a badge of honor. In 1983, when Toyota brought out the first Camry that is what they bought, functionality and reliability. The Camry is in its eighth generation, and it is the most sophisticated looking Toyota Camry yet, and the most fuel-efficient, another attribute Camry owners look for in the new Toyota. 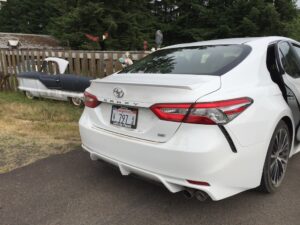 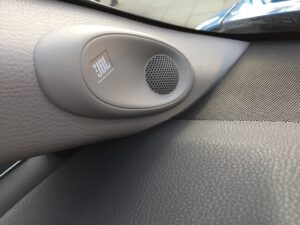 The emoticon on the JBL is not an exclamation point, it’s a horn

The SPORT drive mode setting is new for the hybrid and has been added for an increase in power from the hybrid system. The NORMAL, ECO, and SPORT modes can each be used while EV mode is activated. Try it, it’s fun.

The sweet sounds of the Camry are courtesy of the JBL Audio concert sound with a nine-speaker layout with the emphasis on the driver. The 10.1 subwoofer is the largest subwoofer in any Toyota, creating a wider cleaner sound. Oh, and by the way – that emoticon on the JBL image is not an exclamation point, it is a horn!

“With an exhilarating design, refined interior, stirring driving performance, cutting-edge safety and technology, and class-leading fuel efficiency, the all-new Camry retains its excellent value while raising its level of fun and excitement to new heights,” said Bill Fay, Toyota senior vice president of automotive operations. “It is, quite simply, the best Camry ever and the benchmark in the mid-size sedan segment.”

And it’s not boring, or bland, but the Camry will still have a great resale value. 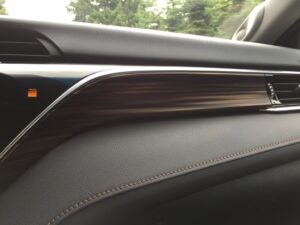