The 2019 BMW X5 is the fourth generation of the Bayerische Motoren Werke, or, translated into English, Bavarian Motor Works luxury brand’s popular crossover. The most significant changes are the technology under the skin and in the interior.

Matte wood trim, piano black trim and Merino leather are included in the interior upgrades. Not to be outdone by Orrefors crystal shifter in the Volvo, BMW has created a glass shift lever of its own. For the first time, BMW is offering 22-inch wheels as an option. The panoramic sky-lounge gives the x5 a feeling of roominess and the 15,000 lights make me think of the Rolls-Royce stargazing roof. The split tailgate is automatic and has anti-slip rails. 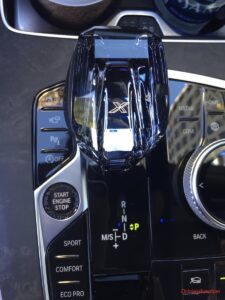 BMW’s live cockpit is a delightful addition to the idrive. The voice control allows you to say you are too hot or too cold and to tell the car what temperature you would like it to be reset at for your convenience. There are still analog knobs for the most commonly used functions, and the digital changes are intuitive. Gesture controls to raise or lower the volume control is a start and a fun technology to show off to people that have never seen it before. Inductive wireless charging for your iPhone available as an option. But my favorite is the hot or cold cupholders. Ok, maybe my second favorite. The first could be the massaging seats. 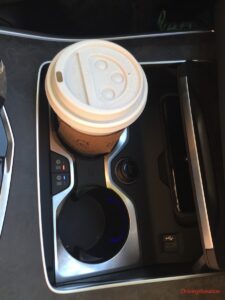 my favorite is the hot or cold cupholders

BMW decided to take us off-roading to show us the neat tricks and technology they have incorporated in the new BMW X5. They added a 30-minute excursion into the Georgia woods using Rock driving mode, in M2, to the Driving Experience. The ability to see in front of you through the 12.3-inch NAV monitor took a lot of the guesswork away. My SUV had the available off-road package with an automatic locking rear differential, adjustable two-axle air suspension, and underbody protection, along with cameras on every corner and hill descent control system.

I really got a feel for the integral active steering technology on the off-road course. The 20.7′ turning radius handles the tight corners with ease. It’s not just off-roading; parallel parking in tight spaces will be so much easier. It will take some time to get used to just like it did with me. I overshot my turn the first time because I’m used to a turning radius of at least 30′.

IAS was first shown in a BMW in the F01 7-series in 2008. This is the first time it has been an option on a BMW X-SUV. The difference is in the turning radius, with IAS you get about 1 meter, about 3 feet, better turning radius. I am always looking for a good turning radius. I have a circular driveway, and a big truck takes a three-point turn to go around the fountain in the middle of the drive. It was a breeze to drive this SUV in my driveway.

With Integral Active Steering (IAS), at speeds up to 30 mph, a small turn of the steering wheel yields a more significant turn of the front wheels for a more direct response. IAS also steers the rear wheels up to 2.5 degrees in the opposite direction, giving the effect of a shortened wheelbase for enhanced maneuverability. When changing lanes at speeds over 50 mph, both front and rear wheels turn in the same direction, giving the feel of an extended wheelbase. While you are experiencing greater responsiveness and directional stability, your passengers will enjoy greater ride comfort from reduced body roll.

The BMW system consists of the following components:

There are very few SUVs that have integral active steering, or four-wheel steering as other companies know it:

BMW is producing diesel engines in Steyr, Austria and hopes that one day the United States will be open to SUV types of diesel, the amount of time it takes to clear a diesel engine and the decrease in sales makes the diesel engine less likely in the US. A plug-in hybrid version of the BMW X5 is planned for 2020.

The fourth-generation 2019 BMW X5 launches with a choice of two new gasoline engines. Heading the range is the BMW X5 xDrive50i, V-8 unit is making its debut. A six-cylinder inline engine can also be found under the hood of the BMW X5 xDrive40i. Both engines are mated with an eight-speed Steptronic transmission, with the BMW xDrive intelligent all-wheel drive.

These 2019 BMW X5 SUVs are on sale at a car dealership near you. Get the integral active steering option and make your life easier.