A look at Future battlefield vehicles

What will the battlefield vehicles look like in the future?

Rochester, NY April 1, 2005 – The U.S. Army took delivery of its first leased fuel cell vehicle from General Motors. The presentation took place at General Motors Fuel Cell Activities Center in Honeoye Falls, NY. The fuel-cell center is across the street from a feed and hay store, located on carriage street. On hand were Sen. Hillary Rodham Clinton (D-NY), who was instrumental in securing the funds in the 2005 Department of Defense appropriations on behalf of General Motors fuel cell experimental truck and Brig. Gen. Roger A. Nadeau, Commanding General, U.S. Army Research, Development, and Engineering Command (RDECOM).

The modified Chevrolet Silverado is equipped with two 94 kW fuel cell stacks, capable of generating 252 horsepower (188 kW) and 317 lb.-ft. Torque, about the same torque produced by GM’s 5.3-liter V-8 engine. Hydrogen and oxygen are fed into a proton exchange membrane (PEM) fuel cell “stack” which produces enough electricity to power an electric automobile, emitting nothing more than water and heat.

Since World War II the United States military superiority has been fostered by our technological advances. This advantage is not just about economic and national security; it is also about protecting the soldiers on the battlefield and having as few soldiers as possible in harm’s way. Advanced technology is at the heart of America’s competitive advantage.

Fuel-cell technology is being funded under the Military’s research initiatives, co-sponsored by Tank-Automotive Armaments Research, Development and Engineering Centers (TARDEC) National Automotive Center. The project’s objective is to develop commercial technologies that will cut fuel consumption by 75 percent and reduce harmful emissions of heavy-duty commercial trucks and buses on bases. The Army itself has a fleet of over 246,000 non-tactical vehicles and drives 823 million miles annually.

Paul Skalny is the deputy director of the National Automotive Center (NAC) for the United States Army. Skalny says the Army has already been testing a variety of hybrid-electric vehicles including Class B High Mobility Multipurpose wheeled vehicles (HMMWV) and commercial line-haul tractors (18 wheelers), but they believe that hybrids will pave the way to the future which is fuel cells and hydrogen fuel. 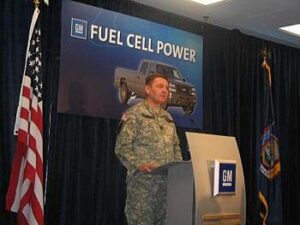 Skalny says the NAC is working with General Motors Corp. to build hydrogen fuel stations, starting with a facility at Ft. Belvoir, Va., home of the Army Materiel Command (AMC) and the home for their new fuel cell Chevrolet Silverado. The non-combat independent rear suspension vehicle will travel to various U.S. military bases over the next sixteen months to test the durability in different climates.

The vehicle is a $3.5 million shared program between General Motors and NAC with data being given back to General Motors so that they can continue their real-world development test.”The Military is always looking at new technologies to provide solutions that address the military’s challenges on the battlefield. Fuel makes up 70 percent of the bulk tonnage needed to sustain a military force on the distant battlefield. It cost the U.S. Army up to $400 a gallon of gas to ship fuel to Iraq and Afghanistan. The military uses around 600,000 gallons of gasoline per day for a force of 30,000 soldiers. At one point in the Iraqi campaign, there was a pause in the advance, caused partly by lagging deliveries of fuel, water, and ammunition, “with a heavy emphasis on fuel.”

The French expression “le sang Rouge de Guerre” “the red blood of war,” captures the significance of fuel in wartime. Fuel cells have the potential to provide more efficient vehicles through the use of advanced drivetrain technology and alternative fuels. Fuel cell vehicles could help the military solve tactical and logistical issues faced by the military.”

According to Richard E. McClelland, the director of the U.S. Army’s TARDEC, “The military is always planning, years -decades – in advance. This fuel cell truck will give us the opportunity to investigate using hydrogen in niche operations such as Unmanned Ground Vehicles and special operations.”

“Special Operations folks can go out in the desert and be underground for weeks. They are trained to find water and food is no problem, but they have to come back because they run out of fuel. If we could find the energy and a vehicle with advanced technology those guys could stay out longer.

A fuel-cell that the military has already invested in is an onboard fuel cell auxiliary power unit (APUs). This allows the vehicle to run all the time without using fuel when sitting idle. A lot of specialized vehicles like heavy on-road construction vehicles need to idle. In the military, such requirements are quite common. 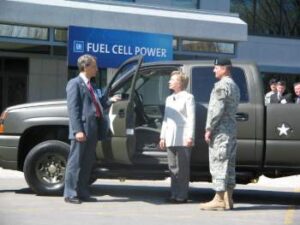 The benefit’s of the fuel-cell APU are: