Car manufacturers are listening to you and have created the compact SUV. I call it the AGSUV – active grandparents SUV. Grandparents are around sixty years old, almost at retirement, while their kids are in full tilt with their kids and all of their stuff. Grandparents take their grandkids in their cars, and they buy cars that fit that lifestyle.

Grandparents don’t need as much room as parents with kids in their cars, but they need to have extra space in that car. Enter the compact SUV, including the new Nissan Rogue Sport.

What’s the difference between the Rogue and the Rogue Sport? I asked my colleague, and 6′ 9″ friend, Brian Armstead, to sit in the front seat of the Rogue and the Rogue Sport. I then took pictures of the front row of both and the backseat of both. Brian set the configuration the same in each car so that you can see the difference in the picture. There were fewer inches in the rear, making it snug, but I was still able to fit nicely. The big deal for Brian was the headroom; fortunately, he was in a car that had a moonroof :)

Most people are not 6′ 9″, Stretch is only 6′ 4″. He would fit nicely, have more room in the rear seat, and plenty of headroom. And the price is right – 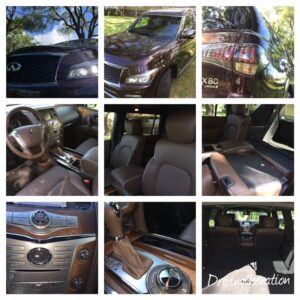