American autos vs. German vs. Japanese vs. Chinese vs. Korean carchat

Thanks to my race car neighbor Scott Pruett. Pruett owns a winery in Auburn, CA, and was kind enough to give me an autographed bottle of one of his finest wines to give Volvo’s president and chief executive officer, Håkan Samuelsson.

At the same time, we were given a look at Volvo’s new global small car range which will include a pure battery electric vehicle as well as Twin Engine plug-in hybrid powertrain variants.

If you think of the naming process, you realize Volvo has a big 90 vehicle; XC 90, S90, V90. They are bringing out the S60 and V60. The new concept cars will be the first built around Volvo’s new Compact Modular Architecture (CMA), which has been specially created for smaller cars named the 40 series. We were also told that there is great potential for an even smaller car than the 40 series to be built.

The first new 40 Series car is expected to go into production in 2017. We were told that Volvo could go even smaller than the 40 series 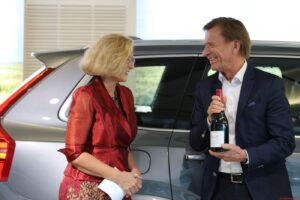 American autos vs. German vs. Japanese vs. Chinese vs. Korean carchat