Are diesel cars dying in the United States?

The demise of diesels

In January 2016, there were 500 diesel cars sold in the United States. Volkswagen has put its 2.0-liter and 3.0-liter vehicle sales on hold till they can figure out an acceptable solution to the EPA and CARB for their Generation 1 – Generation 3 and 3.0-liter emission equipped vehicles that currently do not meet emissions regulations under real-world driving.

A federal judge has set March 24th as the deadline for Volkswagen to come up with a fix for 600,000 diesel models violating emissions standards.

It was for that reason when Continental AG sent out a Press Release saying, “Continental Urea Sensor Helps to Make Diesel Engines Cleaner.” I was interested to see if Continental and Volkswagen could collaborate to improve turbo diesel emissions.

There will be some big and heavy-duty pickups and commercial vehicles that can use this new system, but what I wanted to know is if Volkswagen could use this new sensor as a retrofit for its recalled vehicles. Oh, if only it were that simple.

In 2015, the Volkswagen group recalled 482,000 2009 through 2015 Volkswagen and Audi models with 2.0-liter, four-cylinder engines. The first emissions generation EA189 series engines were found to have the illegal software known as the defeat device that allowed VW cars to emit harmful levels of nitrogen oxides (NOx) air pollutants – known to form smog and acid rain – more than 35-40 times permitted by law. Subsequent tests found an additional 85,000 Volkswagen, Audi, and Porsche vehicles with the 3.0-liter V-6 powertrain that were emissions non-compliant, although not using the same illegal software as the first 482,000.

Approximately 325,000 of the Jetta, Golf, and Beetle vehicles were not fitted with a urea-based selective catalytic reduction (SCR) system initially and will probably not be able to be saved using a retrofit SCR. Generation 1 (EA189 engine) was certified to US-EPA Tier2-Bin5 and California LEV-II ULEV emissions limits and were equipped with NOx after-treatment technologies, including one lean-NOx trap (LNT), a device that is used to reduce oxides of nitrogen emissions.

Adding a brand-new specialized Selective Catalyst Reduction (SCR) catalytic converter, a urea tank, pumps, sensors, and technology would not be economically feasible. There is a balance when creating a clean diesel engine between engine durability issues, loss of fuel economy, air pollutants, and loss of cargo space, which is where the SCR system would go in the car.

Generation 2 (EA189 engines) and Generation 3 (EA288 engine was certified to US-EPA Tier2-Bin5 and California LEV-II ULEV emissions limits and were equipped with urea-based selective catalytic reduction (SCR) systems. Sadly, they were configured with the same software.

The defeat was different for the additional 85,000 Volkswagen, Audi, and Porsche vehicles with the 3.0-liter V-6 powertrain. It was the warm-up strategy that Volkswagen did not declare to the Environmental Protection Agency (EPA)/California Air Resources Board (CARB). While they still lied, this lie was the less egregious of the two improprieties.

The question now is how Volkswagen will solve the emissions problem so that the consumer can be in compliance with both EPA and CARB and the Volkswagen Group can get back to the business of selling the cars they were known for in the past.

What if new technology and new software could be paired to the additional 85,000 Volkswagen, Audi, and Porsche vehicles with the 3.0-liter V-6 powertrain? What if it were as simple as changing the Diesel Exhaust Fluid (DEF), branded by VW as AdBlue to the more precise two piezo housing so that the urea amount was accurate and burned cleaner?

According to Continental, “Since the urea solution must not get too cold, the temperature within the urea tank has to be monitored in order to ensure constant system availability by activating a heating system when needed. Lastly, there must be sufficient urea in the tank. The ultrasonic sensor principle offers the possibility to measure the liquid from outside the tank. This is not only a key element for freezing resistance, but it also avoids any corrosion from occurring at the sensor element or the electronics due to contact with the Diesel Exhaust Fluid (DEF). The innovative urea sensor can provide all this data as an input value for the urea metering.”

The California Air Resources Board (CARB) cannot tell a car company how to solve an emissions issue, but they can require the said manufacturers to meet their stringent emissions standards. Volkswagen group can bring in other companies to help them solve the problem, and present the fix to CARB, but the fix has to come from the car company.

EPA/CARB would like the new Diesel Exhaust Fluid (DEF) tank. Not only does it reduce emissions, but the sensor-aided denitrification also supports the fulfillment of the legal requirements and reinforces drivers’ trust that their car emits no more than the permissible level of nitrogen oxides. The DEF tank will tell you if there is not enough urea, or if you put water, or diesel fuel, in the tank instead.

“Use of our sensor allows better control of the SCR system and helps to avoid overshooting or undershooting during the urea metering process,” said Bret Sauerwein, Head of Business Unit Sensors & Actuators in North America. “Once you dynamically control the injected urea amount by processing the sensor signal, it is much less likely that either NOx or ammonia will slip through the SCR catalyst.”

For applications that require all measurements be recorded, the measuring cell of the urea sensor contains two piezoceramics, which both emit and detect ultrasonic wave signals. 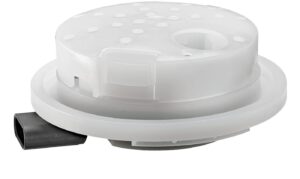 To me, the housing device looks like an old-timey humidifier that you fill with water and put in the room of a sick child. The humidifier gets hot, and the water starts to steam. The Conti DEF housing unit is a lot more complicated than a humidifier.

There are other DEF tanks, many of them have one piezo ceramic. The two piezos allows the measuring of both the ultrasonic wave’s vertical time of travel until it reaches the surface of the liquid and its horizontal propagation speed in the solution. From there, the level and quality of the solution can be calculated. The sensor utilizes the effect that ultrasonic waves move faster in a solution with greater urea content.

Diesel is still alive and well in other countries, and this new urea sensor system by Continental will be used in those countries. But the United States, California in particular, is at a crossroads. Without the ability to fix these Volkswagen/Audi TDI vehicles, sales of diesel light-duty automobiles will continue to plummet.

Which cars are affected?

The other 85,000 affected by warming device:

Generation 1 (EA189 engine) was certified to US-EPA Tier2-Bin5 and California LEV-II ULEV emissions limits and were equipped with NOx after-treatment technologies, including one a lean-NOx trap (LNT)