The Atlas is the third VW named after a Greek Titan, the Eos and the Phaeton preceding the Atlas. In ancient mythology, Atlas was a leader in battle but lost. Big bad Zeus condemned him to eternally stand on the western side of Gaea (the earth) holding it up to the sky.

Well before the diesel defeat device, Volkswagen picked the name Atlas as the appropriate name for the first VW seven-passenger SUV. While I could make this whole story an analogy of Volkswagen and paying penance for its wrongdoings, I rather like Ayn Rand’s Atlas Shrugged better. 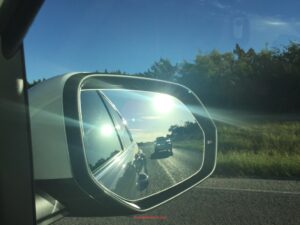 The Atlas was born with the knowledge that Volkswagen needs to do what it does best; allow humans to use their knowledge to create the best vehicle they can in the value parameters set forth for all car companies.

Volkswagen is known for its Fahrvergnügen, driving enjoyment, for the common person; literally, Volkswagen means “People’s car.” It is a testament to the company that VW has been one of the top two global car companies for marketshare for over a decade. Volkswagen doesn’t have the return on equity that Toyota has, but I predict that will change now that the people who are absent of values are no longer at Volkswagen, because the knowledge to create a good car has always been there. 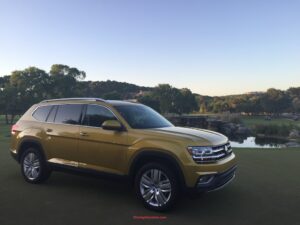 And Volkswagen has great marketing. The 7-passenger, 3-row SUV is a competitive segment, and yet this is the first time we have heard “The best seats in the house are the first three rows.” The Atlas is a credible 7-passenger vehicle coming in at the price point that makes it competitive with its segment.

Volkswagen knows they are late to the dance with a 3-row SUV, but bringing home an SUV starting just over $30,000 is the dress you want to wear to get noticed.

Where does the 2018 Volkswagen Atlas fit in the VW Tiguan versus VW Touareg?

We played with the four modes; Eco, Normal, Sport and Individual and there is a distinct difference, especially in Sport. There is even a snowflake, off-road, and a custom off-road.

The Atlas is the only vehicle in its class to offer Automatic Post-Collision Braking System. For the first time, advanced safety systems include pedestrian detection versus just car detection.

The 8-speed automatic transmission is on all models, along with start/stop as standard. Up to 50 percent of engine torque can be directed to rear wheels. Add $925 to all vehicles for destination and handling charges.

The 2018 VW Atlas is built on the MQB platform, a platform that is seen increasingly on the Volkswagen, including the Golf family and soon to be on the 2018 Tiguan. It’s the type of sharing that needs to happen to bring the cost down, and the return on equity up.

I would love it if there were a SE Tech package 2.0L I4 TSI as a plug-in hybrid (an electric driving range that switches to gasoline). I know Volkswagen is going hard into electric vehicles which is part of the agreement with CARB and EPA, but a plug-in hybrid SUV would be so cool and put the VW Atlas in competition with the award-winning Volvo XC90 PHEV.

The Atlas will be built next to the VW Passat in Chatanooga, TN. The 4-cylinder will be available in August. Shrug it off, the Atlas is here. 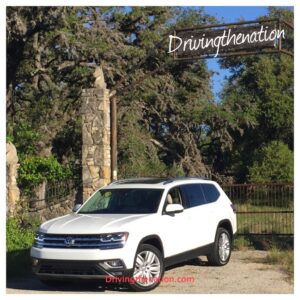