A record crowd of 230,000 spectators saw a stunning demonstration of Audi’s corporate slogan “Vorsprung Durch Technik.” While ambient temperatures of 35 degrees caused a high attrition rate amongst the 49 cars entered, the three Audi R8 sports cars of Audis importer teams from the USA and France ran immaculately throughout the 24 hours. Thus, the Audi drivers were able to overcome the handicap imposed by the regulations. Although the three Audi R8 cars were not the fastest contenders in the field, they clinched first, third, and fourth position thanks to their reliability and their constant run to the finish.

Tom Kristensen, JJ Lehto, and Marco Werner didn’t put a foot wrong, too, during the 24-hour race, thus helping Team ADT Champion Racing to celebrate its first victory at Le Mans “ and the first one for an American team since 1967. Also, Audi works driver Tom Kristensen opened a new chapter in Le Mans history: the Danish driver won arguably the toughest race in the world for a record seventh time thus surpassing the previous record-holder Jacky Ickx. JJ Lehto won the Le Mans 24 Hour race for the second time after his inaugural win in 1995. For Marco Werner, a dream came true when he scored his first Le Mans victory in only his fourth attempt.

AUDI AG is one step ahead of the opposition yet again: The inventor of TDI will fight, as the world’s first automobile manufacturer, for overall victory with a diesel engine at the famous 24 Hours of Le Mans. The new Audi R10 is powered by an entirely new 5.5-liter, twelve-cylinder bi-turbo TDI engine which is extremely economical and quiet.

The Le Mans Prototype, with over 650 hp and more than 1100 Newton meters of torque, significantly exceeds the power produced by the majority of previous Audi racing cars “ including that of its victorious R8 predecessor.

Audi ventures into previously unexplored diesel-engine terrain with the V12 power plant manufactured entirely from aluminum. The enormous torque of over 1100 Newton meters not only makes extreme demands of the R10 transmission system “ as even the Formula 1 specification engine dynamometers at Audi Sport had to be reequipped with special gearboxes capable of withstanding the unusual forces.

The heart of the Audi R10 is a completely new V12 TDI engine with a cubic capacity of 5.5 liters “ the maximum permitted at Le Mans. Audi ventures into previously unexplored diesel-engine terrain with power exceeding 650 hp and torque of more than 1100 Newton meters from the V12 power plant.

“This engine is the most powerful diesel there is in the world and, up until now, the biggest challenge that Audi Sport has ever faced in its long history,” explains Ulrich Baretzky, Head of Engine Technology at Audi Sport. “There has never been anything remotely comparable. We started development with a clean sheet of paper.”

The V12 TDI used in the R10 is the first Audi diesel engine with an aluminum crankcase. The cylinder-bank angle is 90 degrees. The V12 TDI has, like Audi production car engines, four valves per cylinder and twin overhead camshafts. The fuel induction is made by a modern “Common Rail System.” The injection pressure easily exceeds the 1600 bar achieved in production cars. The ignition pressures also reach values never previously seen in any Audi engine. The engine’s power and the high torque are available to the driver practically from idling speed “ a specialty of diesel technology, to which the Audi drivers must now become accustomed. The usable power band lies between 3000 and 5000 revs per minute.

Most of the partners involved in the R10 project have already been working successfully with Audi Sport for many years “ and with several since the start of the “original Quattro” project at the beginning of the 1980s.

Bosch, Michelin, and Shell have all played particularly important roles. As was the case with the direct fuel injection TFSI, which was developed by Audi and Bosch together, Audi Sport and Bosch continue their cooperation for the R10 project. The V12 TDI engine management is performed by the Bosch Motronic MS14. The latest generation Common Rail System also originates from Bosch. The input is however not only limited to the engine: A completely new vehicle-data-logging system (FDE) was created together with Bosch.

Michelin was an exclusive and reliable tire partner during the R8 years. The R10 project also makes new demands of the current Formula 1 World Champions: A wider front tire was designed specifically for Audi. The enormous torque of more than 1,100 Newton meters produced by the TDI engine makes great demands on the rear tires, which only one tire partner with a technical background like Michelin could deal with.

Shell, another partner, previously involved with the R8, is also on board. Shell V-Power Diesel is a particularly efficient fuel, from which the R10 will also benefit: From 2006 Shell V-Power is the official fuel supplier for the 24 Hours of Le Mans. Shell uses the R10 project to develop the next generation of Shell V-Power Diesel.

Numerous other proven technical partners have contributed to the R10 project: The gearbox was designed together with the company X-trac, the carbon fiber monocoque was created under the watchful eye of Audi Sport at Dallara. ZF Sachs supplied the clutch “ a partner with whom Audi Sport has been working since the rally days. Megaline supplies the gearbox control system and the new high-tech steering wheel, O.Z. the wheels, Ohlins the dampers, and Garrett the turbochargers.

There are no visual signs that a diesel power unit is at work in the back of the R10. It goes without saying that the V12 TDI is equipped with a pair of diesel particle filters for the 24 Hours of Le Mans. Flashes of flame from the exhaust, which are created by unburned petrol in spark-ignition engines, are not seen coming from the R10.

One of the diesel engine’s biggest advantages is the low fuel consumption, especially at part-throttle and overrun. Howe’ver, when compared to more classic circuit’s which demand a higher ratio of the part throttle, the lower specific consumption will hardly be noticeable at Le Mans because the quota of full-throttle is almost 75 percent.

The enormous torque of over 1,100 Newton meters not only posed previously unforeseen demands in the development of the R10 drivetrain. Even the latest generation of engine dynamometers at Audi Sport had to be reequipped with special gearboxes capable of withstanding the unusual forces. 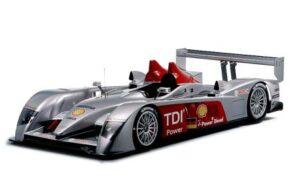