Doing the happy dance! My good buddy, and yours, showed up at the BMW 7-Series launch yesterday and we got to spend the whole day together driving a car and having a blast. It was a beautiful day to be in upstate New York at the Monticello private race track driving a long-wheelbase car that drove like a mid-sized sedan or sports car, depending on which mode you’re in. 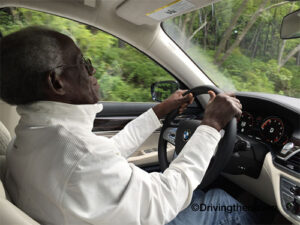 I drove two SUV/CUVs this week. Sheri, Miriam and I went to San Francisco in the white platinum metallic 2015 Ford Edge titanium FWD. The first thing Miriam and Sheri said was they couldn’t believe it was a Ford, “They’ve really upped their game.” If you look at the Ford Edge and the Acura RDX below you can see a similarity in design. The Edge was easy to drive and had plenty of room for the three of us and all of Liz’s birthday gifts. 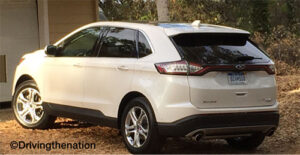 The 2016 Acura RDX AWD in a beautiful blue was an excellent ride as well.

The interesting aspect is that the Ford Edge starts out $7,000 cheaper but once you spec it out to meet what I would feel comfortable comparing it to on an Acura, there is only a $2,000 difference. And I got about the same mpg on both.

What does that say? When you’re comparing vehicles make sure you have everything spec’d out the way you want the vehicle before you start comparing cars.