BMW’s i subbrand currently includes the i3 Electric Vehicle (EV) and i8 plug-in hybrid (PHEV). The flagship iNext electric, the self-driving car is set to enter showrooms in 2021and will have some of the technology showcased on the BMW Vision Next 100 concept unveiled in March. The self-driving Level 5 car will be an all-new vehicle architecture from the ground up including chassis, electrical systems, and partnerships.

Klaus Büttner, BMW’s vice president of autonomous driving, and Dr. Grant Mahler, Senior Advanced Technology Engineer, were at BMW’s technology center in Mountain View, California speaking on BMW’s autonomous technology. While many groups are saying automated driving will be here in 2025, Buttner is more cautious, more realistic with BMW’s steps it will take to gear up to Level 4 and Level 5 technology on the road. 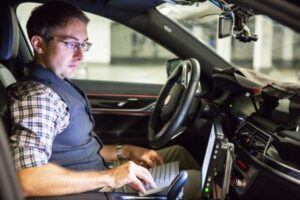 BMW gear up to Level 4 and Level 5 technology on the road.

Mahler talked about the duties of the group in Mountain View, “Currently BMW is working on different programs such as user experience, Advanced electromobility Powertrains with Charge forward -a public grid integration for electric vehicles in collaboration with PG&E. The digital life innovations team is integrating devices into the vehicles, such as Amazon Echo, talking to vehicles or CARPlay wireless that was launched in the current 5-Series.”

Most of the technology is done behind the scenes in Mountain View, but occasionally products are brought out, such as the BMW app code that resides on the Apple watch. That cool Motorrad BMW helmet with an integrated heads-up display that was shown at CES a couple of years ago was also produced in Mountain View. The newest group in California is the IT specialist, but the main focus was the autonomous driving future.

BMW produced two 7-Series prototypes, one with Level 3 highway and the other one to measure the effectiveness of Level 4 and Level 5. All cars are currently at Level 2, which requires drivers to be responsible for the task of driving at all times, but already have cameras and sensors on the car. A lot of the pieces of autonomy are in the car.

BMW’s vision for Level 3 for the autonomous car “will be able to perform secondary in-vehicle activities for longer periods of time or relax (eyes off). The driver must still be in a position to take over the task of driving again within a reasonable amount of time (a few seconds) when prompted to by the system.”

Level 5 Autonomous Technology Not Possible Yet

Büttner answered the questions we had about when a driver should take over and how quickly the driver needs to be told they need to Autonomous driving engineers acknowledge that one of the most troublesome aspects of this technology is getting the driver to resume control. BMW is developing warning mechanisms such as a blue ring in the steering wheel, audio notification, or vibration in the driver seat.

To accomplish that, Büttner said that BMW built two 7 Series prototypes, one with Level 3 in mind and the other meant to get the automaker ready for Levels 4 and 5.

BMW formed the iNext partnership in 2016 with technology companies Intel and Mobileye. At the beginning of 2017 Delphi Automotive and Continental AG, two of the world’s largest auto-parts suppliers joined the group. Fiat Chrysler Automobiles (FCA) joined the supergroup of self-driving gurus in August, with Magna International joining the platform in October. These will be the core developing companies. After this anyone wishing to join this iNext group will have to come in as a customer. Nvidia is not involved, Intel was decided upon instead. It is of note that Tesla has decided to go with a different company than Nvidia as well.

Mobileye provides computer vision, and they are working with four pieces of the puzzle, and of course, there is a team of lawyers working on how it works with IT sharing and who owns the data and how it can be sold to other car companies. There is a contract in place for the baseline development, but using the strength of three companies will give a more significant scalable platform.

Here, a digital mapping consortium owned primarily by BMW, Audi, Mercedes-Benz, and Intel, store high-definition maps of specific roads along with permanent objects, such as buildings and traffic infrastructure.

Telecommunications providers are also an important part of the picture for the 5G roll-out for a car-to-infrastructure. A hardware provider for telematics will work with BMW to provide 5G specifications required by BMW. Some countries already have 5G, such as South Korea, and parts of Germany, but the vehicles will be ready for 5G whether the country has it or not. BMW’s partnership with Intel allows them to use the 5G that Intel has in Santa Clara, CA. If 5G is not available the car will shift back to 4G, and downward until it finds a level that is available. The car can drive without the backend connectivity for a few minutes because BMW gets the initial backend preloaded, and will not rely on constant internet connection.

Büttner said that BMW’s cars would use radar, laser scanners, lidar, and cameras, with some technology supplied by its core partners Intel and Mobileye. The 7-Series automated driving vehicle will have 26 sensors overall; 6 short-range including ultrasonic sensors for low speed, eight cameras, and five laser scanners. There are different sensors used for mixed driving, i.e., highway or city driving. The trunk is full of PC looking devices that monitor all the systems; the HD mapping data from the backend is used to link with the environmental model and create a pre-sized localization of the car. This is done to fill in the gaps of a GPS locator that is not good enough to locate a car on a centimeter base. Data sharing is a critical discussion in the community currently. The agreement between BMW and Mobileye to crowd-source real-time data using vehicles equipped with camera-based Advanced Driver Assist System (ADAS) technology is a critical enabler for autonomous driving through next-generation high definition (HD) maps for consumers. 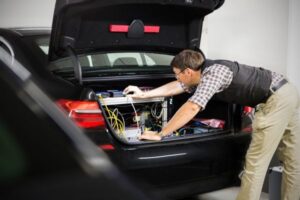 BMW autonomous driving brains are in the trunk

We got to see a video of the vision for the mapping and training for the neo-network with backend data sent to the car to used in future driving. A sequential step-by-step buildup is projected, and inline for Level 4 and five by BMW. In the future, there will be BMWs geo-fenced pilot program, and level 4-5 will be fleet operated, in separate areas that will be Level 4 and Level 5 to test worldwide, including Germany, the United States, and China. The test has to be done to prove that the car can be driven 240,000,000 kilometers without accidents to be completed. Buttner knows that it would be almost impossible to drive 149,000,000 miles which is why accurate driving simulation is needed. It is why BMW built an in-house driving simulation for Level 3-5 development.

Buttner talks in terabytes a day to show the safety requirements. Currently, there is a test fleet of 40 cars. By the end of 2018 BMW plans to have 80 vehicles in their test, 30 of the cars are level 3, the rest will be levels 4 and 5.

Buttner comes to this project with a good deal of human interface experience. With this experience, he talks about the ways to alert drivers, whether it is through, acoustic warning, ambient light (blue light on the steering wheel), display content, infotainment, active movement of seat and steering wheel. The driving will start in the US, on the Intel campus in Santa Clara, CA.

BMW shares with us its autonomous technology roadmap

BMW currently has 7-Series cars equipped with its prototype self-driving technology testing around Munich, Germany, and intends to double that number by the end of 2018, with testing on public roads expanded to the US and China.

Within the next years, we will have many car companies competing with pilot programs. Buttner says that in the end, the goal is a stable and reliable platform that doesn’t endanger the end customer.

Below is how BMW defines each Level of Automated Driving

Once level 3 is reached, it will be possible for the driver and vehicles to share the responsibility for controlling the vehicle for the first time. During highly automated driving in traffic that is moving in the same direction and is segregated from oncoming traffic, the driver will be able to perform secondary in-vehicle activities for longer periods of time or relax (eyes off). They must still be in a position to take over the task of driving again within a reasonable amount of time (a few seconds) when prompted to by the system.

From a technological standpoint, level 4 represents the evolutionary
progression from level 3. The driver will only have to take over the driving. Either in extremely complex situations or when extreme weather conditions are expected ahead. Although the driver must still possess a valid driving license at this level and be physically fit to drive, driving in “mind off” mode is theoretically possible, which would allow the driver to sleep during the journey.

The main differences between level 3 and level 4 are the timeframe
during which the driver must take over the task of driving and the ability to negotiate urban traffic in fully automated mode at level 4. At level 3, the driver must assume control again within a reasonable amount of time (a few seconds). If they fail to do so, the vehicle will automatically put itself in a low-risk situation, for example by braking to a controlled stop on the hard shoulder. There will be far more time for taking over control during automated driving at level 4.

The critical difference between level 4 and level 5 is that although the driver may take over the driving if they wish at level 5, they will never be obliged to do so.

In contrast to levels 3 and 4, neither fitness to drive nor a driving license is required for autonomous driving, dispensing with the need for a steering wheel and pedals. The vehicle takes over all driving functions. This is exceedingly complex, so the demands placed on technical solutions are extremely high. For this reason, self-driving vehicles will initially operate at relatively low speeds in urban traffic. To begin with, they will, therefore, be primarily deployed in city centers, where they will be used in delimited areas at first.
It is conceivable that the first self-driving vehicles will be brought out alongside highly automated vehicles in the period between 2020 and 2030. It is expected that the first pilot projects with autonomous vehicles will be launched in selected city centers during this decade. Giving a definite date for when this could happen would be pure speculation, however. So, highly automated vehicles will appear on motorways initially, while autonomous vehicles will start off in city centers as part of pilot projects launched in parallel. 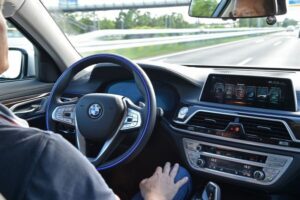