“We are in an era of transformation. I would argue that transformation is impacting the auto industry more than any other (industry). The automotive industry is currently the epicenter of innovation. Autonomous vehicles, electrified mobility, and ubiquitous connectivity are expected to transform the entire concept of transportation.”
Mike Mansuetti, president of Robert Bosch LLC

There are approximately sixty electrified vehicles expected on the United States roads in the next year or two. The International Energy Agency (IEA) recently reported that the United States is the sixth largest country of electrified sales by market share at 1.2%. Norway remains the world’s most advanced market for electric car sales, with over 39% of new sales in 2017, Iceland follows at 11.7%, then Sweden at 6.3%, China at 2.2%, and Germany at 1.6%. 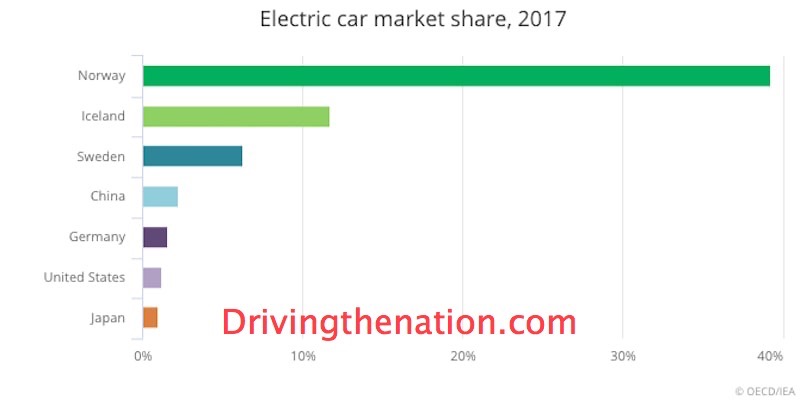 Headquartered in Germany, Bosch is a 130-year-old privately held company with revenue of $13.7 Billion in 2017 in the United States. Bosch is steadily growing, having invested over $1 Billion in the last five years in the United States. Bosch is known in the internet of things (IOT) for their sensors and mobility solutions, spending 2/3’s of its revenue in the mobility solutions category. Mansuetti said that automated, connected and electrified are the core group for the mobility solutions segment, “we know that mobility needs will fundamentally change over the next few years. We will help this change through connected mobility service solutions.”

Bosch has been acquiring companies to meet the demand that countries reduce emissions from the use of cars, buying an electric-scooter company coup, and a Detroit-based B2B ride-sharing startup SPLT (Splitting Fares Inc.), competing with the likes of Uber and Lyft. Mansuetti says that Bosch forecasts strong revenue for 2018, lead by its mobility sector.

There is a reason Bosch is doubling down on electric scooters. In the IEA report, electric two-wheelers reached 250 million. The electrification of scooters has been driven almost entirely by China, which accounts for more than 99% of both electric bus and two-wheeler stock, though registrations in Europe and India are also growing.

Electrified vehicle sales have set a new record for 2017 with more than fifty percent of global sales in China. The IEA says that in 2017 there was a fifty percent increase globally over 2016 in electric cars on the road totaling over 3 million.

Sales of battery electric vehicles are growing steadily. According to Mike Mansuetti, president of Robert Bosch LLC, “being privately held is a key cornerstone to the profitability and success of Bosch, “Long-term view, not having to report quarter-to-quarter earnings so that we’re investing in these technologies that we believe. That is really foundational. If we didn’t have the company set up as we do we wouldn’t necessarily be able to invest as early as we do in these technologies. In electrification, we continue to invest over 400,000,000 Euros a year in electrification. Nine percent is our R&D rate – compared to others that is high. We do that with a long-term focus in mind, but we also have an eye on profitability because we need those business results to help finance the future.”

Mansuetti says that Bosch does see a plan forward that allows Bosch to be profitable from the electrification components that they produce. Because Bosch is a global company that has to meet the Paris agreement they are working on a plan to have a carbon-neutral footprint by 2030 for all Bosch locations.

The global stock of electric cars surpassed 3 million vehicles in 2017 after crossing the 1 million threshold in 2015 and the 2 million mark in 2016. It expanded by 56% compared with 2016. In 2017, China had the largest electric car stock: 40% of the global total. The market share of battery electric vehicles has steadily grown in the U.S. since 2013, reaching nearly 1%. Bosch Group expects its sales revenue to increase by 2% to 3% in 2018. 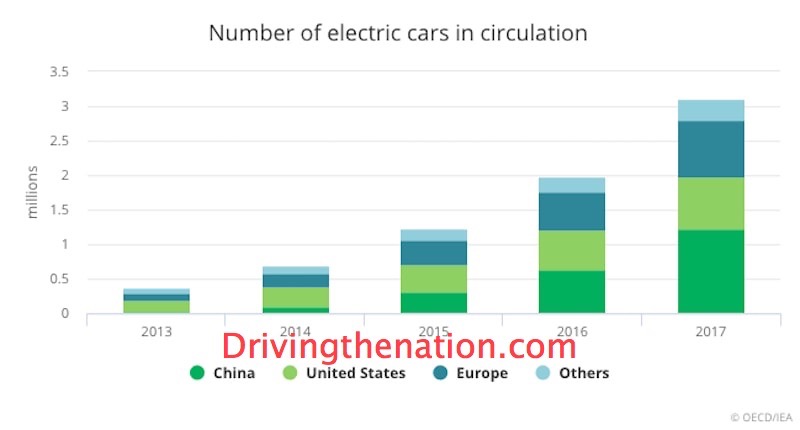 While that number is small, the rate of growth has been steady and is now expanding rapidly as battery longevity, and the fast charging electric infrastructure grows.

At an event held in Michigan last week, Bosch showcased a new system called Bosch Highway Assist. Bosch has a history of being first to market with technology that becomes standard. In 1978 they were first to market with Anti-lock braking system (ABS), in 1980 crash sensing, in 1986 traction control, in 1988 Rollover sensing, and in 1995 Electronic Stability Control (ESC). Highway Assist is a partially automated driving system installed in the 2018 Maserati Ghibli, Levante and Quattroporte. It aids the driver by taking over the vehicle’s longitudinal and lateral guidance. This partially automated driving (SAE level 2) function automatically brakes and accelerates and actively steers at speeds up to 80 mph.

Bosch showed us a technology they are working on called connected parking solutions that shows you public parking spaces in your area, how much the space cost per hour and the likelihood that parking space will be open when you get there. 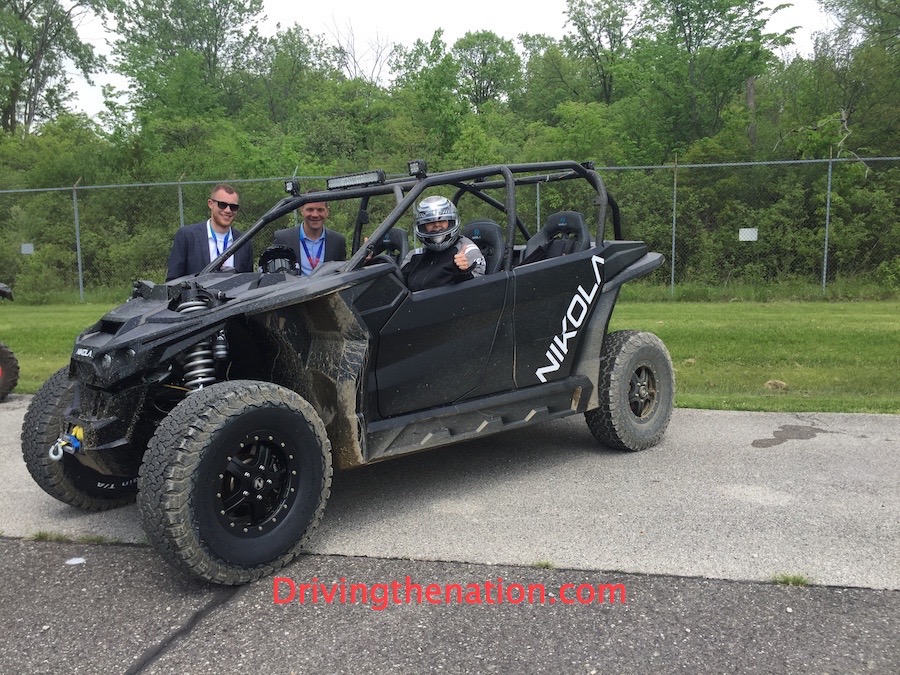 My favorite was the Nikola NZT electric UTV. The Nikola Terrain Vehicle is the most advanced in the world with 590 horsepower produced from the state-of-the-art battery and four-wheel-independent motors. Thanks to the low-end torque from the battery the 0-60 is less than 3.5 seconds. Watch out Pismo Beach, here we come! The best news is, zero emissions and 150-mile driving range!

A really cool item for long-haul truckers is the mirror camera system (MCS) that replaces the traditional side view mirror by combining a traditional with a camera and two 15-inch monitors mounted on the A-pillar. This reduces blind spots and fatigue of the driver. 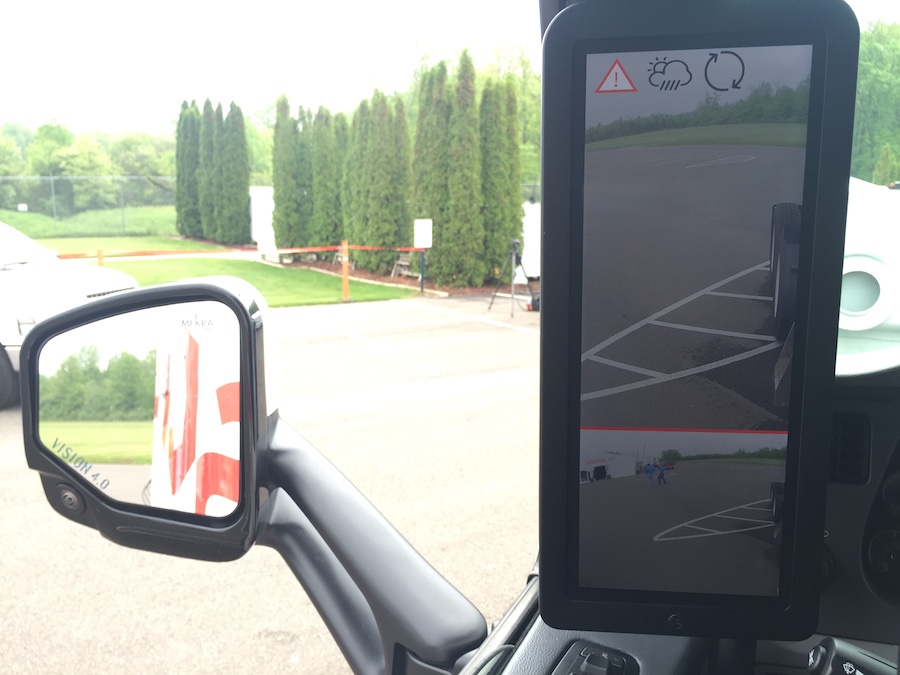 A camera on the mirror, a monitor on the A-pillar

What is an electrified vehicle?

There is a difference between electric and electrified.

Hybrid electric vehicles (HEV), such as the Toyota Prius, use an internal combustion engine supported by electric motors and a battery. You cannot charge a hybrid with electricity.

Plug-in hybrid electric vehicles (PHEV) are similar to hybrids, but the battery can be plugged in for electricity, and when the electricity is depleted the internal combustion engine runs the vehicle like an HEV. A good example is the

Battery electric vehicles (BEV) use electric motors powered exclusively by a battery that needs to be plugged into the car to charge it.

Fuel-cell electric vehicles (FCEV) use a fuel, such as compressed hydrogen, to generate electricity that then powers the motors.