Last week I wrote that the Volvo XC 90 will be the first plug-in hybrid SUV. I should have said in the United States. China already has plug-in SUVs and the BYD Tang SUV plug-in hybrid has sold more than 12,000 units so far this year. Warren Buffett owns 10% of BYD.

What’s everyone going to do for the memorial weekend. Stretch will put the American flag out this weekend. Both his Mother and Father were in the military. His Mom was a Women’s Army Corps (WAC), and his Dad landed at Omaha Beach. My Great Uncle, Fred Larson, was in the 13th Battalion SeaBee.

I also drove the 3-row Ford Explorer Platinum 4WD, $55,155 with an EPA fuel estimate of 16 city/22 highway/18 combined. It made me think of the chatter a couple of weeks ago that wanted something other than a Chevy Suburban. If you are reading this, have you looked at the Ford Explorer?

The Sportage is one of the best and most enjoyable compact SUVs available. 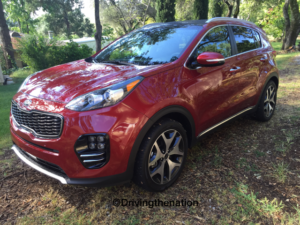