Cadillac autonomy in 2017 and SAE standards

Two years ago at the International Consumer Electronics Show (CES) Audi of America showed a group of journalist an Audi that could let you off in front of a hotel, and with programming on a smartphone, park itself, turn itself off and wait till you called it again to meet you at the front door.

Google Autos and Continental AG both have the red license plates that allow their autonomous prototype vehicles to test-drive the highways of Nevada hands-free. At the 2014 Intelligent Transport System (ITS) World Congress in Detroit, MI Chief Executive Officer Mary Barra announced that a 2017 Cadillac model would feature “supercruise” technology, a term GM is using to denotes features of autonomous vehicles such as acceleration and braking in stop-and-go traffic or at highway speeds.

General Motors was the first company to produce the plug-in hybrid, or range extender, in the Chevy Volt, followed by the Cadillac ELR. As Mary Barra, CEO of General Motors, pointed out in her speech ar ITS, “Boss” won the DARPA challenge in 2007.

The Grand Challenge was an off-road robot competition devised by DARPA (Defense Advanced Research Projects Agency) to promote research in the area of autonomous vehicles. The challenge consisted of building a robot capable of navigating 175 miles through desert terrain in less than 10 hours. The coordinates are given to the teams the morning of the race, but once the race has started, there is no human intervention allowed. On October 9, 2005, thanks to Stanley finishing under 7 hours and averaging over 19 mph on the course, the Stanford Racing Team was awarded 2 million dollars for being the first team to complete the 132 mile DARPA Grand Challenge course in California’s Mojave Desert.

The second DARPA challenge in 2007 proved better for Carnegie. Carnegie Mellon University won the urban challenge with a fully autonomous Chevy Tahoe named Boss. Instead of being out in the desert navigating hills, The Boss navigated 60 miles of mixed traffic, intersections and stop signs 20 minutes faster than the runner-up.

What is Super Cruise?

That’s the working name for the General Motors semi-automated driving technology that allows for hands-free driving on the highway – both at speed and in stop-and-go driving.

It will include technology such as adaptive forward lighting, rear vision cameras, blind-zone monitoring, and lane-keeping. GM will also be adding more nameplates that offer adaptive cruise control and collision-imminent braking.

GM will also enter the vehicle-to-vehicle (V2V) technology world in 2017 on it’s 2017 Cadillac CTS, a world that enables cars to communicate with each other. 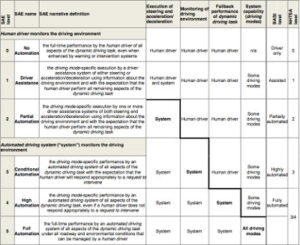 Standardized levels of autonomy by the Society of Automotive Engineers (SAE)

The Audi A7 Piloted driving car had great capability at this year’s CES. It is considered Level 3 automated driving on SAE’s SAE J3016 – levels of vehicle autonomy ranking of 0-5 automated scale, with level 0 being no automation and level 5 is fully automated, which includes the car being able to;

* Monitors driving environment when activated
* Executes longitudinal (accelerating, braking) and lateral (steering) portions of the dynamic driving task when activated
* Deactivates only after the human driver takes over or vehicle reaches its destination
* Transitions to minimal risk condition as necessary if failure in the automated driving system occurs
* May momentarily delay deactivation when immediate human driver takeover could compromise safety

Cadillac and Mercedes-Benz Intelligent Drive are Level 2 — one notch up from adaptive cruise control, lane-keeping, etc.

The reasons are fairly obvious — you need a high percentage of cars on the road with V2V capabilities to make it work well.

And V2I infrastructure seems remote in a significant way with state and federal budget strained.