Haters are going to hate

Oh no, another reason to hate California! Manufacturing of electricity in California is changing, and it is showing up as fewer emissions and more in-state energy produced and used in California.

The California Air Resources Board (CARB) came out with the executive summary of emissions from 2000 to 2017. For the first time since California started to track GHG emissions, in-state, and total electricity production from zero-GHG sources exceeded generation from GHG emitting sources. Zero-GHG sources include solar, hydro, wind, and nuclear. 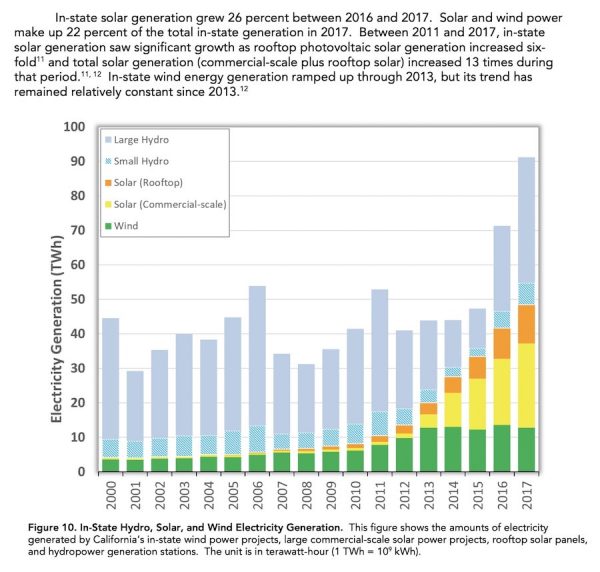 While former Governor Brown lamented about how much Californians drive, transportation emissions in the Golden State saw a 1 percent increase in emissions in 2017, the lowest growth rate over the past four years. The transportation sector remains the largest source of GHG emissions, so a decrease in the increase is an important step forward.

We’re making more money with fewer emissions. Emissions from the electricity sector account for 15 percent of the inventory and show another significant drop in 2017 due to a substantial increase in renewable energy.

Why are so many people in California getting solar panels?

People, even in California, like to make money and they want to keep their money. As the population ages, they are looking at how much money they will have in retirement and how many bills they will have outstanding.

The average household led by a retiree is $48,000 annually before taxes, and the same family spends approximately $46,000 a year. These figures came from the Bureau of Labor Statistics’ (BLS) measure of the income and outflow of “older households,” meaning a household headed by someone 65 years old or older.

In 2015, the California Public Utilities Commission (CPUC) said California’s average electric rate pay an average of 16 cents per kilowatt-hour (kWh), among the highest rates in the nation. By 2018 the price rose to 19.90/kWh and 20.87/kWh. CPUC says that in 2015 at $90 per month, Californians’ electric bills are among the lowest in the 50 states. The monthly average in 2017 is now around $110 and continuing to increase. The comparatively low average bills are attributable to the fact that the electricity consumption per capita in California homes has remained among the lowest in the nation.

As a solar panel owner, I wasn’t as concerned with the emissions as I was getting rid of a fixed expense in my retirement years. I got rid of an electric bill, and I got rid of a gasoline bill through my electric car using clean energy from my solar panels. Not only that, the electric companies give me another break because I have an electric vehicle.

That is how California is achieving fewer emissions with a higher GDP. People who have money are investing in their future, and California is making it financially attractive to do so.

My electricity and gasoline bill average $600 a month. That’s around $7,000 a year. Times that by the next twenty years and tell me what you would do with $150,000 extra in your pocket because that is what you would have if you were me.

Haters are going to hate.