According to the California New Car Dealers Association (CNCDA) 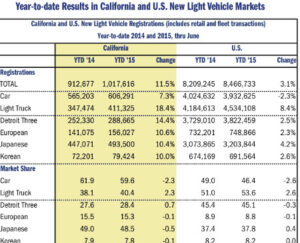 New light-vehicle registrations in California exceeded one million units during the first six months of 2015 and improved 11.5 per- cent versus the first half of 2014. The market was up an impressive 105 percent from the recessionary low-point in 2009. The combination of strong consumer affordability, pent-up-demand, and perhaps most importantly, the impressive array of advanced technologies being offered on new cars and trucks continues to boost the state’s new-vehicle market. The momentum should continue into 2016, as well. Registrations for all of this year are expected to approach two million units, with another increase likely in 2016. Other key trends in the state market:

❏ Among the top 15 selling brands, Jeep, Subaru, Mazda, Lexus, Chevrolet, and Mercedes had the biggest percentage increase during the first six months of 2015.

❏ Used vehicle registrations increased by less than one per- cent. Three-year-old or newer vehicles were up 13.8 percent. 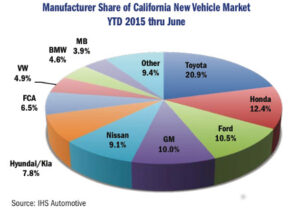