The threat of survival is real

The question was posed on my local Facebook page, “Is anyone wondering where to live in the future? I’ve always lived in the West. I don’t know if I can keep doing this!”

The thing she was talking about was the wildfires. The California wildfires have covered California in a blanket of smoke are literally taking the breath out of Californians. She is not alone. People on the thread were answering, including a Fifth generation Californian. California residents are fleeing as air quality suffers, and the conversation of where to flee to is becoming the subject on many Facebook posts.

California Air Resources Board (CARB) has the most stringent air quality requirements of any state when it comes to vehicles. It won’t matter how clean vehicles are if California can’t figure out how to manage the fires.

Placer County just fought to have the County open up from COVID-19. People were fighting with each other about whether there was a real need to wear a mask. Now they can’t go outside at all without a mask because of all the ash they will ingest. The threat of survival has superseded any discussion about the political aspect of wearing a mask.

There is a debate on another forum regarding climate change and the mismanagement of the federal lands. There is a case to be made that climate change is real when California gets over 11,000 lightning strikes and starts almost 400 fires. The same people who take advantage of every loophole to not pay taxes are the same ones who are the most vocal about needing more funds to clear the forest. 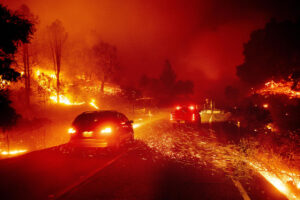 californians flee the fires and the state

Not the Golden State anymore

There are many reasons to leave California and many to stay. One friend left California because of the civil unrest in the little town they lived in, “I’m happiest in nature, and there are just too many people in California. Driving the highway every day was a good indication of how rude and mean people can be.”

The big question many of the people have is where they move to when they leave California. Almost 700,000 people moved from California to another state last year. Some people considered Oregon or Washington, but those states have never before seen fires in their states.

Many are considering Canada, even though Americans are not allowed into Canada currently because of COVID-19. Anyone that has the ability to get a Canadian passport is starting the process now. I heard from a friend that Canadians as far North as the Sunshine Coast, Gibsons Beach in British Columbia, are getting the smoke from the USA fires.

Each state has its own problems, including humidity, mosquitoes, hurricanes, expensive septic systems, no water. A couple of people have bought vans and are spending their time roaming the United States instead of paying rent. Some friends just got back from spending two weeks in the Grand Canyon, something they probably wouldn’t have done if they hadn’t lost everything in a fire.

California still has time to do what they can to alleviate the climate change and the clearing of the forests. Most people are solidifying those plans, and it will take them about six years. There are still months of sunny skies and moderate temperatures that make California so tempting.

The people that are buying vans and bikes and heading out of California talk about staying in the national forest or Bureau of Land Management (BLM) lands for quiet space. When they need facilities, they go to the state campgrounds.

Others are going international, to Bali, Indonesia, Italy, France, and Spain. What they are looking for are a world with less anger and more safety.

The take away from the post is that each person has to consider which climate-related effect you can deal with emotionally, financially, physically.

California dreaming may just be that for many, only a dream of yore.