Car survivors and thrivers of 1st half of 2020

Pickup share has been resilient in the wake of COVID-19
CUVs are gaining slightly, with increased share year-over-year
Car segment shares continue to decline
EVs gaining slightly, while plug-ins are declining
Improvements underway across the luxury segments
Looking ahead to the balance of the year, the IHS Markit 2020 US outlook has been upgraded to 13.6M units

Who knew 2020 could be such a cluster? No one. The COVID-19 pandemic began affecting the US light-vehicle market in March. It created a massive volume drop in April and overall had a significant impact on registrations in the first half of 2020.

Over the first six months of the year, US registrations declined 22.8 percent year on year (y/y). Let me reiterate this, a 23% drop in half a year! Barring the introduction of further shutdowns, either regional or national, the registration figures for April expect to represent the lowest point of 2020, with the declines from May through July becoming progressively smaller.

IHS Markit has reviewed the first-half registration data for early signals of changes in consumer behavior. While I normally wouldn’t question IHS, this is 2020. The year of the murder hornets, the plague, hurricanes, fires, online classes instead of in-class. I hold no hope for 2020 auto sales, but we’ll go with what IHS says.

Market shares of the non-luxury mid-size pickup and full-size three-quarter to one-ton pickup truck segments also increased. The three segments combined claimed 20 percent of US registrations in the first half of 2020, compared with 17 percent in the first half of 2019. The half-ton and mid-size pickup segments saw the highest gains of market share, with mid-size pickups gaining 0.7 percentage points of share and accounting for about 4.2 percent of US registrations. The three-quarter to one-ton pickup segment gained about 0.5 percentage points of share, to 4.1 percent.

The larger truck segment’s registrations declined 11.5 percent y/y in the first half, still notably lower than the 22.8 percent y/y decline of the overall market.

The non-luxury full-size half-ton pickup segment is the largest of the three light-vehicle pickup segments (as defined in IHS Markit registration data), with registrations reaching more than 768,000 units in the first half, down 9 percent y/y. These vehicles tend to bring in higher revenue and profit margin. Their comparatively strong performance in the first half of the year benefited the financial results of Ford, Fiat Chrysler Automobiles (FCA), and General Motors (GM). 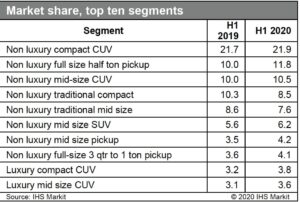 Despite a decline of 22.2 percent y/y in the first half, the non-luxury compact CUV segment saw its market share increase slightly, up 0.2 percentage point.

Registrations in the luxury compact CUV segment, at just over 245,000 units in the first half, declined 8.8 percent y/y, although the market share of the segment increased 0.6 percentage point to 3.8 percent.

This segment includes the Hyundai Palisade and Kia Telluride, selling well in the US market since their respective launches. The Palisade launched in June 2019, so it wasn’t a factor in first-half 2019 sales. Telluride sales started in March 2019. It was only available for part of the first half of 2019; Telluride is built in the US, however, and inventory is affected by the nearly two-month shutdown of US production.

Luxury mid-size CUVs also picked up some market share in the first half, increasing from 3.1 percent to 3.6 percent. The segment also benefits from the all-new Lincoln Aviator and Cadillac XT6 and the Tesla Model Y.

The market share of cars will continue to erode as model lines cease. There was an announcement that several subcompact cars would cease in July, including the Chevrolet Sonic, Honda Fit, Toyota Yaris, and Hyundai Accent hatchback. In the first half of 2020, the non-luxury traditional subcompact car segment’s share of total US registrations dropped to 2.6 percent, compared with 3.4 percent a year earlier.

However, there are also new subcompact CUV-looking entries, essentially acting as entry vehicles. While the market positioning of models such as the Hyundai Venue and Nissan Kicks is that of a CUV, they are classified as cars by the US Environmental Protection Agency and, therefore, as cars in IHS Markit registration data.

While not all rental-fleet orders were for cars, the loss of orders from major rental-car companies from Hertz to Avis had an impact on the first half as well. Those canceled orders coincided with production shutdown as well, and as production resumed, automakers in some cases shifted planned production from rental-car fleet vehicles to vehicles configured for retail. Benefits from that change would be seen in the second half, however.

HEVs have the largest market share of electrified vehicles, as the solution has been available the longest. In the first half of 2020, HEVs’ share improved to 3.13 percent of the total market, from 2.97 percent in the first half of 2019. The share reflects the fact that there are more HEV-equipped models available than EVs or PHEVs, as well as that US consumers have grown comfortable with the technology in more than 20 years since the Toyota Prius first arrived in the US.

The outlook for PHEVs may change as the year progresses, and the Toyota RAV4 Prime and the Ford Escape PHEV offer a new, affordable choice in the largest segment in the US. In 2018, there was an influx of new PHEVs, and the market share of this model type spiked but was not sustainable. US consumers are not yet warming to the solution. 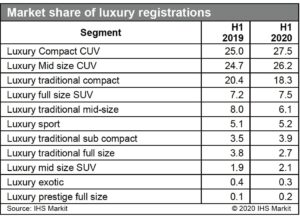 Not unlike the broader market, luxury car sales continue to decline. In the luxury arena, the luxury traditional compact and mid-size segments are also the largest car segments. As a share of luxury registrations, luxury traditional compact cars claimed a share of 18.3% of luxury registrations, down from 20.4% in the first half of 2019.

In the first half of 2020, there was the impact of economies being closed essentially to help slow the spread of the COVID-19 virus, including restrictions on US manufacturing that halted light-vehicle production for about two months and restrictions on dealership operations. Sales were also affected by wary customers in US states that did not close down activities and significant levels of job loss throughout the country.

US light-vehicle registrations have been improving since the period of most restrictions in April; however, registrations declined nearly 23 percent y/y in the first half of 2020. Since the lockdown period ended, it seems that consumers with the means to buy and an interest in buying a vehicle are doing so – and that their purchases were largely in the same segments as prior to the pandemic.

Assuming there are no further major government lockdowns in 2020, which the IHS Markit baseline forecast does, US light-vehicle sales will drop to 13.6 million units in 2020, from 17 million in 2019, according to our August forecast.

However, looking at the first half of the year, the general trends from 2019 largely continued, although pickup truck registrations gained share. EVs continue slowly to gain market share, although much of that is attributable to Tesla, Chevrolet, and Audi gaining ground.

Luxury registrations also continue to gain ground; over the first half of 2020. Some of this may be a result of most of the jobs lost due to COVID-19 lockdowns and operations restrictions affecting lower-wage hourly jobs. Many with higher-paying office jobs were able to shift to a work-from-home model and less economically impacted.

We continue to see automakers adjust their product portfolios, with several subcompact cars getting the ax to make room for new utility vehicles. IHS Markit expects the market’s sales recovery to be over years, with the US not seeing 17 million light-vehicle registrations annually again through 2025. Against that backdrop, we may see further product portfolio adjustments; in a lower-volume environment, the cost of maintaining a low-volume, low-margin product in this market may be prohibitive.

Another factor that impacted registrations in the first half of 2020 was the impact of COVID-19 on rental-car companies. There were many canceled orders as the US stay-at-home orders and reduction in business and vacation travel cratered rental-car demand, even triggering bankruptcy procedures for Hertz.

Automakers have also reported shifting some of the production they had planned for rental car fleets to retail cars, following the canceled order and as production resumed in June. In making that change, automakers may be able to soften the impact of lost rental fleet orders for the year.