Cars that are lighter, faster and more fuel-efficient

There are many reasons to make a car lighter including power-to-weight ratio that makes you go faster and have more fun. Another reason would be less costly if you are taking parts out of the vehicle. The number one reason to make cars lighter these days is for fuel-efficiency. Car companies are under siege to build cars with better miles per gallon (mpg).

“Our government’s crash tests provide unequivocal evidence that mileage has improved along with safety,” said CFA Executive Director Jack Gillis. “For the Trump Administration to base any part of the fuel economy rollback on safety concerns is flat-out wrong and completely ignores the facts that they, themselves, have produced.” 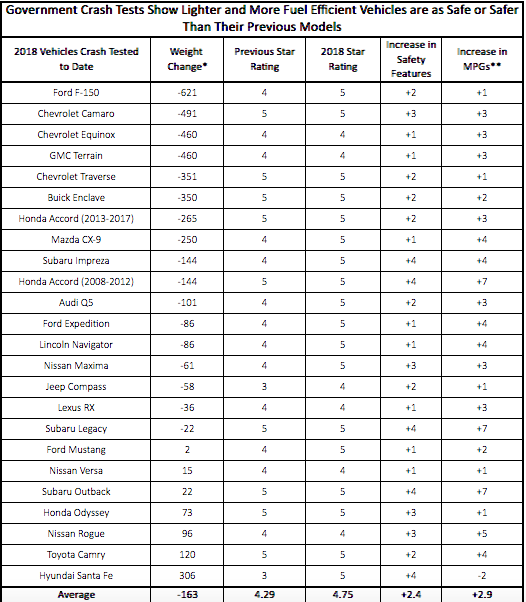 *Difference in weight of the current model from the previously crash tested model.
** MPG change between the exact two models tested. In most cases, other versions of the vehicle had greater improvements in fuel economy.
Source: EPA and NHTSA

The research concluded that, based on NHTSA’s own 2018 crash test results, 23 of the 24 models had better fuel efficiency. There was not a vehicle that got a lower safety rating, but ten cars that got better ratings.

Reducing Weight and Improving MPGs Does Not Degrade Safety. CFA reports that as Fuel Efficiency Increases, So Have Critical Vehicle Safety Features:

* The Ford F-150 decreased its weight by 12.3%, increased its fuel economy by almost 6%, and the government IMPROVED its crash test rating from 4 to 5 stars.

* The Mazda CX-9 decreased its weight by 6%, increased its fuel economy by over 21%, and the government IMPROVED its crash test rating from 4 to 5 stars.

* The Audi Q5 decreased its weight, increased its fuel economy by almost 14%, and the government IMPROVED its crash test rating from 4 to 5 stars.

* The Lincoln Navigator decreased its weight, increased its fuel economy by over 26%, and the government IMPROVED its crash test rating from 4 to 5 stars.

In addition to crash tests, CFA also examined 17 critical safety features and found that all of the 2018 models increased the number of safety features available by an average of 2.4 — clearly showing that today’s vehicles are safer and more fuel efficient.

Of these 24 vehicles, all but one increased their fuel efficiency and every one had equal or better crash tests and more safety features than the previously crash-tested version of the vehicle.