Cars that are mentioned the most in music by Musicians

Oh Lord, won’t you buy me a Mercedes-Benz my friends all drive Porsches I must make amends. ~ Janis Joplin

For generations, musicians have been singing about cars. GoldEagle.com used information from the lyrics.com database and put together the number of times a vehicle was mentioned and found the most mentioned car, by genre and musician.

There were a couple of surprises and some reassurances. Mercedes-Benz is still the number one car sung about, since the time the iconic Rocker Janis Joplin sang about the car. While Country Music and Rock-n-Roll were the groups that used to sing about cars the most, it is now hip-hop.

The most mentioned cars in song lyrics, according to the data, are Mercedes (which had 4,746 mentions), followed by Cadillac (with 2,923 mentions), Bentley (with 1,400 mentions), Chevrolet (with 1,306 mentions), and Jeep (with 1,127 mentions). Jaguar, Porsche, Ford, Dodge, and Lexus were also heavily mentioned in songs. courtesy goldeagle.com and lyrics.com

Either Hip-hop artists love their cars, or they’re getting paid big bucks to sing about them. 94% of the top 100 musicians who reference cars the most in their songs are hip-hop artists or rappers.

Lil Wayne, The Carter, is a human being that loves cars of all types, so much so that he referenced them 370 times in his lyrics. There is not one car that stood out as being mentioned in his songs

Jay-Z, on the other hand, has an affinity for Lexus and had 354 car references in his lyrics. I guess he had to save some lyrics for lemonade.

Coming in third was my guy Snoop Dogg, who had 326 car references in his lyrics. Fo Shizzle That Big Bad Chrysler Really Does Sizzle was the commercial Snoop did with Lee Iacocca, and yet it was Cadillac he sang about the most.

Rock and Roll’s Bruce Springsteen has sung about cars 88 times in his lyrics, with Ford being the number one mentioned car manufacturer. Johnny Cash still holds the record for cars in Country Music at 73 car references in his songs. I guess that big brass bed had wheels on it because folk musician Bob Dylan beat Cash out by singing about cars 85 times. 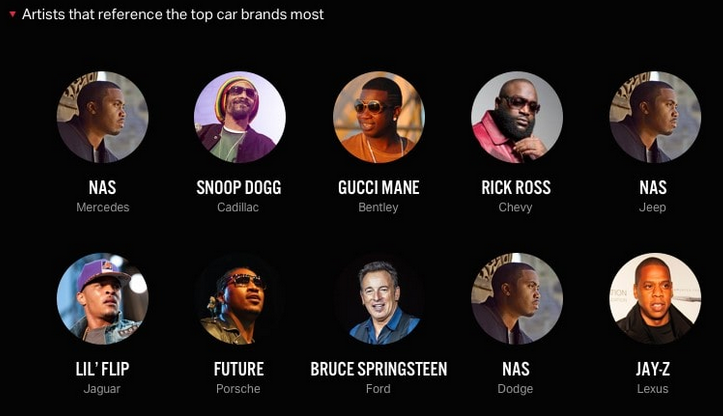 The next big question would be, do these songs help sell cars?