I went to Detroit this week and visited General Motor’s Energy center. I got to see the lab where they tested the batteries for the Chevy Volt and the Chevy Bolt. It’s amazing how far batteries have come just in my time; from lead-acid batteries to Nickel Metal Hydride to Lithium-ion batteries.

When we think of drivers using apps to get around we think of cars. Continental has an app for motorcyclists to help them get around. The technology is called eHorizon, and it will debut for motorcycle riders at the Consumer Electronics Show in January. I talked to Hans Hiebl at the LA auto show about eHorizon.

This week I drove the Nissan Rogue SL AWD hybrid. Love that vehicle. Love that Nissan is starting to get serious about hybrids would like to see Nissan come out with plug-in hybrids. The competitor is a Toyota RAV4 hybrid, which starts around $28,000 and has an EPA of over 30 mpg. Nissan didn’t give me the price or the EPA estimate, but I got 25 mpg. The Nissan Rogue S AWD starts around $26,000 and is supposed to get 26 city/33 highway. 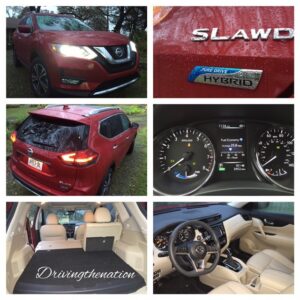