Brenda Priddy is well-known worldwide for her photography. Since 2013 Priddy has been traveling to Cuba under the people-2-people license, which falls under the educational category. It’s currently one of the 12 categories that Americans are allowed to visit Cuba. 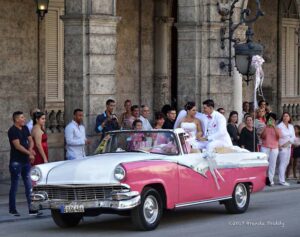 Classic cars, culture, and coffee in Cuba by Brenda Priddy

Priddy puts together small groups with interests in the arts, music, architecture, history, and, of course, the car culture in Cuba, “We usually have up to 10 people on the trips, and we try to give an authentic look at Cuba, and extensive interaction with the people. We usually stay in casa particulars (private homes, B&Bs), and offer an experience that you won’t get anywhere else.”

Priddy is in the planning stages of her next tour, working on an early November departure. The list of the cities will be announced shortly. If anyone wants to get on an interest list, they can contact Priddy at [email protected] And if you are thinking of going, now is the time to either get a passport or check the expiration date on your current one. For a November trip, your passport has to be good through May 2018. You should also have at least two empty pages in your passport. 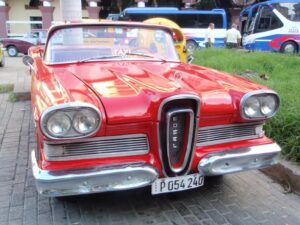 Automotive Hall of Famer, Author, historian, curator, and Concours judge, Ken Gross, went to Cuba with Priddy, “It’s like stepping back in time. The culture, La Comida, and the cars are wonderful.
Brenda knows Cuba well — and so will you if you accompany her to Havana.”

“Besides, where else will you find an Edsel taxicab?”

The pictures attached were all taken in Havana on Priddy’s last trip a few weeks ago, and are some of her favorites. 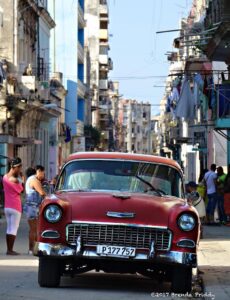 Classic cars, culture, and coffee in Cuba by Brenda Priddy