It’s been a busy New Years for me, but before we get to that let me give you the good news. The Washington Auto Show has given us some tickets to give to you! If you can go to the show on January 22, send me an email at lou at drivingthenation.com, and I will get as many of you in as I can.

January 1st Stretch and I were front and center at the 127th Tournament of Roses Parade. This is Stretch’s favorite parade of the year, so we drive from Northern California to Pasadena, California to watch it. If you want to see the floats, bands, and equestrians you can follow Nellie and me here.

We spent December 30 in Fresno at the Best Western. Why that hotel? Because the Best Western was the only hotel in Fresno we could find that had an EV charger and we were driving the Chevy Volt. Yes, gasoline is cheap, but the electricity was free. We’ve gone over 1,000 miles so far and spent about $30 on gasoline. Today we leave Las Vegas, NV to go back to Auburn, CA starting with 50 miles of electricity and a tank full of gas.

From Pasadena, we drove to Las Vegas, Nevada for the Consumer Electronics Show – CES, the first auto show of the year. Yes, it is the largest technology show, but almost every automaker is showing present and future technology here. I don’t have all the videos up (we periscoped them and are putting them on youtube and www.drivingthenation.com today), but you can see some of the fun stuff here.

Secretary Fox, DOT, was also here, and I think this is something the good folks of DC would be interested in participating in. At a conference with Qualcomm, Bosch, and mobile eye Secretary Fox announced that if your city has over 200,000-850,000 your city could win $40 million if they come up with the winning plan for city mobility, including ways to reduce climate change, not specific, based on their context. Mobil-eye will include real-time big data to help the city create a plan.

Go to transportation.gov to see all the rules, and go to your city council and see if they are trying planning for the future and the money.

Faraday, a company, backed by a billionaire – or multi-millionaire, depending on how the stock market goes in China, started the CES extravaganza with a car project that is said to go 0-6- in 3 seconds. Faraday says they will build the car in Nevada, north of Las Vegas and be quicker going to market than Tesla. Quicker is not always better Faraday. More profitable is what you should be looking towards for the future.
Cool gadget non-car related – a rechargeable battery that you can open up and charge via an external portal charger. You no longer need to plug a charger into the electric outlet, just plug it into the battery pack you carry to recharge your smartphone.

Next hot EV accessory – a Bosch portable EV charger. The Chevy Bolt product manager, Megan, said the Bolt can be 80% charged in 30minutes. Imagine being able to go 150 miles to a friend’s house, with your portable battery charger, plug it into the 240 electric outlets in the garage, have dinner and come back home. It’s the wave of the future.

Continental showed off the sideless mirror replacement – car mirrors and those big honking truck mirrors – can be replaced with a camera that can see to your right and your left, and to the rear. How do you see what’s to the right and left? On the right and the left side of the dash are two nav screens and in the middle is the nav screen for the rear-view picture. The rear-view picture is on all the time, not just when you’re backing up. BMW announced they would have cameras instead of mirrors on the side of their cars.

Ford announced a truck-to-drone agreement with DJI and the United Nations, a lidar the size of a puck -significant for the autonomous vehicles they are working on.

General Motors announced that they bought part of the ride-sharing/taxi service Lyft – and what better car to use as a taxi around Las Vegas than a 200-mile range EV that costs under $30,000 named the Bolt.
Panasonic had the Tesla (with Panasonic batteries) and the Acura NSX on their stage, the NSX with the Panasonic surround sound that felt like it could propel the car itself.

The biggest news for me was from Toyota. Toyota has created a Toyota Research Institute (TRI) that will have offices located at Stanford and MIT. The members are all engineer types from Darpa, Google Robotics, Stanford, MIT, all discussing and developing autonomous vehicles.

First announced in November 2015, Toyota says the “TRI is a research and development enterprise designed to bridge the gap between fundamental research and product development. Funded by an initial five-year, $1 billion investment, it has been launched with mandates to enhance the safety of automobiles, with the ultimate goal of creating a car that is incapable of causing a crash; increase access to cars to those who otherwise cannot drive, including the handicapped and the elderly; help translate outdoor mobility technology into products for indoor mobility, and accelerate scientific discovery by applying techniques from artificial intelligence and machine learning.”

As always you can answer here or email me at lou at drivingthenation dot com. 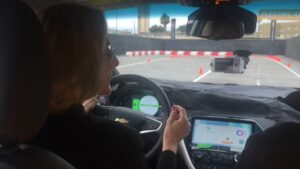