I’m so excited! Last year you kept asking if Warren and I were going to be at the auto show together and we didn’t get it together quickly enough to make it happen.

IT GETS EVEN BETTER! EACH WEEK WE’RE OFFERING TWO FREE TICKETS TO THE FRIDAY SHOW. We’re still figuring out how to do that, but stay tuned.

Is everyone getting their Christmas shopping done? What are some great presents you’ve bought for the car?

I found this really cool jump charger that can charge your car or charge your smartphone. It’s called the Cobra JumPack CPP 8000. For a little over $100, you can throw it in your purse and not worry again.

Chevy announced the pricing for the new 2016 Malibu. The entry-level 2016 Chevy Malibu hybrid starts at $28,645. The all-new hybrid powertrain, which leverages technology from the Chevy Volt, is expected to get an estimated 47 mpg combined.

The 2016 Chevy Malibu prices are

Chevy Malibu is one of the North American Car of the year contenders.
The other two are the

Honda Civic and the

Nissan Titan, and the

Which do you think will win?

Tell me – when you’re buying a vehicle do you look at the carfax report? How important is the automobile history of the car? What are the most important issues in the automobile history of a used car do you look for when purchasing a car? Are they service records, accidents, etc. Would you pay more for a car if the owner is able to show you all the records for the car?

As always you can answer here or email me at lou at drivingthenation dot com. 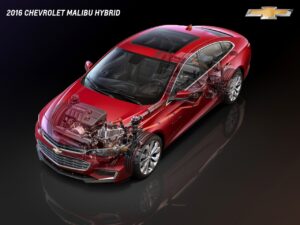