California has saved almost 50,000,000 gallons of gasoline a year by using less than 175,000 alternative technology vehicles.

If California hadn’t instituted rules that required companies to use better fuel economy technology, we wouldn’t have these cars on the market. These are two very important points to remember as you read this article.

President Donald Trump is expected to travel to Ypsilanti, MI to talk to the auto industry on Wednesday at 2 pm.

The EPA is considering reversing California’s waiver under the Clean Air Act that allows it to set vehicle greenhouse gas (GHG) emissions standards for California and any other state that wants to follow California’s standards.

If EPA reverses California’s waiver can it overturn SB32? The Zero Emission Vehicle (ZEV) mandate is wound up with the waiver. How much can be done? For the best answer from the person that would really know, I went to Senator Fran Pavley, the woman that co-authored AB32 and authored SB32, the bills that require fuel efficiency standards to average 54.5 mpg by 2025.

Pavley sent me an email, explaining the process, “We didn’t need waivers for (Assembly Bill) AB 32 and (Senate Bill) SB 32 which are multi-sector Green House Gas (GHG) reduction measures, but we did need waivers to implement the vehicle emission laws when we reduce GHG or other air pollutants that are stricter than the Federal standards.”

“So, policies such as energy-efficient building standards or appliance standards, or our 50% renewable energy standards, etc. are not at risk and not subject to an EPA waiver.”

“What is at risk are our vehicle emission standards under AB1493 and the 2012 federal policy that combined California’s Clean Car standards with the U.S. Department of Transportation (DOT) Corporate Average Fuel Efficiency (CAFE) (fuel efficiency standards). We have heard that the Trump administration wants to delay or roll back the 2012 agreement that the auto companies had once supported. This agreement would require all cars and pickups to get better fuel efficiency by 2025 averaging 50 mpg. We think they can and should meet these standards that will clean up the air, reduce climate change pollutants and dependence on foreign oil. These standards also created a market for electric and fuel cell cars and other cleaner alternative vehicles.”

“Most experts think that Congress and the EPA may try to completely take away California’s waiver sometime this year. This will be a huge legal and environmental fight with California and other states who have adopted our vehicle standards.”

California car sales by the numbers

California bought 2,086,966 vehicles in 2016, twelve percent of the Nation’s vehicle. Of those vehicles, 3.5 percent were Plug-in Hybrid Electric Vehicle (PHEV) and Electric Vehicles (EV), totaling 73,573 sells. If you add in hybrids, you have 8.2% of total car sales going to alternatives.

Yes, hybrid sales are decreasing in California, but plug-in hybrids and Electric vehicles are increasing, and those are important numbers to watch. The difference is the amount of gasoline used per vehicle.

With the help of Chevrolet and a website that has a microcosm of Volt owners we figured out that in January 2017 Volt owners used 8 gallons of gasoline the entire month and, of course, EV owners used NONE. NADA. ZIPPO. 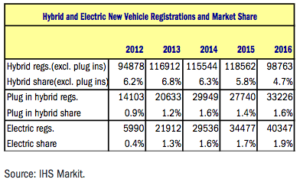 If California hadn’t instituted rules that required companies to use better fuel economy technology, we wouldn’t have these cars on the market.

California buys over 2,000,000 vehicles a year. Combine that with twelve other states and Canada which have also adopted the California standards. That’s an estimated 35-40 percent of the market. Add in Midwest Evolve and Jumpstart Maui and President Obama’s electric energy highway that Vice President Joe Biden talked about at the Detroit Auto Show and you’ve got advanced technology vehicles and an infrastructure already in the works.

Why does the Auto Alliance want President Trump and EPA administrator Scott Pruitt to open up the mid-term report?

Gloria Bergquist, ‎Vice President, Alliance of Automobile Manufacturers explained the reasoning for the review with President Trump and EPA Scott Pruitt, “Auto manufacturing is highly competitive, so seldom do the world’s automakers come together. But they did in February when 18 automakers wrote President Trump. Automakers were united in their support for putting “the process back on track” for a government review of 2022-2025 fuel economy standards. Without pre-judging the outcome. Checking prior assumptions against new market realities. Driven by current data.”

Both sides do agree that California has created an infrastructure for Electric Vehicles and that is the biggest part of the reason they are on the rise in California.

Pavley wasn’t buying it, “Reportedly, The EPA finished a comprehensive mid-term review by mid-January, before Obama left office, and found that the automobile manufacturers were on track to meet the 2025 targets with cost-effective technologies. There is a big report. The automobile manufacturers saw an opportunity now that Trump is in office and Pruitt hates regulations and doesn’t believe in climate change. They insist on a new review and to not accept the EPA review just completed. If it’s a short term delay, that probably is OK – but the automobile manufactures are more profitable than they have been in 15 years, and producing cleaner, more fuel-efficient vehicles that clean up the air, reduce GHG’s and our dependence on foreign oil, and save motorists money at the pump. They want to slow down their progress because they make more money selling bigger cars. Look at their profit margin for the last five years. California has adopted policies at their request to helped them market their automobiles and be successful such as rebates, HOV lane access, spending money on electric car and fuel cell infrastructure, etc. We were partners in their efforts to make them financially and environmentally successful, and now they want to undo their commitment.”

“The goal of the automobile manufacturers is that they want to delay and reduce the 2025 targets for a variety of reasons. Primarily, any regulated entity wants more flexibility and ability for more profit, so with the Trump administration they see an opportunity(they “forgot” about the urgency to reduce emissions from fossil fuels) The automobile manufacturers fought any increase of the CAFE standards from the mid-1980’s until the 2012 national regs were formally adopted combining CAFE standards with the California vehicle GHG emission standards( after 5 years of lawsuits in 12 states that they lost in court). They now, with the new administration, are increasing the production of SUVs and larger vehicles because they make more money (profit) and since gas prices are still relatively low, people have one more reason to buy a larger car. The risk is, gas prices may/should go up, climate change and emissions are real, health impacts of vehicle emissions are real, and they need to compete in the global market with the need for cleaner, more fuel-efficient vehicles.”

“Under the 2009 agreement, the automobile manufacturers said they got what they wanted; a national standard for all 50 states and Canada. Our American made automobiles(Ford, GM, etc.) supported the fleet average agreement(i.e. if Ford sold a large pickup or SUV, they need to produce and sell electric or more fuel-efficient cars, too. Consumers just got a broader choice of vehicles) GM and Ford became competitive with Toyota, Honda, and others foreign automobile manufacturers in the U.S. and Internationally. Canada adopted California’s standards and the new U.S. standards. I am really disappointed with the automobile alliance. They can meet the 2025, 50mpg target, but now they see an opening not to use their amazing engineering skills to accomplish that objective.”

“The delay is not the only thing they want. The last thing they want is for California and the 12 other states that adopted our 2004 cleaner tailpipe standards(40% of the market) to continue to enforce their own state laws, under the Federal Clean Air Act waiver provision. We are back to the same argument from 2002; they don’t want two standards in the US. They always told me they want just one national standard. They now have it. We proved, for the motorists, with cost-effective new technologies, alternative fuels, etc., that the relatively small increase in the amount of the car, was offset within a few years by saving money at the pump. Even are larger passenger cars, SUV’s and Pick-ups are more fuel-efficient today.(i.e. 12-20 mpg) There will be attempts to prevent us from enforcing our own laws, or an attempt to take away California’s waiver provision under the Federal Clean Air Act.

Bergquist believes that “There are many areas that need clarification in EPA’s final determination to arrive at a credible conclusion. One noted issue is, In 2012, the government originally projected a fleet mix of 67 percent car and 33 percent truck. In last year’s rushed Mid Term Review, the technical report changed the forecast to only 52 percent car and 48 percent truck. It’s important for automakers – who are the ones who must meet these standards – to understand what factors went into shifting the fleet mix forecast.”

In fairness, Manufacturers can create a significant shift in the car-truck fleet mix by incentives, etc.

Pavley countered, “Gas prices have been rising in Southern California. $3.05-3.13 a gallon. One reason they are artificially low is the glut of oil by OPEC to keep US oil companies from fracking. Our gas prices fluctuate with the oil refineries closures for maintenance or other issues.”

“In California, our largest source of GHG emissions is from our automobiles. Don’t we all have a responsibility to address this urgent problem as well as related health impacts of dirtier air? We are thrilled with the progress of the automobile companies in investing, engineering and producing electric, plugins and fuel cell vehicles. I have gone to the LA Auto show the pass several years as their guest to see all the major foreign and domestic automobile manufacturers producing these new cleaner, fuel-efficient cars, not just for the US, but the global market. Delaying the review, because you politically can and want to make more money to recoup your investment in these new cleaner cars, seems wrong. Part of their investment is also in automation to cut back their workforce. The big question is does this stop with a minor delay and another review? Do we also factor in the cost of gasoline to motorists, the health care impacts, and the good faith infrastructure investment states like California are making?”

It will be an interesting meeting tomorrow in Michigan.