IHS Markit forecast that in 2026 there will be more than 130 models in the U.S. market that will offer electrified propulsion systems.

Stephanie Brinley, a principal automotive analyst at IHS Markit, reports that the number of E.V.s on offer to U.S. consumers is set to explode in the coming years, with E.V. investments. The impact of those investments on automakers’ financial results will be the subject of intense scrutiny. The IHS Markit sales-based powertrain forecast, for the U.S. market, shows several reasons automakers will invest in a zero-emissions future. One reason is the forecast of explosive growth in the number of electrified powertrain offerings in the U.S. between 2018 and 2026.

Automakers across the globe are making massive bets on the future of E.V.s. Perhaps the most aggressive moves in this segment will be from Volkswagen. Billions of dollars have already been invested in supporting what is expected to be a fundamental shift in propulsion systems. IHS Markit forecasts that E.V. sales in the U.S. market will grow to about 1.28 million units in 2026.

The number of E.V.s is forecast to increase to about 38 by 2020. Around 133 nameplates will offer an electric powertrain in the U.S., by 2026. Some of these nameplates will be existing entries, expanding to provide an E.V. option. As we are already seeing with Hyundai’s Kona and Ioniq and Kia’s Soul and Niro, some brands in the future will offer E.V., hybrid, and internal combustion engine solutions under one nameplate, increasing from 361 in 2018 to 400 in 2022 but then slipping to 390 in 2024.

Some of the new E.V.s to market will be the Mercedes-Benz EQC, and the Volkswagen I.D. 3 and the Rivian Utility Vehicles. 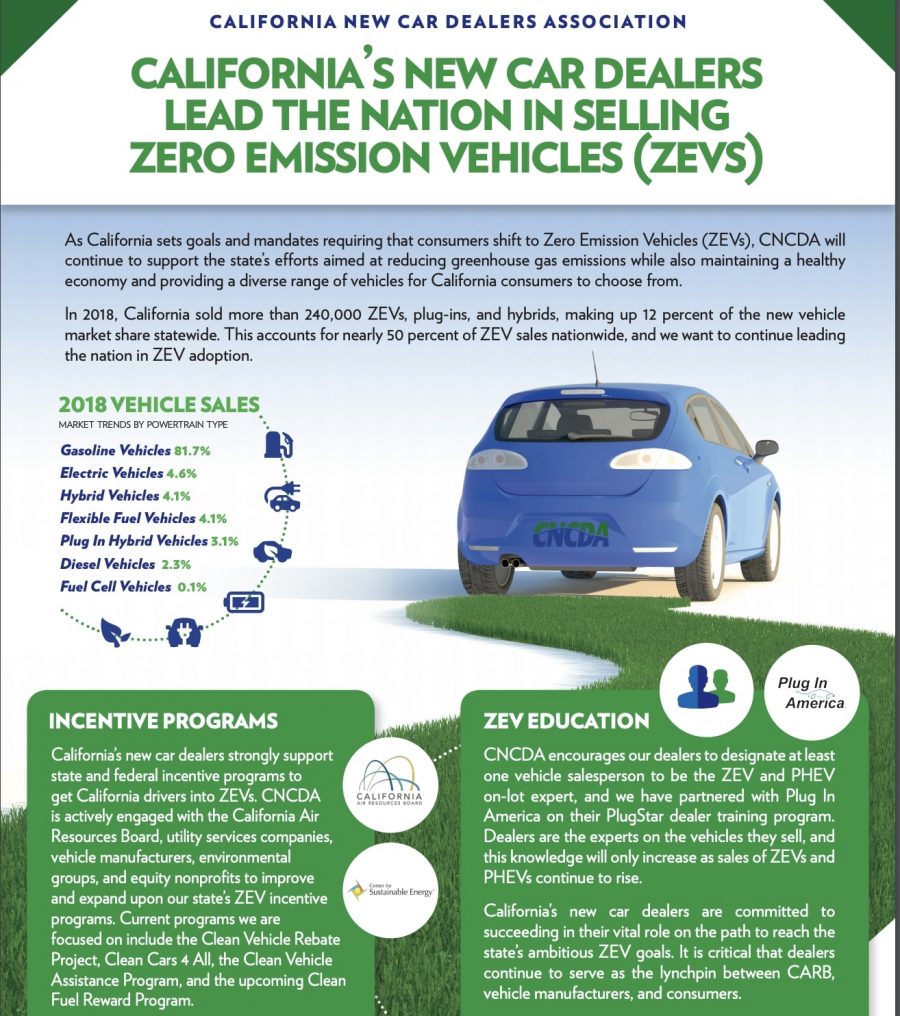 California’s New Car Dealers say that in 2018, California sold over 240,000 ZEVs, plug-ins, and hybrids, equating to 12 percent of the new vehicle market share statewide. This accounts for nearly 50 percent of ZEV sales nationwide. Vehicles with electrified powertrains accounted for 1.2% of the U.S. market in 2018, about double the share of 2017. The increase was almost solely due to the Tesla Model 3.

Just like the current market of utility vehicles versus sedans, there will more electric utility vehicles produced and the top 10 brands will claim nearly 890,000 units of the 1.28 million E.V. sales in 2026, leaving about 33 brands with a combined 392,000 units. IHS Markit says the increase in sales will be from the top ten brands and 33 other brands. The forecast for 2026 is 16.84 million sales with about 48 brands. While vehicle introductions are currently outpacing demand, E.V. competition will be extremely high in the future.

Compliance cars to satisfy emission requirements will shift to long-range vehicles and vehicles for specific uses; a shift which is needed for more widespread adoption.

In 2018, only eight E.V. options were available. The result of the flurry of OEM activity between now and 2025 will be E.V. options in 18 U.S. segments. Overall, the mix is expected to be similar to that for traditional powertrain vehicles, something necessary to grow E.V. sales.

How to make E.V.s more attractive

To make E.V.s attractive to more buyers, they must come in packages which fit with customers’ expectations. In 2026, IHS Markit is expecting SUV EV sales to grow to about 757,000 units in the U.S., nearly 60% of total E.V. sales. In early 2019, Rivian made a splash at the New York International Auto Show with a promising option, and G.M. and Ford have both committed to expanding the number of E.V.s across their respective ranges. Even with this expansion, IHS Markit’s latest forecast sees only about 32,000 units of E.V. pick-ups sold in the U.S. in 2026. By comparison, full-size SUVs, which have less extreme duty cycles than full-size pick-ups, are forecast to sell about 69,000 units in the U.S. in 2026.

Globally, automakers are making massive bets on the future of E.V.s, with Volkswagen (V.W.) perhaps making the most aggressive moves. The investment will support what is expected to be a fundamental shift in the decades to come, with the billions in investment earmarked so far only the beginning of the change. IHS Markit forecasts that E.V. sales in the U.S. market will grow to about 1.28 million units in 2026. In this near-term period, we can expect a highly competitive segment, with the new options on offer growing faster than demand.

Global factors will affect the growth of the E.V. market in the U.S. Several automakers have announced ambitious investments in E.V. markets, as well as aggressive sales targets. Much of the initial investment will support sales in Europe and China, and several automakers may prioritize those markets. European emissions regulations will introduce substantially more stringent rules, and the penalties for missing them will be much higher.

In China, government policies encourage production in the country, although there has been a somewhat inconsistent approach to incentivizing consumer behavior. The sheer size of the Chinese market makes the opportunity for economies of scale more significant in China. In the U.S., there is the possibility of emissions targets advancing less aggressively than once planned, and less aggressively than in Europe or China. The U.S. remains the second-largest market, and success in it remains essential to automakers.