If you were waffling on whether to attend the New York International Auto Show, waffle no more. Mazda Motor Corporation has unveiled, in a global debut, the Mazda MX-5 RF (retractable fastback). The latest addition to the MX-5 family fully embodies the model’s 26-year-old tradition of zoom-zoom. The Mazda MX-5 RF breaks the bounds of conventional thinking to create something entirely new, and fun to drive. 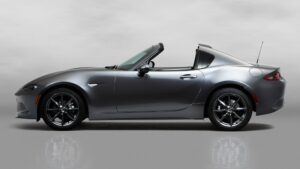 The MX-5 RF features fastback styling with a smooth roofline that slopes down to the rear end, and its unique rear roof and retractable back window offer a new open-air feeling. The power roof can be opened or closed at speeds of up to 6.2 miles per hour with the press of a button. Despite its fastback design and hardtop roof, the MX-5 RF is stowed compactly, while offering the same amount of trunk space as the soft-top model. 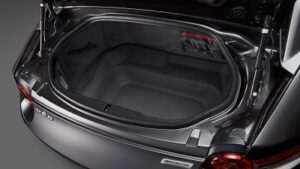