There were a couple of unanswered questions from last week, and I told you I would get back to you.

1. donating vs selling a clunker at what point does the value of a car get so low that the tax deduction from donating it becomes more valuable than selling it? $500? $100?

Talk to your accountant. If you need a charitable tax deduction to reduce the amount of cash you pay the government for your taxes then donate. Remember, your deductions need to be more than the standardized deductions, otherwise, it won’t count. If you can’t deduct it, sell it outright – that’s my motto.

2. Tesla 3? How can you recommend a car that doesn’t actually exist yet? Sure, if Tesla comes out with the Tesla 3 on time and on budget, with the specs that have been promised, then it might be a good car for the OP to look into. But right now it only exists in Elon Musk’s head.

I was talking about two different hypothetical vehicles; the Tesla 3 and the Volvo XC 90 PHEV. Neither has come out yet.

3. Car Structural Safety As a structural engineer who has worked in the auto industry, the term “strength” has a very specific meaning in engineering, but a general meaning to the public. If a car structure is designed with too much “strength”, it will be very stiff. The result will be that the energy of a collision gets transferred to the occupant, which is not a good thing. Think of the Dale Earnhart crash a few years back… stiff car meets stiff wall equals fatal crash. What manufacturers do is design a car that compromises between stiff (better handling, more robust) and compliance, where the structure deforms during a crash to absorb the energy. So the best way to gauge the crash-worthiness of a car structure is to use the crash ratings from the NHSTA. But, as Warren would say, the safest car is the car with the safest driver.

I always appreciate it when an expert gives us some sage wisdom. And yes, that is something I could hear Warren saying.

4. Jag XE Sat in the new Jaguar XE at the auto show. I thought it was a beautiful car. The interior felt quite cozy (and maybe a little cramped). I was impressed by how quiet it was inside the doors closed. You didn’t hear any of the outside noise. If only I had $50K I didn’t need…

This week I drove the new MINI Convertible around the hills of Los Angeles and the sunny oceanside Pacific Coast highway.

Today, after the chat, I will drive the BMW M2 at Laguna Seca Raceway, and the X4 M40i. I’ll be able to tell you more about what I think next week, but I can tell you the prices of the MINI convertible; 2016 MINI Convertible with a Manufacturer’s Suggested Retail Price (MSRP) of $25,950 for the Cooper model. 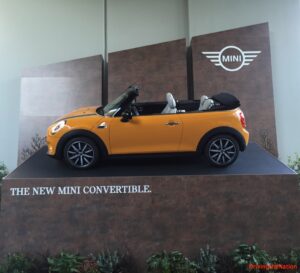