Experian always comes out with interesting in-depth statistics on car sales, registrations, and the car inventory on the roads of the United States of America.

The biggest news is that the Ford F-150 dropped from first place to third place in year-over-year registration from 1st Quarter 2019 to the first quarter of 2020. The Chevy Silverado takes first place, followed by the Toyota RAV4. While the GMC Sierra climbed, the Honda Accord and Jeep Cherokee dropped. 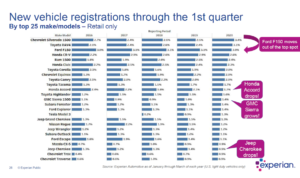 There are 279.,2 million vehicles on the roads of this great nation of ours in the first quarter of 2020. America started out with 276 million in the first quarter of 2019. Year-over-year 16.3 million new vehicles were registered while 13.1 million went out of operation, and 40.4 million used cars changed owners. Of the total new registrations (of new and used vehicles), the import brands garnered 55.7% of the new car registrations while the domestic brands garnered 52.8% of the used car registrations.

The vehicle year 2002 saw the most cars go out of service – pickups Vans and Crossovers are the stars of all vehicles in operation. Most of the VIOs were 4-cylinder and front-wheel-drive. Over the last eleven years, domestic vehicle sales have decreased; 57.1% of sales are domestic, and 42.9% are impFirst orted. In fact, General Motors continues to go down while all the major imports go up in marketshare with Cadillac and Buick not growing year-over-year.

Pickup marketshare increased to 15.9%, with the Ford F-150 coming in first, followed by the Chevy Silverado. But the big news is that there is an expectation that the CUV entry-level will move to #2 in market share next quarter, hedging out the mid-range car. There was a slight increase in the hybrid electric vehicle market share over the last quarter.

The average age of the US car market

The average age currently stands at 11.72 years of the 1967 and newer models on the road. If you look at just the last 25 years of average age, the age goes down to 10.62 years. The reason Experian makes this distinction is that vehicles over 25 years old are considered antiques and not used as daily drivers.

Cars out of warranty on the road 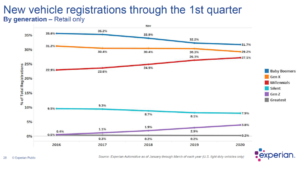 The recession versus COVID-19

In 2006 registrations peaked at 16.1 million and then went into a freefall ending up around 10.1 million around 29 months later. It took about five years to recover.

From 2016 on, the peak was around 17 million. After COVID-19 started, the registrations fell 32% in May 2020. Euro brands, then Asian, and lastly, Domestic brands have fallen the hardest.

There is a possibility of a quick rebound if we stay safe and get back to work quickly. But you can’t buy a car if you are dead or have no money, so staying healthy and getting back to work are the two most important jobs every American has right now. It’s a delicate balance.