Flying into the Future

Flying into the Future

July 29, 2005 – This week at Tinker Air Force Base, Oklahoma, the military tested the synfuel that could fly today’s planes tomorrow.

Synfuel, in this case, is synthetic aviation petroleum, made by the American company, Syntroleum. According to Jerry Hereden, Communications spokesperson for Syntroleum, the Department of Defense ordered 100,000 gallons of the fuel. From the Syntroleum website, “Our process also represents a solution to flaring. Because stranded natural gas is often associated with oil and production, producers typically flare this valuable asset to get to the crude, burning off as much as 10 billion cubic feet each day. The practice is not only wasteful, but it is also the target of worldwide environmental laws designed to reduce global warming.”

According to Hereden, Syntroleums synthetic fuel burns up to 90 percent cleaner than conventional jet fuel and can be made from coal or natural gas. Currently, Syntroleums fuel is being made from natural gas, a gas that used to be flared during the oil production process. In an effort to maximize the efficiencies of all fuels, to increase the supply of domestic aviation fuel, the Department of Defense created an Assured Fuel Initiative in 1999.

According to Michael A. Aimone, Assistant Deputy Chief of Staff for Logistics, Installations and Mission Support, Headquarters U.S. Air Force, Washington, D.C, the initiative was really spurred on by Hurricane Katrina and Hurricane Rita. “President Bush sent a letter to all agencies to conserve energy. We took this to heart and we became aware of the long-term issues. We are not focused on cheaper prices for gas, but price stability, regularity for our budget cycle, and for getting off the dependence of foreign oil. We started doing a detailed analysis of our airplanes, including the basic premise of the fuel loading; the theoretical, and the actuaries. And we started looking at homegrown fuels.”

Aimone went on to say that, “there was an executive order to decrease, by 30 percent, the use of energy by the military. That objective was met. Most people don’t know that the military’s consumption of energy is only 2 percent of the nation’s energy usage. Of that 2 percent, 50 percent of it is because of the United States Air 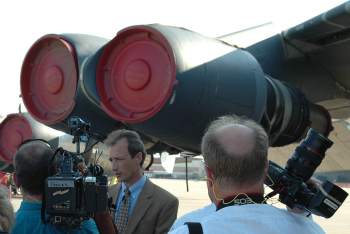 Force (USAF), with 80 percent of that coming from aviation fuel.”Syntroleums website says they have been testing and evaluating fuels and specialties products for more than six years in the pilot plant and demonstration facilities. For example, in one particular program, performance and emissions tests were conducted in Chrysler and Toyota motor vehicles. In these tests, Syntroleum liquid diesel delivered 72 MPG, a Daimler-Chrysler diesel-hybrid demonstration vehicle, and met advanced emissions standards and showed no perceptible reduction in power or performance.

Under an additional program – sponsored by the Department of Energy – Syntroleum produced up to 150,000 gallons of various grades of diesel fuel and 10,000 gallons of synthetic jet fuel. This fuel has been evaluated by several laboratories under DOE contracts. The Massachusetts Institute of Technology conducted an extensive emissions program over three years looking at the inherent benefits of synthetic paraffin diesel fuels in modern emissions-compliant engines. This work includes tuning the engine to perform optimally on synthetic diesel fuel. AVL Laboratories has conducted an extended duration durability test of Syntroleum using a DC bus engine and Caterpillar 2004 compliant engine. Both engines completed a 1500 hour test cycle with no problems. These were the engines that were part of the field demonstrations program where Syntroleum was tested in transit bus service in Washington DC and in National Park Service use in Denali NP. No fuel-related problems were observed.

The first test, the one that happened this week, according to Tinker’s spokesperson, was a test of the synthetic fuel in a jet engine. The synfuel, according to, was combined with regular jet fuel and tested in a stationary B-52 engine for fuel emissions and performance qualities.

According to Ron Mullan, Chief of external media operations for Oklahoma city air logistics center, the first experiment established a baseline with JP8 fuel and the next experiment, in the same engine, was both JP8 and synfuel. Afterward, Tinker’s engineers conducted a 50-hour endurance run on the blended fuel. The results have not come back yet. The engineers are still gathering, compiling, and analyzing data for presentation to the Air Force Research Laboratory (AFRL). Tinker’s engineers are the program 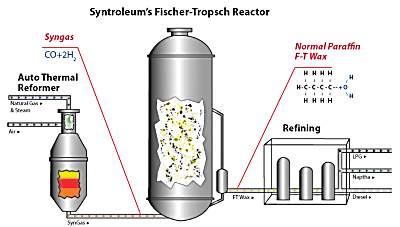 managers for B-52. The B-52 was selected because of the safety, particular fuel system on the B-52, and the eight TF33 engines themselves. Fuel storage on the B-52 can be kept separate and be fed at will to each engine. This allows the experiment to use synfuel in only two engines and can be shut down if they don’t work satisfactorily.”We believe that successful testing of our fuel potentially could lead to long-term off-take agreements with the military as they seek products with high specifications that are environmentally friendly,” said Jon Warzel, Syntroleums vice president of business development and government programs. “We believe the fuel testing program by the military will validate our technology and the ability to meet the military’s supply needs.”

Tuesday’s tests represent the Air Forces third round of experiments using the synthetic blend created by the Tulsa, Oklahoma group. There are domestically hydrocarbon products available and plentiful, like natural gas, coal, and shale, in the United States. These hydrocarbons can be created into a diesel-like fuel, using the Fischer-Tropsch process, which was developed in Germany in the early 1920s. The cost of a barrel of gasoline has increased so much that synfuels are at their breakeven point for production.

According to Aimone, the summer season was specifically set as the time to test the syngas created from natural gas, “natural gas is great for heating homes in the wintertime and we believe that is what natural gas should be used for. It is a great provider of knowledge for syngas now, but in the long-term, the military will want to use syngas provided from a broad-based initiative such as coal-to-liquids (CTL), and oil shale.”

On Nov. 29, 2005, Syntroleum Corporation (Nasdaq:SYNM) announced that it had signed an agreement to conduct a laboratory-scale demonstration of Syntroleums Fischer-Tropsch (FT) catalyst with coal-derived syngas (CTL) produced at an established gasification facility in the United States.

Aimone said the preliminary test had received a good thumbs up, but there were still reams of data to go through. Assuming all else looks good the military will start phase four; a test flight using this synfuel in two of the six engines in a B-52 is scheduled for this fall at Edwards Air Force Base, California. 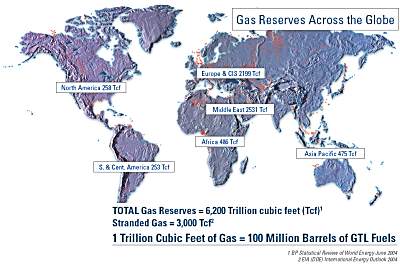