Tesla has been the darling of Wall Street since its inception, with venture capitalists and wealthy people plunking down thousands of dollars to be on the cutting edge of technology that they say is the fuel of the future. Ford says it is ready to merge onto that highway, by announcing an all-electric vehicle by 2020, new safety technology and a hybrid for every model.

There have been rumors for quite some time that Ford is the company to watch, that they have more “pieces” of the electric pie than other car companies. The reason it has taken so long, a friend inside the SAE, a group of automotive engineers, confided to me was because of the wide breadth of technology that Ford has purchased, partnered, or produced.

Jim Farley, President of Ford Global Markets, speaking at a press event, called the future EV SUV a low-slung Mustang. What Ford is hoping is that the EV SUV will do for Ford what the Model 3 has done for Tesla with the functionality of an SUV. Ford is ready to capture some of that passion for the blue oval.

Ford announced that every single model Ford produces would have a hybrid variant of that model by 2020, producing six electric vehicles and investing $11 billion. The automaker said that SUVs are driving Ford Performance sales, which are on track to grow another 71% by 2020. Ford says it will replace 75 percent of its lineup and add four new nameplates.

Ford F-Series, a company unto itself, is adding a diesel F-150 and hybrid.

Jim Farley, head of global markets, but the magnitude of the F-Series pickups in perspective, saying that the F-Series are a $41 billion business, bigger than Coke or Nike. It makes perfect sense for the automaker to capitalize further on that business by adding an F-150 diesel to the line-up, coming this spring that Ford promises to be best-in-class horsepower, torque, and obtain 30 mpg on the highway. In 2020 expect an F-150 hybrid with a mobile generator, and an all-new Super Duty by 2020.

A new Ranger midsize pickup goes on sale next year in the U.S.; The Ford executive’s voices rang with excitement when they told us to expect more news about a Raptor. Farley described off-roading in a Raptor as different than an off-roading Jeep, rather dirt trails, lifestyle adventures, and on-road performance. 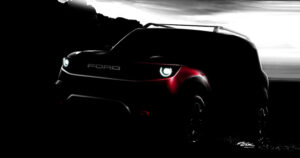 An Escape by any other name ~ the next-generation Escape will include a hybrid, as well as an all-new Escape-sized off-road SUV. Perhaps just naming it Escape rugged will do the trick, but whatever they name it this segment is hot, and the SUV will be popular in any variant.

The performance ST version will still be front and center in Ford’s quest for greatness. Expect a couple more ST versions including the Explore ST. 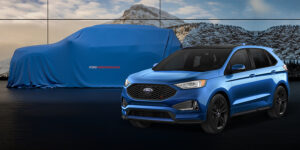 For no other selfish reason, than to continue to see Matthew McConaughey, I hope that Lincoln gets it right. It was sly, but there was a quick word – Aviator – that went across the screen. I mentioned it to Farley, and he smiled and slyly said, so you saw that. Expect to see the Aviator at the New York Auto Show, and more SUVs after that. I mean, really, we have to find out what that notebook is about that McConaughey has in his hands. I would assume that Lincoln will have a hybrid or plug-in hybrid for each SUV as well, which will help with the big 3-row Navigator.

Okay my friends, just like with Tesla, Co-Pilot doesn’t mean you can take your hands off the wheel and gorge on a burger while watching a movie. A standard suite of driver-assisted technologies called Ford Co-Pilot360 will make features such as emergency braking with pedestrian detection and blind-spot warning standard on virtually all vehicles in the future. Back-up cameras are required on all vehicles as of 2018. You will see the Co-Pilot360 on the updated Fusion first, then on the new passenger cars, SUVs and trucks all the way up to F-150 in North America going forward.

In 2010, Ford was hiring more software engineers than any other car company. They created more safety software such as Curve Control (CC), a software program that uses all the other programs on the vehicle to sense when a driver is losing control in a curve. That was 2010.

The next three years will be the most telling time for Ford. If they do what they have shown us at this event, they will make in-roads into states such as California, states that have been demanding the very vehicles that they are saying they will bring to market. Bring it on Ford. 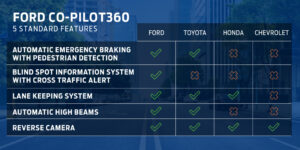