From CA to CA over Thanksgiving carchat

From CA to CA – from California to Canada.

I am at the Westin Harbour in Toronto Canada covering the Natural Ultimate Fitness Event. I am trying to get healthy, and while I don’t want to be as assiduous as the contestants, I like the idea of working out, no alcohol, and no sugar. Especially, right before the Holidays.

I drove a pre-production Chevy Bolt. I love the technology in the car! If 33.7 kWh is equal to a gallon of gasoline, we got 128 mpge! The drivability of the vehicle is phenomenal. I never felt a lack of torque.

I went from there to the first virtual reality unveil ever. The Jaguar I-Pace all-electric concept. Such a cool idea for an unveiling, and a beautiful Ian Callum design. I also got to see the new LandRover Discovery that will replace the LR4. 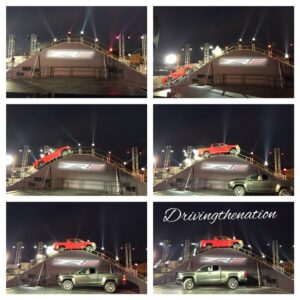 From there Stretch and I went to the Los Angeles auto show, now called AutomobilityLA. The pre-show party was with Chevy showing us the new Chevy Colorado ZR2. I went through the trenches and up the concrete jungle in that truck. Even though I cussed in the video, the car was as smooth and sturdy as one could ask for in a mid-size truck.

Most of the videos we did were done live on Driving the Nation Facebook, so if you want to see interviews about intelligent mobility, connected cars, the Honda hydrogen clarity, the Nissan Rogue Star Wars edition, a Honda Civic Si Prototype go to my facebook or youtube channel.

The North American Car, Utility, and Truck of the Year shortlist came out this week. They are;

The finalists for Car of the Year are:
* Chevrolet Bolt
* Genesis G90
* Volvo S90

The finalists for SUV – Utility Vehicle of the Year are:
* Chrysler Pacifica
* Jaguar F-Pace
* Mazda CX-9

The finalists for Truck of the Year are:
* Ford F-series Super Duty
* Honda Ridgeline
* Nissan Titan

How was your Thanksgiving? Mine was fantastic. I didn’t cook! I went to Tiki and Dave’s house with two pies and a bottle of wine, and the eight of us had a great time.

I drove the GMC Acadia. I loved the Acadia, but I didn’t like the bell going off when I turned the car off reminding me to look in the rear seat. It would be useful if some weight were in the back seat, but there was nothing in the seat. GM could program those seats to sense weight in them; just like they program the front seats if you don’t have your seatbelt on then, the bell starts dinging till you put on the seatbelt. Another bell going off that I eventually ignore is not a good thing.

Which would you choose in each segment? 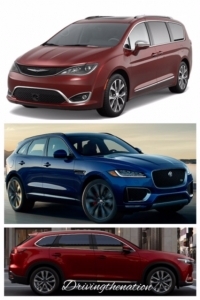