Russia and Ukraine are starting to seep into the Geneva Motor show discussions, and there is concern about what will happen if this situation is not contained soon if cooler heads do not prevail. European, American, and Asian carmakers are closely monitoring the “situation” in Ukraine. 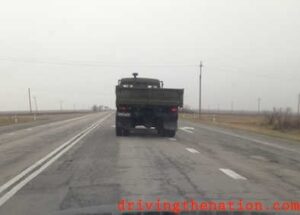 An unmarked military truck in Crimea

According to the Association of European Business (AEB), in 2013 there were fewer than a quarter million cars registered in Ukraine, but there were 2.7 million cars sold in Russia in 2013.

Fiat Chrysler Automobiles (FCA) President, Sergio Marchionne was asked how the crisis in Ukraine would affect the car business, “There’s not a doubt in my mind that if the situation in Russia and Ukraine remains as tight as it is, or if it worsens, that it will dampen demand in Western Europe. We have seen this historically. I don’t think Western Europe is exempt from the consequence. My sincere hope is that, as it is for most people around the world, that somehow the political leadership involved in this will have the wisdom to resolve it and take it off the table.”

The French manufacturer Renault purchased Lada, a Russian brand that is number one in the market. The Renault group was down year-over-year, but still held almost 30% of the marketshare. The Volkswagen Group holds 10.8% of Russia’s marketshare, General Motors comes in at 9.3% in 2013, Toyota 6.1%, and Ford comes in at 3.8%. To some manufacturers, staying profitable, creating more marketshare, is dependent on the emerging, expanding countries, such as Russia and Ukraine.

Volkswagen began building vehicles for the Russian market in Kaluga back in November 2007. The plant currently produces three models “ the Volkswagen Tiguan and Polo and the Å KODA Fabia. Also, the Group began manufacturing under contract at the Nizhny Novgorod plant of its partner GAZ at the end of 2012. Local component production will commence in 2015 when a new engine plant in Kaluga is commissioned. Furthermore, the Group is planning to open a logistics center near Moscow.

Volkswagen Group-Rus combines the operations of seven of the Group’s brands in the Russian market – Volkswagen Passenger Cars, Audi, SKODA, SEAT, Volkswagen Commercial Vehicles, Bentley, and Lamborghini. Sales in Russia in 2012 grew 38 percent year-on-year to 316,000 vehicles, of which some 175,000 were built at the Kaluga plant.

Ford Motor Company made up 3.8% of Russia’s marketshare in 2013. Liza Novikova, Vice President, Communications and Public Affairs, Ford Sollers Holding, the joint venture with Ford Europe, said that Ford & Sollers had three production plants and they were building an engine plane. Annual sales volumes around 107,000 units. Novikova said that SUVs were huge in Russia, “just like the United States, we have a lot of open space, a lot of land. Ford tripled sales in SUVs from 2012 to 2013.”

BMW’s Hendrik von Kuenheim, Sales and Marketing BMW, Senior Vice President Region Asia, Pacific and South Africa (which includes Russia) said, “The Russian market has been very dynamic. Last year we sold around 42,000 cars. We sell more cars in Russia than we do in Italy or France. Russia, like China, Thailand, and Korea, Japan Malaysia is a double-digit increase for BMW. The luxury segment has a disproportionate increase in sales. Fundamentally, car markets are healthy again.”

von Kuenheim said that he thinks the interest rate increase by Putin is a short-term activity, but that the BMW buyers are more cash buyers, but the traditional lease does not apply in Russia, “there is a balloon payment at the end of the lease.”

There were Germans I talked to that were concerned on a personal level. I was told that about one-third of Germany’s gas comes from Russia. The nuclear plants have been shut down because of Fukushima. There is concern about what would happen, how much gas will cost if the Russian stock continues to go down. Putin will have to find a way to pay his debts, not just by increasing the finance rate, but by raising the price of gas. 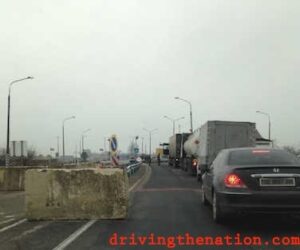 I talked to a Russian woman, and she was distressed because “we Russians don’t want to go to war” and she has already seen the price of gasoline go up because the value of the ruble has gone down. If President Vladimir Putin’s military forces continue to inhabit neighboring Crimea, Ukraine there is more uncertainty, and she fears there will be more people taking money out of the bank.

General Motors Group made up 9.3% of Russia’s marketshare in 2013. Dan Amman, President of General Motors Company, said in an interview that General Motors has a sizable manufacturing and sales operation in Russia. GM sells and produces models under the Opel and Chevrolet brands.

Toyota Group made up 6.1% of Russia’s marketshare in 2013 The Highlander is manufactured in the United States and exported to Russia. The Toyota Camry is produced in St. Petersburg, Russia at the Toyota Motor Manufacturing Russia (TMMR). Mike Michels, Vice President, Corporate Communications at Toyota Motor Sales, USA INC., said he doesn’t think there is any company debt that would be affected by Bank Rossii’s 1.5% increase in finances, but 40% of Toyota’s customers finance their cars, and it will cost them more money per month to finance.

There is concern about the devaluation of the ruble because this reduces profit for the importers. 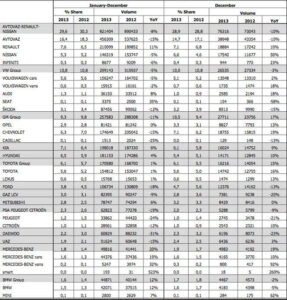