Carlos Ghosn went down a rabbit hole the minute the Ni55an jet landed in Japan. He was jailed on November 19, 2018, and the nightmare for him has not let up. Ghosn has been in detention for three months. He has been indicted three times, has been refused bail a couple of times, and stripped of all his titles and income from Nissan-Renault.

Japan’s legal system has a 99 percent conviction rate, but the way Japan goes about achieving that rate leaves the West baffled. In the United States, one is allowed to be held for forty-eight hours without indictment. With over three months rotting away in what is loosely called a jail, Americans are starting to take notice, and wondering if this is a conspiracy or covert actions on Ghosn’s part.

A vote of no-confidence by Renault

Reuters reported that on Wednesday, Feb 13 Renault took away another compensation, “The board unanimously decided, at its meeting of 13th February 2019, to waive Mr. Ghosn’s non-compete commitment and, consequently, not to pay the corresponding compensation equal to two years fixed and variable compensation,” the company said. Two years’ pay would be somewhere around $30 million.

It’s not too much of a stretch for Renault to be pretty confident that they won’t need Ghosn to sign a non-compete. A colleague of Ghosn’s said that IF Ghosn gets out of jail, they can’t think of a single company that would hire him. Another person said maybe some obscure company would hire him on its board, but that’s about it. Assuming he gets out of jail and out of Japan.

Amazon electrifying Rivian – will General Motors be next?

At the 2018 Los Angeles auto show Rivian debuted the all-electric R1T pickup and R1S SUV at LA Auto Show last November. The company’s launch products, the R1T and R1S, deliver up to 400+ miles of range. Rivian
has announced an equity investment round of $700M led by Amazon.

“This investment is an important milestone for Rivian and the shift to sustainable mobility,” said RJ Scaringe, Rivian Founder, and CEO. “Beyond simply eliminating compromises that exist around performance, capability, and efficiency, we are working to drive innovation across the entire customer experience. Delivering on this vision requires the right partners, and we are excited to have Amazon with us on our journey to create products, technology, and experiences that reset expectations of what is possible.”

“We’re inspired by Rivian’s vision for the future of electric transportation,” said Jeff Wilke, Amazon CEO Worldwide Consumer. “RJ has built an impressive organization, with a product portfolio and technology to match. We’re thrilled to invest in such an innovative company.” 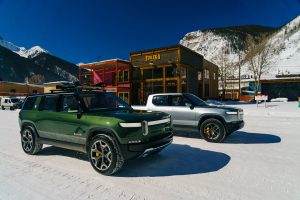 Rivian will remain an independent company. The vehicles use the company’s flexible skateboard platform and will be produced at Rivian’s manufacturing plant in Normal, Ill., with customer deliveries expected to start in late 2020.

Can Tesla make a Model 3 that has a 500-mile driving range?

It was a simple press release that went out on February 4, 2019, “Maxwell Technologies, Inc. (Nasdaq: MXWL or the “Company” or “Maxwell”), a leading developer and manufacturer of energy solutions, today announced it has entered into a definitive agreement (the “Merger Agreement”) to be acquired by Tesla, Inc. (Nasdaq: TSLA or “Tesla”). Tesla will commence an all-stock exchange offer for all the issued and outstanding shares of the Company (the “Offer”), after which the Company will be merged with a Tesla subsidiary and become a wholly-owned subsidiary of Tesla.”

But Electrek’s article hypothesizes that Tesla’s acquisition of Maxwell may have more to do with the dry battery electrodes (DBE) for lithium-ion batteries which the company calls “a breakthrough technology that can be applied to the manufacturing of batteries.” Specifically, batteries that go in electric cars will give a driving range somewhere around 500 miles on a charge. If not a higher driving range it could be less expensive, with better durability.

The devil is in the details of the press release, “Maxwell is a global leader in the development and manufacture of innovative, cost-effective energy and power delivery solutions. We have developed and transformed our patented, proprietary, and fundamental dry electrode manufacturing technology that we have historically used to make ultracapacitors to create a breakthrough technology that can be applied to the manufacturing of batteries.”

Don’t forget, however, that Elon Musk likes the idea of energy storage and that is the other technology that Maxwell has been working on, ultracapacitors. What I didn’t see is Tesla’s battery-producing partner, Panasonic, in this equation. Hmmm….

If the forecast were correct for electric vehicles there would need to be more gigfactories opened, instead what Maxwell is saying is that the problem is that energy needs to double and the cost needs to reduce by half. Not only is space taken up by transforming wet electrodes to dry electrodes, but there are also environmentally harmful solvents involved in producing wet electrodes.

A Holy Grail for electric vehicles would be a 500-mile driving range, a reduction in cost, and for the battery to be cobalt-free. Could all this happen with the acquisition of Maxwell Technologies? Some think so. One of the biggest gripes about Battery Electric Vehicles (BEVs)s is the reduction in driving miles in hot and cold temperatures. DBE is said to solve that issue.

Stay tuned for the next couple of years. If the technologies Maxwell has been working on are more than a proof of concept you will see them come out in Tesla cars.