Hurricane Harvey and the water continues to rise

As I watch the devastation of Hurrican Harvey on television I see people in the streets; they are wading through water that is up to their waist. These are grown men at least six feet tall, helping other people out of the water.

And the water continues to rise- Louisiana lesson learned

I lived this nightmare with a friend and colleague of mine, Steve Wheeler, through his Dry Pillow Diary, a blog he started on his Facebook page after the Louisiana storm hit his little town, a year ago. Wheeler is a different man because of that storm; he had lost most of his furniture, his house had to be taken down to the studs because of water damage, and he had to rebuild most of it himself. He had to do most of it himself because many of his friends and all of his neighbors were all in the same boat.

It was an unnamed storm that stalled over Louisiana similar to Harvey over Houston. The storm dumped 31 inches in 3 days and is known as the “Great Louisiana Flood of 2016.” There were 150,000 homes flooded in Louisiana, 95 percent of the 12,000 homes in Denham Springs, Wheeler’s town, was flooded. They will feel some of the effects of Hurricane Harvey today.

The storm has defined Wheeler’s life; when he thinks of a purchase now, he thinks of that storm. I see cars stranded, and the television announcer on CNN is saying that only the trucks can get through, anything with a high enough clearance that can’t be flooded can move through the water. I think to myself; if I were in this part of Texas, I would only buy a truck with high ground clearance.

And the water continues to rise – businesses are in trouble too 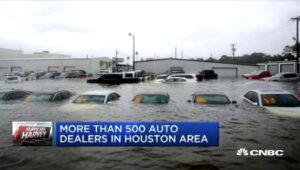 Over 17,000 people are in shelters across Texas, and Hurricane Harvey is forecasted to make a second landfall tomorrow morning, hitting Louisiana this time.

The people that have left their homes in their cars are taking what they could get in the car and get out of danger. People are not thinking about buying cars. Even if they were, CNBC’s Phil LeBeau reported that Hurricane Harvey has impacted more than 500 car dealers in the area. Even the car dealers that thought they were moving their vehicles out of harm’s way to the higher ground have found the safe haven wasn’t high enough. Lebeau said that we should not be surprised if over a million cars are washed out of the system, given salvage titles.

Lebeau gave a couple of auto stocks to watch; Autonation with eighteen stores in the area, Houston headquartered Group One has about 37% of its sales in Texas, Kansas City Southern, the main railway between Texas and Mexico for importing cars.

Automotive News reported that “Nineteen of Sonic’s dealerships, which employ 1,500 to 2,000 people, stood in Harvey’s path.”

Another company to watch will be Carfax; a company that can give you the history of a car you are thinking about buying, and whether that car has a salvage title and shouldn’t be purchased.

There are enough new vehicles on lots that the industry doesn’t have to worry about providing more vehicles in Texas, they just have to wait for the rain to stop and the water to reside before they can bring them to Houston.

And the water continues to rise – car sales

Buying a new truck would be easy, and many people will need to do that. The question is, where is the money going to come from once the rain stops?

There were people on TV that said they couldn’t leave Houston because they didn’t have the money. And they are stranded now and in need of help.

In March 2017 Marketwatch wrote, “More than seven years after the Great Recession officially ended, there is yet more depressing research that at least half of Americans are vulnerable to financial disaster.”

NBC reported that only two in 10 homeowners in Houston opted for flood insurance on their policy. Anecdotally, FEMA will pay people around $15,000 to fix their homes. That’s nothing when you’re out of work for weeks because your business is in the same catastrophe as you are, your home is waterlogged, you have no electricity, and the garbage isn’t being picked up.

And the water continues to rise – Oil and gasoline

Just like car sales, there is a lull in the demand for gasoline in the energy hub of Houston. Once America’s fourth-largest city gets back on its feet, it will need that gasoline, and we may see the price of gasoline spike.

Fifteen percent of oil refinery capacity is in the Texas Gulf region. As of Sunday, 22% of the oil production and 25.7% of the natural gas production in the Gulf of Mexico are shut-in as a precaution, and most refineries were shut down.

Shell Deer Park refinery has been shut, there is no timeline for restart. This is one of several manufacturing facilities along Houston Ship Channel shut due to heavy flooding.
All our Louisiana facilities are operating normally and preparing for a heavy rain event with TS Harvey now headed there. No issues to report as of now.
Shell office facilities in the Houston area are closed until 9/5 and employees are encouraged to work from home as possible
Shell has 20,000 US employees, nearly half have been impacted in some way by Hurricane/TSHarvey.
Shell has made an initial $1 million donation to the Red Cross for Harvey relief
Regarding Pipelines:

The situation is continuing to evolve, and we are constantly accessing the impact of Tropical Storm Harvey.

The Zydeco Pipeline 20” was shut down Sunday, August 27th due to flooding at connecting carrier facilities.  This segment of the line will remain down until field operations can assess the facilities and right-of-way.  The Zydeco 22” from Port Neches to Houma is currently operating.

The Colex products terminal in Pasadena is operational. The Sinco Pipeline System is temporarily shut in and is expected to be operational later this week after a site assessment is performed.

Regarding offshore operations:
A crew landed on our Perdido platform yesterday (8/29) to perform a preliminary inspection and systems check. The feedback from the initial inspection was very positive with no material physical damage observed. We are taking a phased approach to ramp up with no timeline yet to bring the facility back online.  A number of process and systems checks are still to come – the outcome of which will determine when it’s safe to resume operations.

This is not a situation that most people can prepare for, even though they are handling it as well as can be expected.

Cajun Navy 2016 is a Louisiana-based army of volunteer rescuers from Baton Rouge that drove in trucks, with boats that can skim the bayous that were once highways. They are helping their neighbors in Houston. They are volunteers that know what it feels like to need someone, and they will be there.

Donating money, blood, food, animal food, a room, and clothing are some of the ways you can help the victims of Hurricane Harvey.

And the water continues to rise