Hurricane Katrina – the key to recovery

On August 31, the Environmental Protection Agency (EPA) issued a nationwide emergency fuel waiver to increase the supply of gasoline and minimize potential gas supply disruptions caused by Hurricane Katrina. Effective immediately, EPA waived the requirement to sell “summer gasoline” which contains a lower volatility limit. This action has the effect of allowing early use of wintertime gasoline. EPA is also approving the use of diesel fuel which exceeds 500 ppm sulfur content. Both waivers will continue through September 15th,2005, and are applicable throughout all 50 states, U.S. territories, and the District of Columbia.

The move gives the oil refineries the right to sell what they’ve got without concern over emissions. The EPAs justification is that the waiver is only for two weeks, and the first two weeks are critical in the recovery process of Hurricane Katrina. EPA thinks the emissions action will be minimal if any. According to John Millet, EPA spokesperson, “The Gulf area has over 1,000,000 people without power for a period of time. We think the power plants that are down will offset the emissions that will be occurred with the two-week waiver, the same as what happened in the Northeast blackout a few years ago.”

According to JD Powers Power Information Network (PIN), gas accounts for 92.2 percent of transportation fuel, diesel 3.1 percent, hybrid 1.3 percent, and flexible fuel 3.4 percent. The biggest part of the flexible fuel number is ethanol. Reid Vapor Pressure (RVP) is a measure of the volatility of gas and can be reduced by adding high-octane components such as ethanol. There are at least fourteen boutique blends in the United States. Each of those has a varying degree of ethanol in them. Does this waiver mean that ethanol demand will decrease? NO, it has increased.

Ethanol is a homegrown fuel, mainly produced from corn. Ethanol has a high octane level, so it is used as an oxygenate that helps cut emissions. For every 1.5 mpg, gas gives you, ethanol gives you one mpg, so while it is not as energy-dense, it can propel your car. Industry analysts speculate that the carbon dioxide it creates in an automobile is negated by the carbon dioxide it consumes when it is growing as corn. There has been a push by environmentalists to require 10 percent ethanol in all gas for two reasons;

* less dependence on foreign oil
* another revenue stream for farmers

The oil companies have fought it saying that gas is cleaner and has better mpg. Now, in the wake of Hurricane Katrina, they are calling for as much ethanol as they can get their hands on and ethanol is in short supply.

According to Robert White, Project Director, National Ethanol Vehicle Coalition, in June 2005 production of ethanol was at 249 million gallons per day (mg/day), while the demand was at 277 mg/day. There was only a 24-day reserve of ethanol. That was back in June when the oil companies were fighting against putting ethanol in their gas. The Thursday before Hurricane Katrina hit the wholesale price of ethanol was $2.32 a gallon (gas was $2.07).

The Thursday after Hurricane Katrina wholesale ethanol was $2.6 per gallon (gas was $2.62). However, most ethanol isn’t transported by pipeline. Ethanol is hygroscopic (absorbs moisture from the air) and easily picks up the water, especially in winter months, from ambient air and the distribution system. Therefore, ethanol is blended at the last minute, at tank farms, which is close to refineries.

According to the Oil and Gas Journal, the United States had 21.9 billion barrels of proved oil reserves as of January 1, 2005, eleventh highest in the world. These reserves are concentrated overwhelmingly (over 80%) in four states. As of December 31, 2003, Texas had 22% of total US oil reserves, Louisiana had 22%, Alaska 20%, and California 18% (note: all of these figures include onshore plus Federal and state offshore reserves).

The numbers are changing hourly, but what Driving the Nation has been able to gather from Oil and Gas Journal, Energy Assurance and the Energy Information Administration (EIA) is that there are seventeen refinery plants in Louisiana alone, refining over 2.7 billion barrels of oil a day (bbl/day) before Hurricane Katrina. As of 10 am September 2, 2005, eleven of the refineries were shut down, with four of them with NO power. Three of the refineries have reduced runs, and one refinery was supposed to restart sometime today. One state that generally refines over 2.7 bbl/day is now only refining a little over 200,000 a day. The next step after refining is piping the product. 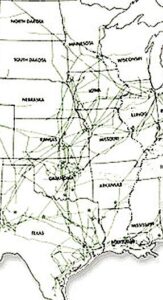 According to Colonial Pipeline Company (CPC), Colonial Pipeline consists of 5,519 miles of pipeline. The 5519-mile Colonial system transports fuels from Texas, Louisiana, Mississippi, and Alabama to 267 marketing terminals located near the major population centers of the Southeast and Eastern Seaboard. The pipeline runs north to Linden, N.J., ending at the New York harbor. According to the CPC spokesperson, the pipeline has just hit 70 percent flow and is expected to reach 86 percent by this weekend. The line was full when it went down, so deliveries were possible within hours “ not days “ of a restart. Once the line is empty, there will be very little refined gas coming out of Louisiana and Mississippi because of the downed refineries.

The paradox in this is that usually, the oil demand goes up, and then the price of gas goes up. Currently, the demand for oil is not there because we cant refine the oil. But the price of gas has still gone up because we are still demanding as much refined gas as we ever were.