In 2005 and 2007 whiz kid Chris Urmson was involved in the Darpa autonomous challenge with the Carnegie Mellon University, first as a student, next as a faculty member. The most significant challenger was Stanford University, led by Sebastian Thrun.

Urmson has gone from science projects, such as the gravitational pull of a ball-bearing, to working on some of the most progressive robotic vehicles, always on the forefront of technology. I have followed him through his career, interviewing him and his Father since 2005. It wasn’t hard to see that he would be one of the names of our time, and he has proven that correct, even though he didn’t want to admit it in 2007.

When Google first launched a secret project to build self-driving cars, it hired a core team of 15 engineers, including Urmson, led by Sebastian Thrun. Thrun left the Google group in 2013, Urmson took over the project as a lead. Carnegie’s Urmson became Chief technology officer of Google Autos, now called Waymo (What are you made of) and was with the project since it began until 2016.

Around 2005 a Stanford graduate in engineering, John Krafcik, started working at Hyundai. In December 2016, Waymo was founded, and Krafcik became CEO of the company. In Urmson’s farewell letter to Google he said, “If I can find another project that turns into an obsession and becomes something more, I will consider myself twice lucky.”

Chief Executive Officer (CEO) Chris Urmson has teamed with two other crazy smart men; former head of Tesla’s semi-autonomous Autopilot program, Chief Product Officer (CPO) Sterling Anderson and Chief Technical Officer (CTO) Drew Bagnell, who helped launch Uber’s efforts in autonomy, to create Aurora Innovation. The young lad that was a bit embarrassed when he was called one of the brilliant leaders is taking ownership of the title now, touting on the website, “Founded by three of the world’s leaders in the self-driving vehicle industry, we design the software and hardware that will power the next revolution in transportation. We bring partners together to move more quickly than anyone company can move alone.”

Hyundai Motor and Volkswagen have both announced a collaboration with the self-driving technology company, Aurora Innovation ahead of the 2018 Consumer Electronics Show (CES) in Las Vegas, Nevada.

Hyundai will partner with Aurora to develop Level 4 Autonomous Vehicles by 2021. There will be custom-developed Hyundai models that will incorporate Aurora’s self-driving technology and launched in test programs and pilot cities. Over the longer term, Hyundai and Aurora will work to commercialize self-driving vehicles worldwide.

In 2005, a Volkswagen Electronics Research Lab (ERL)-Stanford University team claimed victory with their car, Stanley. The 2005 DARPA Grand Challenge is widely considered the beginning of the automated vehicle era. 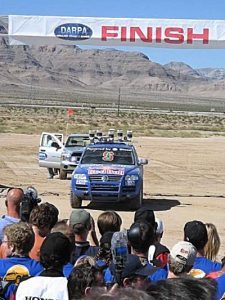 Volkswagen Group Chief Digital Officer Johann Jungwirth: “Our vision is Mobility for all, at the push of a button. This statement means that we want to offer mobility for all people around the world. Mobility for children, the elderly, sick, and visually impaired people, really for all. At the push of a button stands for simplicity and ease of use. In the future, we anticipate that people will be able to use our mobility app or digital virtual assistant to hail a self-driving electric vehicle to drive them conveniently door-to-door or to use our Volkswagen OneButton which has GPS, connectivity and a compass, as a small beautiful key fob with maximum convenience.

Working with Aurora Innovation, a leading self-driving system company will give us a giant leap forward in our mission to become the world’s leading provider of sustainable mobility, with self-driving vehicles. We aim to create new Mobility-as-a-Service (MaaS) solutions that customers will be passionate about because they have been tailored to the human with the highest safety standards, best-in-class user experience, and digital intelligence. For me, this is the reinvention of mobility and the automobile.”

“We know the future of transportation is autonomous, and autonomous driving technology needs to be proven in the real-world to accelerate deployment in a safe and scalable manner,” said Dr. Woong Chul Yang, Vice Chairman of Hyundai Motor. “Combining our advanced vehicle technology that embeds the latest safety features with Aurora’s leading suite of Level 4 autonomous technology will advance this revolution in mobility with Hyundai in a leadership position.”

“Aurora is excited to partner with Hyundai Motor to make the social benefits of self-driving available globally,” said Dr. Chris Urmson, CEO of Aurora. “This partnership combines Hyundai’s strengths in vehicle design, safety, and manufacturing with Aurora’s expertise in self-driving technologies to make a positive difference in the world.”

Urmson is equally excited to work with Volkswagen, “Our priority at Aurora is to make self-driving cars a reality quickly, broadly and safely, and we know we will get there faster by partnering with innovative automakers like the Volkswagen Group. This partnership establishes a deep collaboration using Aurora’s self-driving technology, and together we will bring self-driving vehicles to market at scale.”