As a consequence of the efforts to slow the spread of the virus, the share of energy use that was exposed to containment measures jumped from 5% in mid-March to 50% in mid-April. Several European countries and the United States have announced that they expect to reopen parts of the economy in May so that April may be the hardest hit month.

Beyond the immediate impact on health, the current crisis has major implications for global economies, energy use, and CO2 emissions. Through mid-April, our daily data analysis shows that countries in full lockdown are experiencing an average 25% decline in energy demand per week, and countries in partial lockdown an average 18% decline. Daily data collected for 30 countries until the 14th of April, representing over two-thirds of global energy demand, shows that demand depression depends on lockdowns duration and stringency.

Global energy demand declined by 3.8% in the first quarter of 2020, with most of March’s impact as confinement measures were enforced in Europe, North America, and elsewhere.

Global coal demand was hit the hardest, falling by almost 8% compared with the first quarter of 2019. Three reasons converged to explain this drop. China – a coal-based economy – was the country the hardest hit by Covid‑19 in the first quarter; cheap gas and continued growth in renewables elsewhere challenged coal, and mild weather also capped coal use.

Oil demand was also hit strongly, down nearly 5% in the first quarter, mostly by curtailment in mobility and aviation, which account for nearly 60% of global oil demand. By the end of March, global road transport activity was almost 50% below the 2019 average and aviation 60% below.

The pandemic’s impact on gas demand was more moderate, at around 2%, as gas-based economies were not strongly affected in the first quarter of 2020.

Renewables were the only source that posted a growth in demand, driven by larger installed capacity and priority dispatch.

For weeks, the shape of demand resembled that of a prolonged Sunday. Demand reductions have lifted the share of renewables in the electricity supply, as their output is largely unaffected by demand. Demand fell for all other sources of electricity, including coal, gas, and nuclear power.

Looking at the full year, we explore a scenario that quantifies the energy impacts of a widespread global recession caused by months-long restrictions on mobility and social and economic activity. Within this scenario, the recovery from the lockdown recession’s depths is only gradual and is accompanied by a substantial permanent loss in economic activity, despite macroeconomic policy efforts. 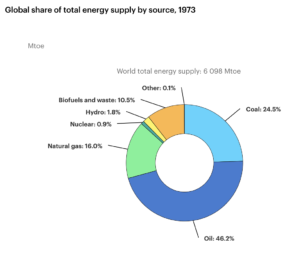 All fuels will be affected:

Oil demand could drop by 9%, or 9 mb/d on average across the year, returning oil consumption to 2012 levels.

In large part, coal demand could decline by 8% because electricity demand will be nearly 5% lower over the year. The recovery of coal demand for industry and electricity generation in China could offset larger declines elsewhere.

Gas demand could fall much further across the full year than in the first quarter, with reduced demand in power and industry applications.

Renewables demand is expected to increase because of low operating costs and preferential access to many power systems. Recent growth in capacity, some new projects coming online in 2020 would also boost output.

In the IEA estimate for 2020, global electricity demand falls by 5%, with 10% reductions in some regions. Low-carbon sources would far outstrip coal-fired generation globally, extending the lead established in 2019.
Global CO2 emissions are expected to decline by 8%, or almost 2.6 gigatonnes (Gt), to levels of 10 years ago.

Such a year-on-year reduction would be the largest ever, six times larger than the previous record reduction of 0.4 Gt in 2009 – caused by the global financial crisis – and twice as large as the combined total of all previous reductions since the end of World War II. However, as after previous crises, the rebound in emissions may be larger than the decline, unless the wave of investment to restart the economy is dedicated to cleaner and more resilient energy infrastructure.

This rise mainly came from China, India, Indonesia, and some other countries in South and Southeast Asia, regions where electricity demand has continued to grow, and coal remains the largest electricity source. There is a stark variation in the coal outlook between the Stated Policies Scenario. Global coal demand is essentially flat, and the Sustainable Development Scenario, in which it falls rapidly. 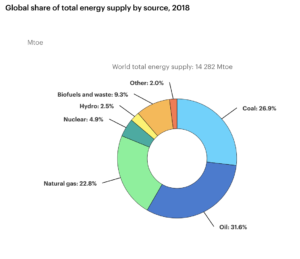 Global electricity demand expects to fall by 5% in 2020, eight times the reduction in 2009 due to the global financial crisis. A faster recovery would reduce electricity demand by 2%, as all areas of economic activity resume. But the wider spread of COVID 19 in Africa, Latin America, and other areas of the developing world, and a second wave in autumn in advanced economies, could lead to an even greater decline.

The Covid-19 crisis has led to a 20% revision in the IEA’s 2020 forecast
The IEA forecasts that additions of renewable electricity capacity will decline by 13% in 2020 compared with 2019, the first downward trend since 2000. This is a 20% downward revision compared to our previous forecast, in which 2020 was due to be a record year for renewable power. The update reflects both possible delays in construction activity due to supply chain disruptions, lockdown measures, and social‑distancing guidelines, and emerging financing challenges.

Natural gas is the cleanest burning and fastest-growing fossil fuel, contributing to almost one-third of total energy demand growth through the last decade, more than any other fuel.

Natural gas consumption was already falling over the first months of 2020 in major markets even before the Covid-19 pandemic, mainly due to historically mild temperatures in the northern hemisphere. Supply did not adjust to this drop in consumption, resulting in a considerable gas build-up in storage. Demand projects to decrease in 2020, with most of the declines in power generation.

Operating nuclear reactors worldwide 2018 – 452 REACTORS
Global nuclear power generation was down 3.5% in the first quarter of 2020

Nuclear power has historically been one of the largest contributors to carbon-free electricity globally, and it has significant potential to contribute to power sector decarbonization.

Global nuclear power generation was pulled down by electricity demand reductions in most markets due to the Covid-19 crisis and fewer reactors in operation, with China being the exception. In IEA estimates for 2020, nuclear power declines by about 3% from 2019. A faster recovery would see higher electricity demand and some new reactors completed in 2020, leading to just a 1% decline

Oil markets are going through a period of extraordinary change as the United States is increasingly leading the expansion of global oil supplies, and demand is shifting from developed economies and transportation fuels to Asia and petrochemicals.

Global oil demand expects to be a record 9.3 MB/d lower in 2020 than in 2019, mostly because containment measures in 187 countries brought global mobility to a halt. The recovery in the second half of 2020 projects to be gradual, as economies come out of containment and activity levels rise. Still, demand expects to reach pre-crisis levels before the end of the year.

The set of countries mentioned above account for a combined share of more than 80% of global GDP. To calculate the world average the contraction on annual GDP growth for the rest of the world is assumed at 2% per month of containment measures.

The World Economic Forum says that on the first International Day for Clean Air for blue skies, lessons learned from shutdowns can inspire reaching cleaner air in a post-pandemic world

Due to lockdown, cities have recorded drops in air pollution: there was a 25% reduction in PM in New York City, 32% in São Paulo, 60% in Delhi, and 54% in Seoul. There is an opportunity to either support a green recovery and build back better or lock-in patterns that will do permanent damage to our fragile systems for many years to come.

Business and industry have a key role to play to reduce air pollution as both contributors and solution-providers, here are 5 actions that they can take: