Infiniti is planning a serious Back to the Future party at the 2017 Pebble Beach Concours d’Elegance this year, including a retro Prototype 9. At the 2017 Pebble Beach Concours d’Elegance in California, Infiniti will unveil a heritage-inspired single-seater prototype electric race car. Driven by Emotion, inspired by a simple design sketch the Prototype 9 reimagines what might have been for a 1940s INFINITI grand Prix race car

As told by Infiniti at Pebble Beach

·         Advanced technology with traditional hands and hearts of hundreds of craftsmen

“Prototype 9 celebrates the tradition of ingenuity, craftsmanship, and passion of our forebears at Nissan Motor Corporation, on whose shoulders we stand today. It started as a discussion: What if INFINITI had created a race car in the 1940s? If one were to imagine an open-wheeled INFINITI racer on the famous circuits of the era, such as Japan’s Tamagawa Speedway, what would that look like? The sketches were stunning and the idea so compelling that we had to produce a prototype. As other departments became aware of this, they volunteered their time to create a working vehicle.”

Prototype 9 is emblematic of INFINITI’s entrepreneurial spirit and passion for a stunning design. From humble beginnings as a sketch to the dynamic example presented at Pebble Beach, Prototype 9 has been brought to life as an after-hours endeavor by a passionate and enterprising team of employees from across the Nissan Motor Corporation.

The car is powered by a prototype electric motor and battery from Nissan Motor Corporation’s Advanced Powertrain Department. This nod to the future contrasts with the traditional materials and techniques applied for the Prototype 9’s manufacture, including panels hand-beaten by a team of Takumi – Nissan Motor’s master artisans.

“What started as an after-hours idea grew into a fully-fledged prototype; our designers and engineers were excited by the notion of creating a past vision, a nod to our origins. They volunteered their own time; more and more staff became involved. Our teams have proven skills in manufacturing, engineering, design, and advanced powertrains, yet they wanted to bring their own traditional craftsmanship to the project. They made Prototype 9 a reality, a result of their ingenuity – they recognized and realized the past, powered by a future-centric electric powertrain at its heart. Prototype 9 blends modern technology and hand-crafted details paying tribute to the forebears of INFINITI.”

Prototype 9 was inspired by an emerging era of Japanese motorsport. The custom-built Prince R380, which also will be shown during Monterey Car Week at The Quail, a Motorsports Gathering, broke several land speed records in 1965 before taking overall victory at the 1966 Japanese Grand Prix at Fuji Speedway.

Prince Motor Company is considered to be Japan’s original builder of premium automobiles, and its legacy can be traced to INFINITI Motor Company and its current model line. The R380 shown at The Quail is the actual Japanese Grand Prix-winning car, believed to be the only surviving R380.

“We like to think that INFINITI, with its stunning design, high-performance capability, and forward-looking technology, shares some DNA with the Prince Motor Company, which became part of Nissan Motors. Prototype 9 is a celebration of the artistry and ingenuity inherent in our company.”

Where existing and future INFINITI models adhere to the company’s “Q” and “QX” nomenclature, Prototype 9 represents something different. Echoing the company’s origins, the figure “9” is pronounced “kyuu” in Japanese – similar to the English pronunciation of the letter “Q,” which is used for all of the company’s production cars.

Prototype 9: Infiniti Designers imagine, “what if…?”

“We discussed the idea of ‘chancing’ upon an unrecognized race car, hidden away for decades in a barn, deep in the Japanese countryside. We wanted to explore what this looked like, what it would have been made of. Open-wheeled racers of the age were beautiful machines, elegant and powerful and with a wonderful purity of purpose. It’s an automotive fantasy, but the notion captured our imaginations enough to put pencil to paper.”

The starting point for bringing Prototype 9 to life was a conceptual sketch: an interpretation of an INFINITI race car, inspired by roadsters and aircraft of the era yet molded in new materials and advanced technology. From this moment Prototype, 9’s transformation from sketch to reality was inevitable.

Albaisa created a sketch of the vehicle, with sleek lines, and aeronautically-inspired bodywork crafted in bare sheet metal. Initially shared only with close colleagues, the idea soon spread among INFINITI’s design team members – with a number enthusiastically calling for the vehicle to be brought to life.

The sketch triggered a domino effect – each person who saw it felt it deserved more attention, and soon there was a burgeoning desire within INFINITI to take it beyond the drawing board.

More designers at the INFINITI Design Studio in Atsugi, Japan, began making their own detail contributions – the shape, design, and materials that could feature in the cockpit, for example. Chasing a passion for beautiful vehicle design, the team moved to bring the sketch into the physical world.

The vehicle was transformed from a daring idea into scale design studies in clay. Full-size models were soon formed. Although still a secretive “passion project” at this point, word seeped into other parts of INFINITI Motor Company and throughout its parent company, the Nissan Motor Corporation. People noticed something a little different was taking shape at the design center.

“The creation of the real world INFINITI Prototype 9 was entirely and coincidentally organic. As we started work on a physical model, word spread beyond the core design team, and other departments started checking in and offering assistance. Eventually, the production team became aware of the project – and brought with them the desire and skills to build it.”

When INFINITI’s production team became aware of Prototype 9, they immediately offered to build it. The model was secretly moved from the INFINITI Design Studio in Atsugi to a secluded section of the Nissan Research Center, Oppama, just outside Yokohama, Japan. Here, the car could be quietly constructed. A team of Takumi – Nissan Motor Corporation’s master craftspeople – was gathered to create the motorsport- and aeronautically-inspired racer.

Finished in a bare sheet-metal skin, Prototype 9 is the result of countless hours of careful construction. The designs of the brand’s contemporary road cars are characterized by deep-stamping production methods, which enable the creation of sharply defined lines and smooth body surfaces. Far from production lines, this out-of-hours project required similarly technical yet more traditional crafting methods.

The vehicle’s stunning bodywork is made from steel body panels wrapped around a steel ladder frame. The panels were hammered into shape by the Takumi. For Prototype 9, panel beaters incorporated INFINITI’s signature design elements, such as the double-arch grille, “shark gills” aft of the front wheels, a single-crease hood, and sharp lines that stretch from front to rear.

In every other respect, the car is unashamedly inspired by retro aeronautical designs. Prototype 9 is defined by its smooth, aerodynamic surfaces, long bonnet and short overhangs, an exposed cockpit, and open-wheeled layout. Nineteen-inch center-locking wire-spoke wheels at each corner are even wrapped in period cross-ply competition tires.

As uniquely Japanese in design and craftsmanship as the bodywork, the cockpit adheres to INFINITI’s contemporary approach to interior design. Articulating the same sense of advanced human artistry of INFINITI’s production cars and near-production concepts, Prototype 9’s cabin has been handmade by the company’s interior design teams.

The intimate and focused cockpit is the result of two Japanese approaches to craftsmanship – “mitate” (pronounced “mee-ta-teh”) and “shitate” (“shee-ta-teh”). “Mitate” relates to the practice of curating and bringing together the best possible selection of materials. “Shitate” is the desire to tailor the chosen combination of materials, bringing out their best characteristics.

With this fine attention to detail and finish, the cockpit is wrapped in black leather with contrast red stitching, sewn and finished in such a way as to echo earlier single-seater racers. Subtle Japanese flags are stitched into the integrated headrests of the deep single bucket seat.

In a cabin that features no distractions from the road ahead, the steering wheel rotates around a fixed central hub that houses the driver’s instrument gauges. The hub itself is finished in turned aluminum, an effect found on aircraft throughout the first half of the 20th century.

As on the machines that inspired Prototype 9’s design, the effect has been completed by hand, “turning” aluminum shavings into the fascia with the end of a cork. Inspired by the project, this was a finish that the interiors team had not previously had the opportunity to explore.

With a single-minded focus on driving, the cabin features minimal switchgear, with those that remain modeled on cockpit switches.

“The beautiful execution of Prototype 9 represents a combination of artistry, craftsmanship, and commitment to a romantic notion of our heritage. It inspired our people to work on Prototype 9 in their own time – as they were completely invested in the project and the details and features that originated with them. Prototype 9 has been a labor of love for many of us.”

“While the essence of the INFINITI Prototype 9 is rooted in the past, it runs on a next-generation EV powertrain which looks squarely to the future. It is an excellent example of the ingenuity, craftsmanship and entrepreneurism that characterizes the teams across our company. Prototype 9 comes to life as a dynamic, drivable prototype vehicle at Pebble Beach.”

As word of the project reached across Nissan Motor Corporation, a team of powertrain engineers brought their own proposal: to equip the car with a next-generation EV powertrain. The Prototype 9 is the first INFINITI to be powered by a new EV powertrain: a 30 kWh high-voltage battery paired with a prototype electric motor, one not yet seen on a production vehicle.

Lithium-ion battery with an electric motor

252 mm ventilated discs without a booster

252 mm solid discs without a booster 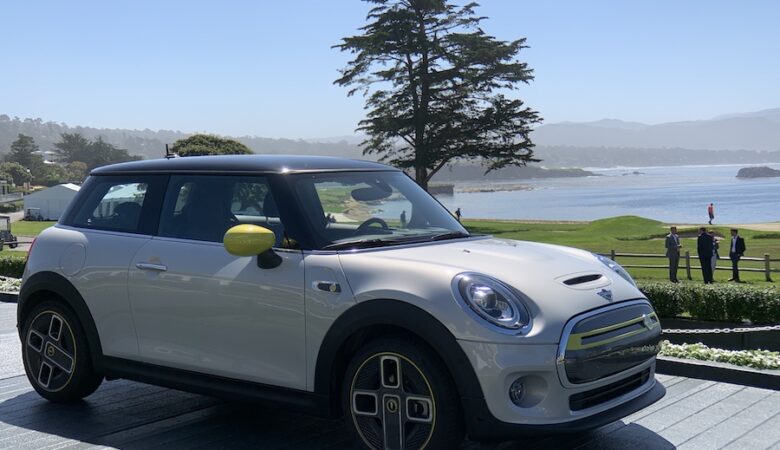 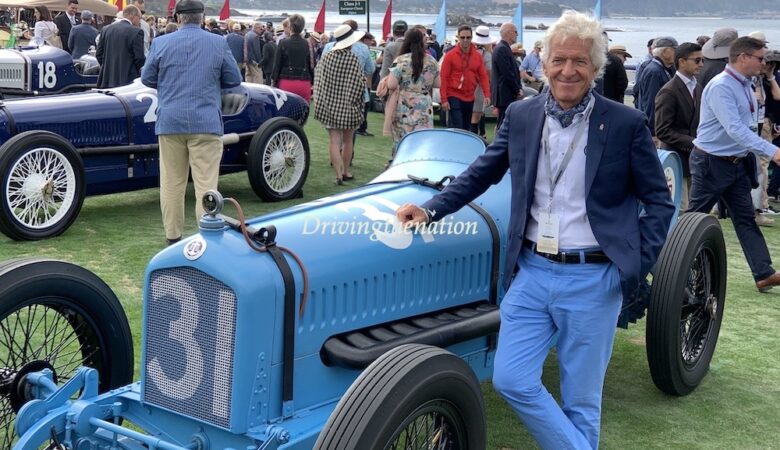 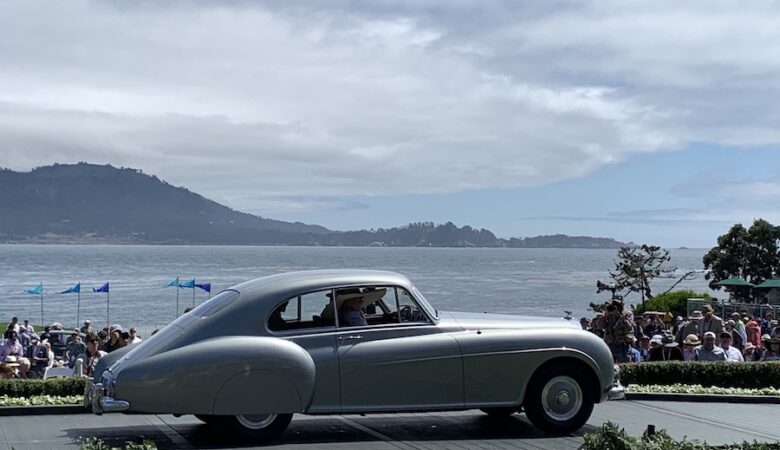