Fool me once, Shame on you

“In times of crisis, we have to transcend the personal and come together for the greater good. Whether it is beverage companies producing hand sanitizer or fashion companies creating hospital gowns, there’s nothing more entrepreneurial than seeing an urgent need and meeting it. That’s why we are using our scale, expertise, and resources to fill the dire shortage of ventilators, face masks, and shields.” – Mary Barra, GM Chairman, and CEO

Ford and General Motors are working around the clock to produce face masks and ventilators in the fight against the COVID-19 pandemic. What are they getting in return from the president they helped elect? A slap in the face.

Nate Silver’s election analytic’s website Fivethirtyeight says that Michigan is one of the perennial swing states when it comes to electing a President.

It certainly was in 2016 when Michigan helped push Trump over the finish line to become President of the United States. Trump won the states of Michigan, Pennsylvania, Wisconsin, Florida, Ohio, and Iowa, all of which were won by Obama in 2008 and 2012.

President Trump was strategic when it came to the electoral college votes in 2016. He beat Hillary Clinton in the one area that counted more than individual votes, a feat that has only been accomplished four times previously in American history.

It’s not just car companies; it’s every company. The Ozarks show that I am watching was filmed in Georgia, not in the Ozarks because Georgia gave the filming crew a better tax deal. Business as usual. You scratch my back, and I’ll scratch yours.

It follows all the way up the political ladder. Governors, Senators, and even Presidents know that this is a symbiotic relationship. Presidential candidates have long based their ability to get in the oval office by getting endorsements from unions, and companies.

Michigan was the heart of the automobile industry and is still on the forefront today, though other states have started cutting into that industry. Part of the intrigue for the car company is the ability to have a great working relationship with the state the company does business. For the state, it is the extra tax revenue and more jobs in that state.

It is normal, right or wrong, that large companies work with the government for the benefit of its company and stockholders. It’s usually a two-way street with both groups understanding the mutual benefit of a long-term relationship. That’s what is perplexing.

Donald Trump is going to need Michigan’s electoral votes to win in November. Why would Trump diss the companies that are working hard to make ventilators and facial mask for the good of the country at cost?

According to a CNN exit poll in 2016, 52% of the white women that voted cast their ballots for Donald Trump, and 62% of white people between the ages of 45-64 years old voted for Trump.

Both Governor Gretchen Esther Whitmer (D-MI) and Mary Barra are of the age that they could have voted for Trump given the statistics, though it is doubtful that Whitmer voted for Trump.

Just like many other Democratic Governors, Gretchen Esther Whitmer has been playing nice with Donald Trump. Because as she was warned by him, he’s willing to help blue-state governors contain the coronavirus outbreak, but only if they’re willing to stop criticizing him in exchange.

The leader of the country, President Donald Trump, the presumed Presidential nominee for the Republican party in 2020 is accusing the “young girl Governor” of Michigan of failing Michigan in its time of need. 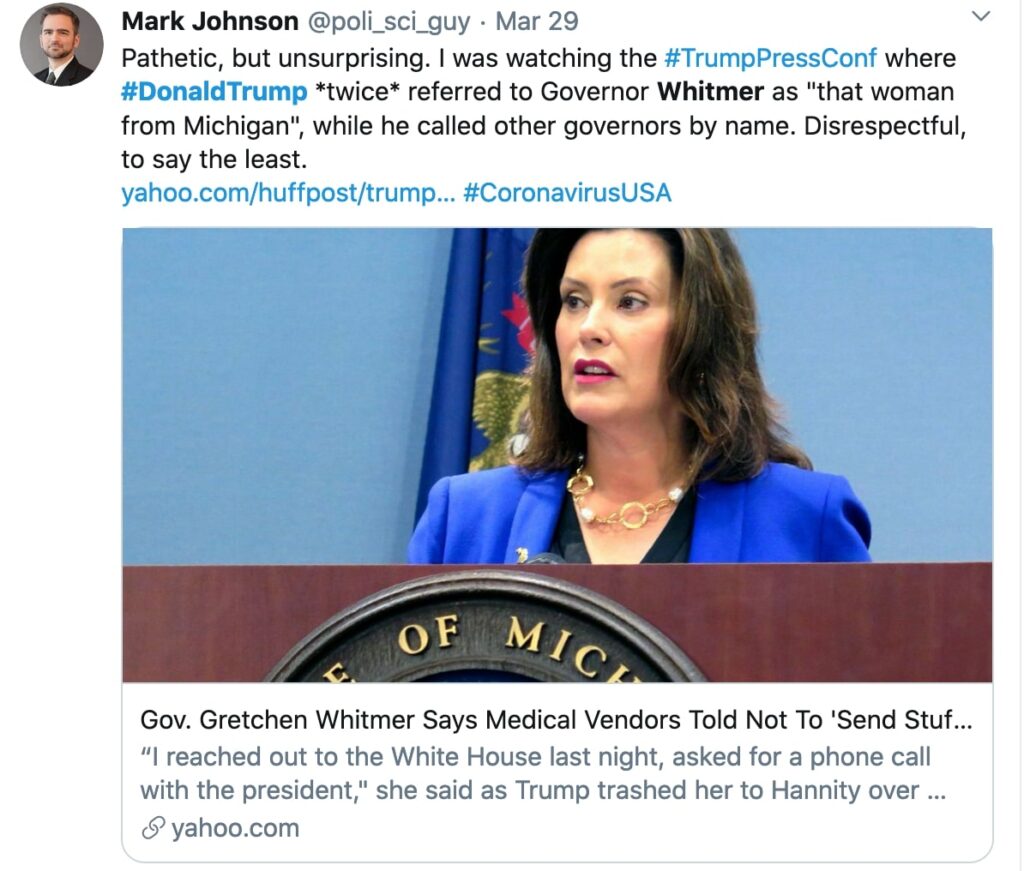 “Failing Michigan Governor must work harder and be much more proactive,” he wrote. “We are pushing her to get the job done. I stand with Michigan!” He has referred to her so often as that woman from Michigan that it has become a hashtag on twitter and T-shirts like the one she wore on The Daily Show with Trevor Noah are being sold.

Trump seems to have the same fixation on General Motor’s CEO, Mary Barra.

Both of these women are at the height of their game; they are women that other women watch to see how to break the glass ceiling. They are watching President Trump treat them differently than their Democratic colleagues and male CEOS. Is that going to make an impression on them in November?

Since becoming president, Trump has taken on Ford and General Motors, offering his opinion on how the companies should operate their businesses.

This time it was different; President Trump accused General Motors of dragging its feet in producing ventilators to be distributed to the hospital front lines in the battle against coronavirus.

When other companies have shut down during the COVID-19 pandemic, General Motors stepped up and starting working with Ventec to manufacture ventilators. Instead of extolling the virtues of such a gesture, Trump invoked the Korean War-era Defense Production Act, which allows a president to force companies to make products for national defense of critical materials and goods.

For General Motors to be accused of dragging its feet in the time of need could be the breaking point for Michigan. My Facebook is full of Michiganders that are Michigan proud. It wasn’t just General Motors and Ford employees that were angry; it was Michigan. It wasn’t just people that lived in Michigan, but people from Michigan all over the United States. There is a deep history of Michiganders stepping up to the plate in times of war and trouble, and the pride was swift and deep when the car companies announced they would help the war on COVID-19. It was just as swift and deep when President Trump accused them of dragging their feet.

Is there a strategy for President Trump’s dismissiveness and disgust with the car companies in Michigan? If there is, it is not obvious to any of the people on social media.

Could Trump be playing Ohio against Michigan?

Companies and businesses depend on the stability of working relationships. The goodwill they develop with their country and their state and their customers are put in jeopardy when they are being dressed down by our Commander in Chief one day and praised the next.

Is Michigan upset with Trump?

Not everyone. According to a Michigander in touch with the politics of the day, “Unfortunately, no. In fact, their support of him is stronger than ever. It’s psychotic. They’ve turned on Whitmer as well.” From anecdotal information, the two camps are squaring off, blaming the other side for the woes of the state.

Is Michigan upset with Trump?

At a time when the Nation is coming together to heal this great country of ours, is Donald Trump playing the people of Michigan against its Democratic state politicians? How does Governor Whitmer pull her flock under her wings to pull the state together?

In 2018 the Pew Research Center says that over 3% more women voted than men. Trump got less of the vote from women than any projected Democratic presidential candidate from women. President Donald Trump is not making progress with women. And that’s creating a formidable strategic challenge for the incumbent president as he faces a highly competitive re-election race next year.

Fool me twice, Shame on Me.

Fool me twice, Shame on Me