If you could build a car, would it be built on your family heritage or your personal life, how would it look? What colors would be on the exterior and interior?
Rolls-Royce unveiled a coach-built sweptail at the Concorso d’Eleganza Villa d’Este. Sure, it’s an expensive car, more than you or I could afford, but the question is what would a car designed by you, built to your specifications look like if you could build a car?

Many people design their homes, some of the wealthier design their yachts. The chief designer of Rolls-Royce, Giles Davis, says that coach-building is making a resurgence, and I agree with him. On my two-week emersion of cars with Veloce Tours, I met Italdesign, a company that reports to Audi, along with Lamborghini and Ducati. They are building five coach-built cars.

You and I don’t coach-build our cars, but we do pick the colors, the options, and the engine. Is there a particular color you always pick? I was with a gentleman a couple of weeks ago that wouldn’t drive a white car. He’d had an accident in a white car and wouldn’t drive one again. Are you opposed to certain colors?

I am in Whitley, located near the City of Coventry today with Jaguar. The Women’s World Car of the Year (WWCOTY) is presenting Jaguar with the Supreme Award for 2017 for the Jaguar F-Pace. Last night we had dinner with Jaguar’s Director of Design, Ian Callum. Today we spent the day at Jaguar design center with Ian, and I saw the future.

The WWCOTY was presented to CEO, Ralf Speth, Chief Designer, Ian Callum (and Board member) and Fiona Pargeter, global director of PR communications and the only woman on the Board of Directors and the highest-ranking woman in Jaguar Land Rover. Callum and Pargeter spent the day with Eleven women from ten different countries giving us a glimpse into how Jaguar products are created and steps needed to create the heritage of the future.

The Special Vehicle Operations (SVO), the ultimate in Jaguar Land Rover personalization, is also located in the U.K. motor city.

If you are going to be in the Coventry area and want to visit Jaguar, there are certain facilities at Gaydon, Solihull, and Coventry that are open to the public to view.

Out of the mouths of babes

I spent the weekend with my girlfriend Larkin and her two-year-old, Ellis. Ellis has a MINI car, pink, mind you. She got in the car and promptly told her mother that she needed to go to the petrol station, that she was out of gas. Her mother explained to her that she didn’t need gas, that she needed to plug her car in for it to run. “You mean I don’t have to go to the petrol station, Mommy?”

That’s right Ellis, and hopefully when you’re old enough to drive there will be no wars over oil. 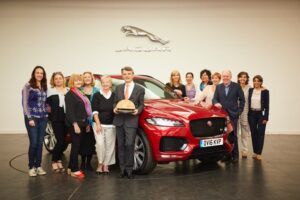