Ethanol is produced mainly from corn. One bushel of corn makes almost 3 gallons of ethanol. Years ago, Minnesota’s corn prices were among the lowest in the country, according to Ralph Groschen, Agriculture Marketing Specialist, Minnesota Department of Agriculture. Importing fuel Minnesota set up an Ethanol Program that mandates that all gas in Minnesota be blended with a percentage of ethanol, or corn.

I’m not saying that ethanol has become mainstream, but it’s only right to note that the first item on the itinerary is a game of golf. Would this be their annual “Alcohol Open”?

You only get the joke if you know “Ethanol” means fermentation ethyl alcohol derived from agricultural products, including potatoes, cereal, grains, cheese whey, and sugar beets; forest products; or other renewable resources, including residue and waste generated from the production, processing, and marketing of agricultural products, forest products, and other renewable resources according to Minnesota statutes 41.A.09. 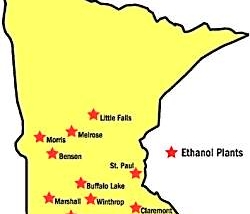 Minnesota is the state to quote. While others are talking about outsourcing and America’s dependence on oil Minnesota has quietly been producing jobs, increasing corn prices, lessening their dependence on oil and, yes, making money.


Ethanol is produced mainly from corn. One bushel of corn makes almost 3 gallons of ethanol. Years ago, Minnesota’s corn prices were among the lowest in the country, according to Ralph Groschen, Agriculture Marketing Specialist, Minnesota Department of Agriculture. Importing fuel Minnesota set up an Ethanol Program that mandates that all gas in Minnesota be blended with a percentage of ethanol, or corn. The goals of the program include:

The results since the program was launched are:

All Big-three car companies manufacture flexible-fuel vehicles (FFVs). These are vehicles that are manufactured to run on either regular gasoline or E85 fuel. Vehicles currently meeting FFV requirements are: 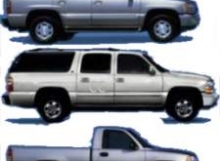 *Chrysler sells FFVs only in fleet. 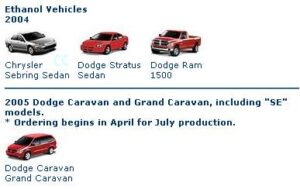 Why are car Manufacturers mass producing E85 vehicles when there are only 175 E85 fueling stations in the entire United States?

Car Manufacturers get credits for making FFVs for their Corporate Average Fuel Economy (CAFE) calculation. CAFE requires Manufacturers to meet a certain mpg over their entire fleet. For each vehicle, the Manufacturers produces that is FFV compatible the Manufacturer gets 1.2 mpg credit. The issue with this calculation is that, unless you live in Minnesota – corn country – it is hard to find E85 fuel. What is needed now is more linkage between FFV vehicles being produced and the supply of E85 fuel stations. Remember the movie, “A Field of Dreams”, where he says “If you build it, they will come?” The Manufacturers have built the vehicles and by the end of 2004 will have 4 million FFVs on the road.

According to Groschen, ethanol stemmed from the low price of corn. Farmers were going broke trying to make a living selling a full field of corn. The farmers got together and found another revenue stream. The farmer’s coalition has thirteen ethanol plants, processing corn into something that is worth more than corn. This revenue stream is known as ethanol. In 2004, the entire U.S. ethanol industry will produce and sell 3.5 billion gallons of ethanol in the United States. That equals 15 percent of Minnesota’s corn going to the production of ethanol. Minnesota is the fifth largest producing state after Iowa, Illinois, Nebraska, and South Dakota.

Groschen and The New York Times both report that there is another group in Minnesota, the Cargill group, that is looking at importing Brazilian ethanol. An obscure law from the ’80s would allow Cargill to take Brazilian ethanol, dehydrate it in El Salvador and ship 7 percent of total U.S. production to the United States, duty-free , saving Cargill 53 cents a gallon. While this might not be a problem this year, as the U.S. is producing as much ethanol as it can, it may play favorably to imports from the Caribbean and some Central American countries in the years to come.

According to John Urbanchuk, a consultant with lecg.com, “the production of ethanol has created almost 125,000 jobs and will put an additional $3.9 billion into the pockets of American consumers this year. An estimated 30 percent of all gasoline used in the United States will be blended with ethanol in 2004. In the ’70s our dependence more than doubled. With ethanol, we are slowing the growth rate. Ethanol supports rural economies. It provides jobs and increases the Gross Domestic Product (GDP). Henry Ford’s first car engine was designed by Diesel and was intended to be powered by ethanol.”

“New York consumers now buy ethanol in their oxygenated fuel at a 10% blend. As you know New York has to sell oxygenated fuel in the winter months (Nov-Mar) in order to meet Clean Air Act standards. In January Governor Pataki implemented a ban on MTBE (the other primary source of oxygen) and ethanol is replacing MTBE not only in New York but in California and Connecticut (other states have banned MTBE and will switch to ethanol).”

Ethanol holds the properties that California is looking for when it comes to emissions. According to Groschen, ethanol is a high compression fuel with a 113 octane rating level. Combining one gallon of ethanol with nine gallons of gas totals ten gallons of mid-grade gas. When one uses ethanol with a richly tuned engine there is a potential for better horsepower. A 2-3 percent decrease in mpg can be expected, but Groschen points to a 30-35 percent decrease in carbon monoxide and hydrocarbons, which are evil ozone precursors.

According to Monty Shaw, spokesperson for Renewable Energy, “America uses 125 billion gallons of gas a year for vehicles. If we converted all gas for vehicles to E10, we would need 12.5 billion gallons less of imported gas every year. Ethanol pushes the price of corn up and reduces subsidies paid by the government, based on the price of corn. We are being phased in over time. This is giving us time to get the industry up to capacity.”

Ethanol made from the corn stalks – not the corn

Another revenue stream for Minnesota farmers could be their corn stalks. Iogen Corporation of Ottawa has developed a process that allows enzymes to break down the non- food portion of corn stalk, wheat stalk wood chips, stalk termed as “cellulose”, into ethanol on a commercial scale. Cellulose ethanol and conventional (grain derived) ethanol are howe’ver the same final product, just made a different way, from different parts of the product.