Listen as I talk to John Batchelor

Most companies are saying they expect autonomous vehicles to start showing up in dealerships by 2025, there is even a website dedicated to the goal of autonomous driving by 2025. In London, Rolls-Royce showed the VISION NEXT 100 the marque’s first-ever Pure Vision Vehicle.

What is powerful about this vehicle is what stays on the car and what the Vision Next 100 doesn’t see as necessary on a vehicle in twenty-five years.

25 years from now the Rolls Royce Vision Next 100 will be autonomous – there will be no need for a chauffeur, other than to open the door, or for added security.

The doors are not standard doors, and they are not gullwing, they are called clamshell doors, something you could see a starlet such as Scarlett Johanssen stepping out of and into the limelight. Think of Queen Elizabeth at her coronation or 90th birthday party, regally seated in her lounge till she stands up and the doors open to the heavens, a step comes out from underneath, while a red carpet light projects on the ground in front of her to guide her way. 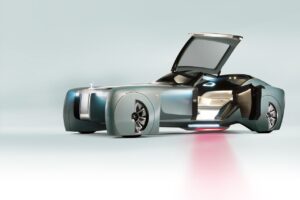 The goal of the vision is about the ride and experience – a magic carpet ride of an imposing vehicle – it is as majestic as a Rolls-Royce Phantom sedan in stature. The almost yacht-sized sedan measures 20 feet long and more than 5 feet tall and has an extended coach door plus clamshell opening – think Chevy Suburban and add a couple of feet.

The focus is on the passenger compartment

Another part of a car that won’t be in the Vision Next 100 is the internal combustion engine. 25 years from now this Rolls-Royce will have an electric or hydrogen powertrain.

What the car does still have is wheels, and still four of them. Vertical fender skirts mask half the tires, allowing the design to take a striking poise.

Eleanor is the Spirit of Ecstasy

The artificial intelligence voice gives the historical nod to Eleanor Thorton, the inspiration of the 1911 Spirit of Ecstasy, sculpted by the artist Charles Sykes.

Another simply elegant nod to the history of Rolls-Royce is the luggage compartment, positioned just aft of the front wheels. If you look closely, you will see CS Rolls on one piece of luggage, and FH Royce on the other. Indeed Charles Stewart Rolls and Sir Frederick Henry Royce would enjoy the acknowledgment. 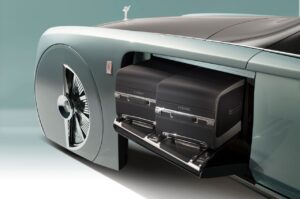 While others are trying to downsize for alternative powertrains BMW Group has purchased a carbon-fiber company that gives them a light-weight source for the shell of the vessel.

There will always be people that want luxury and want to arrive in luxury. Rolls-Royce shows us their intention in the Next 100 years is not going to become a commodity, but a design that projects the importance of the individual inside to those waiting outside.

John Batchelor asks whether autonomous cars are vaporware, how they would start to integrate on the highways, and how he can get what he calls the future Batmobile. Click on the link above to hear the conversation