Kerry vs. Bush – what if Kerry became President?

What if Kerry became President?

What effect would it have on the automotive industry if Kerry became President? Every person -whether they were voting for Bush or Kerry – in each corporation I spoke with told me that they were ” policy-neutral”. After questioning – off the record – they would say, ” We have to work with whoever is in office. Were not going to alienate anyone. According to The Kiplinger Letter Special Report, October 20, 2004, A President has a say in naming 800 top federal executives to carry out his policies. It was said by an industry insider, a person voting for Bush, that ” I don’t think Bush is a smart man. What I like about him is that he surrounds himself with smart people”. A look at some political appointments that Kerry could make in the critical jobs affecting the automobile industry is essential. According to Richard Sammon, Political Editor of The Kiplinger Letter, Kerry might appoint one of these people for the following positions.

Secretary of Energy, currently Spencer Abraham, could be replaced by former EPA Carol Browner. Appointed by President Clinton in January 1993, Carol M. Browner was the longest-serving administrator in the history of the U.S. Another possibility could be the unpaid advisor to Clinton, John Northington. Doubtful, but worthy of note could be Senator John B. Breaux (D-Louisiana).

Office of Management and Budget (OMB)doesn’t seem important to the auto industry, but OMB okays all regulations from government agencies. For example, before an EPA regulation can go through OMB has to look at the cost and benefit of the regulation and decide it’s worthiness. Currently, the director of OMB is Joshua B. Bolten. Mr. Bolten could be replaced by former National Economic Adviser to President Clinton and head of the National Economic Council from 1996-2000 Gene B. Sperling, or U.S. Representative John Spratt. Spratt is a senior democrat (D-SC) on the House Budget Committee. Another possibility could be president of the Democratic Leadership Council (DLC), Bruce Reed. Mr. Reed served for eight years in the Clinton-Gore White House.

How the candidates differ

How does the Kerrys position differ from Bushs and how do they affect the automotive industry? At first glance, it appears that Bush and Kerry hold similar positions on many energy issues. There are some issues that are more contentious than others and that is where the boldest differences are seen.

It is not news to anyone that Bush is an oilman. John Kerry accuses Bush of “Unnecessarily filling the Strategic Oil Reserve, which takes oil off an already tight market.” Kerry also accused George W. Bush of breaking his promise to force OPEC to “open the spigots”. Indeed, During the 2000 Presidential election campaign, Gov. George W. Bush promised to take on the OPEC cartel on behalf of American consumers. Bush said: “I think the president ought to get on the phone with the OPEC cartel and say, ˜We expect you to open your spigots. … The president of the United States must jawbone OPEC members to lower the price.”

Kerry says he will “bring a renewed American position to work with OPEC to manage supply.” Kerry also says that he wants to “Set goals for increased fuel efficiency”. This sounds like the bill Kerry/McCain tried to push through to increase CAFE to 36mpg in March 2002. The bill did not pass, however, Bush was able to get a 1.5-mile increase – the largest increase in the last twenty years.

CAFE was passed in 1975, with standards to start on the 1978 model cars. The goal of CAFE was to decrease our dependence on foreign oil by requiring vehicles to get better gas mileage.

Both these guys are posturing. All CAFE does is increase the miles a car can go on a gallon of gas. CAFE does not include all vehicles, there are credit’s for certain cars, credit’s for past years, blah, blah blah. CAFE is as convoluted as our tax system. Since 1978 Americans have increased the mpg by 5mpg/vehicle, we travel over 2,000 miles more per year per car than we did in 1978 and there are 300,000,000 vehicles on the road. The more economical fuel-efficient cars have allowed us to live further from our work, commuting from the sprawl of suburbia into the cities. According to DOE, Americans were using 6.5 million barrels a day for transportation in 1978, today they use 9.08 million barrels a day for transportation.

If our government really wanted to decrease the dependence on foreign oil they would raise the price of gas. They don’t because it would be political suicide. Make no mistake, this is not better for the consumer, all it does is make us use less gas, which is what CAFE was designed to accomplish.

Barring increasing the price, they should look to alternative fuels and advanced technology. Alternative fuels became popular back in the mid-70s after the oil crisis. Once the price of fuel went back down America went back to consuming it. Now we have another oil crisis, combined with environmental concerns.

Alternative Fuels and Advanced Technology have the ability to do what CAFE should have done. If done correctly the United States could not only decrease its dependence on foreign oil, they could own the patents and infrastructure for hydrogen. Alternative Fuels are ethanol, bio-diesel and ultimately hydrogen. Advanced technology starts with powertrains that squeak out another mile or two. We are currently entering the hybrid age. A mild hybrid can add 2-4 mpg more, a 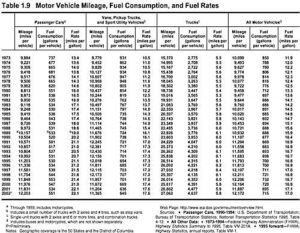 full hybrid can add 10-25 miles per gallon more. This advanced technology is not only a stop-gap, but it is also a study in what technology the manufacturers can take from these stopgaps, whether it is a hybrid, a hydrogen internal combustion engine or a hydrogen vehicle. For instance, the hybrid uses a nickel-metal hydride battery that most manufacturers are incorporating in their fuel cell vehicles.

How the candidates differ:

On the issue of hydrogen, Kerry wants to give “5 billion for Hydrogen Research with specific goals.”

According to Christopher Bordeaux, Senior Advisor Department of Energy Office of Policy and International Affairs, Bush appropriated 1.7 Billion dollars over a five-year span for the hydrogen fuel initiative. Below is a breakdown for the 2004 fiscal year of that 1.7 Billion budget.

The largest category, Weatherization, and Intergovernmental for $369,460 are explained by Bordeaux as, ” an educated guess that includes DOE, DOD, EPA, and other Government agencies. Much of this money has matching private sector funds — sometimes up to 50% cost share. ” The U.S. government spends about $300 million annually on hydrogen and fuel cell programs, more than any other country in the world.”

“Some of the programs that have been set up since Secretary Spencer Abraham has been appointed are: