Barcelona, Spain July 12, 2017 – Audi hosted a 24-hour party in Barcelona, Spain to kick-off its newest, most intelligent sedan ever built.  The fourth-generation A8 sedan was the star of the show showcasing connectivity and piloted driving.

The Audi Group, with its brands Audi, Ducati, Italdesign, and Lamborghini, is the most profitable segment of the Volkswagen Group, and part of the premier luxury segment. Audi is hoping to close the gap between the A8 and the Mercedes S-Class with this new mild hybrid system. I predict they will also put Cadillac and Tesla on notice with all the Artificial Intelligence, and Autonomous Stuff including self-parking from outside the vehicle, a technology that was showcased at the Consumer Electronics Show (CES) a couple of years ago.

Audi’s fourth generation flagship, the A8, is bringing out some futuristic technology. Buried in the press release, behind the 48V mild hybrid and the start/stop function is one impressive paragraph, “There is the new feature of predictive convenient starting: As soon as the vehicle in front of the Audi A8 moves, the engine starts even if the brake is still pressed. In this scenario, the control strategy concludes that the driver will spontaneously fall in with the flow of traffic.”

This technology is the vehicle-to-grid infrastructure that Audi showed off at the 2010 Challenge Bibendum in Brazil. Seven years later Audi has implemented in its highest technology car ever produced.

The 48-Volt technology enables intelligent hybrid operating strategies with fuel savings of approximately 21 percent in real-life urban traffic. Start/Stop is becoming part of the mainstream as EPA includes the fuel savings in the EPA estimated fuel economy. The problem is that many start/stop systems in automobiles are clunky; they stop hard at a stop sign, and there can be a lag between the time you take your foot off the brake to the time you give the car gas. Audi has combined the fuel economy with performance through predictive behavior.

The start/stop function in the new Audi A8 differs markedly from previous generation systems. The technology in the vehicle can distinguish between different traffic situations. When the road ahead is clear, the belt alternator starter (BAS), which is permanently connected to the combustion engine, starts the combustion engine letting the Audi A8 drive off swiftly, as a performance car should. If there is a long stop or if you want to turn up the air conditioning, the combustion engine is started extra-smoothly and quietly.

The Audi A8 can coast, with zero emissions, for up to 40 seconds with the engine completely off. The start/stop operation is active from 13.7 mph, and as soon as the driver steps on the gas again, the BAS prompts a swift, very smooth restart. 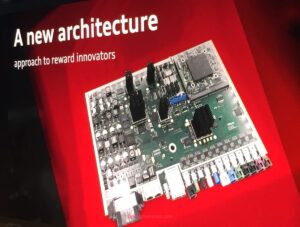 A fully configured A8 will use six NVIDIA processors

From piloted driving to parking to new services for digitally connected vehicles the new A8 includes technology powered by NVIDIA, AI Traffic Jam Pilot, which offers unprecedented levels of autonomy on crowded highways.
The system is activated by a button on the center console, and it can take over acceleration, braking, steering, and starting from a dead-stop, all without the driver paying attention. The A8 also includes revolutionary new user interfaces, a new infotainment system, a new virtual cockpit, and new rear seat entertainment options. A fully configured A8 will use six NVIDIA processors.

“The car of the future will make its occupants’ life easier with the help of artificial intelligence,” Audi Chairman of the Board Rupert Stadler said at the event’s keynote, which drew more than 2,000 guests. “Technology matters” he declared as he introduced the A8 with features such as Audi AI, Traffic Jam Pilot, Remote Park Pilot, Natural Voice Control and Swarm Intelligence.

Of particular note was Audi’s Zfas driver assistance system. It powers the world’s first true traffic jam assist system, for use on divided highways with on ramps and off ramps. Data from sensors are processed in Zfas as the system creates a precise environment model at the rate of 2.5 billion inputs per seconds – that, folks, is faster than the 0 to 60 of any Audi ever.

At the event held in Barcelona and hosted by Kunal Nayyar (known for his role as Rajesh Koothrappali on the CBS sitcom The Big Bang Theory), Audi brought out Mattijs van Tuijl, Audi designer and coordinator of the new Audi R8 interior, and Audi’s chief designer, Marc Lichte. Audi has fundamentally redesigned the A8 in its fourth generation. Audi’s chief designer, Marc Lichte has kept a promise that the luxury sedan harmonizes design and technology and characterizes the face of the brand.

Audi AI active suspension is a fully active suspension system like none I have ever seen from a premium production vehicle. The driver is capable of raising or lowering each wheel separately with electric actuators! That is seriously dope! You now have the flexibility of a smooth ride with the comfort of a classic luxury sedan to the dynamism of a sports car. In combination with pre sense 360°, the car is raised quickly to reduce the potential consequences of the accident for all occupants.

Audi said that by mid-decade, 2025 time frame, one-third of all Audi model lines would be electrified. Audi is also working on, or with, e-fuels (synthetic fuels), hydrogen and fuel cell technology. I talked to one engineer at the Audi Summit about using wind power, combined with CO2, to create a renewable electric energy.

All five engines operate in conjunction with a belt alternator starter (BAS), which is the nerve center of the 48-volt electrical system. This mild hybrid technology (MHEV, mild hybrid electric vehicle) enables the car to coast with the engine switched off, and to restart smoothly. It also has an extended start/stop function and an energy recovery output of up to 12 kW. The combined effect of these measures is to bring down the fuel consumption of the already efficient engines even further – by as much as 0.7 liters (0.2 US gal) per 100 kilometers (62.1 mi) in real driving conditions.

The A8 L e-Tron Quattro with its powerful plug-in hybrid drive will follow at a later date (This vehicle is not yet on sale. It does not yet have type approval and is therefore not subject to Directive 1999/94/EC.): It’s 3.0 TFSI, and the powerful electric motor achieves 330 kW (449 hp) of system power and 700 Nm (516.3 lb-ft) of system torque. The lithium-ion battery stores enough power for about 50 kilometers (31.1 mi) of electric driving. You can option up to the Audi Wireless Charging, a pad that goes on the garage floor and will transfer the power inductively to a receiver coil in the automobile with a power output of 3.6 kW.

Kunal Nayyar (known for his role as Rajesh Koothrappali on the CBS sitcom The Big Bang Theory)introduces the world premiere of the 2018 Audi A8 at the Audi Summit in Barcelona, Spain

There are about 10 seconds around 1:10 where you don’t see anything…wait for it. It is so cool. At one point around 2:00 the car goes sideways, and it looks like you’re looking at an axle and two tires. Because of where I am sitting you get to see double – the gleaming from the floor. It looks surreal. You will get through four minutes of this video before you realize you’re watching the world premiere unveil — so well thought out, it was mesmerizing to watch.