The sweetness of the LC500This is the stuff dreams are made of; a day at the Texas Motor Speedway in Denton, Texas driving a Lexus LC 500, Lexus LC 500 h, Toyota Camry and a Toyota Camry hybrid. 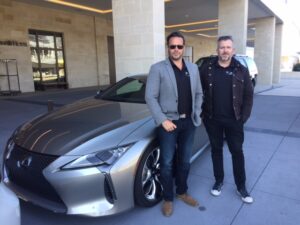 William Chergosky (L) and Ian Cartabiano (R) of CALTY Design showing off the 2018 LC 500 production car based on their 2012 concept for the LF-LC.

The car is beautiful, inside and out. Ian Cartabiano, the Exterior designer, runs his hand from the Spindle grille all the way up to the roof where the grille begins. Cartabiano shows great respect for the art of design with the LC 500, from the headlights to the taillights.

William Chergosky, interior designer, for the LC 500 has complimented the technology in the car with a human touch, a contrast of layers. As the door opens, I see a fan of fabric on the inside of the door. I sit in the cockpit, and the simplicity of design hides the intensity of technology available to the driver. 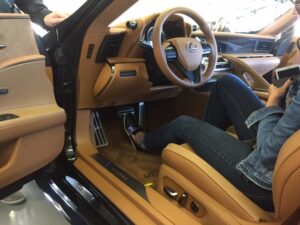 An exceptional piece of technology is the Bridgestone Turanza run-flat tires that have fins on it that keep the tires cooled. There is another fin in the apex of the corner where the side mirror is usually located to reduce wind noise. Amazingly, the LC 500 is half the weight of an early Lexus coupe. 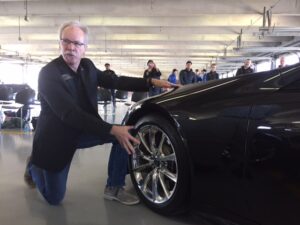 Let’s face it, I will never be able to afford a $96,000 Lexus LC 500h, but man was it fun to drive! I will never get tired of the sound of the burble and the squeal of tires going around a corner. Anyone who knows me knows that I love hybrids and plug-in hybrids. And, when I looked at the gasoline versus gasoline hybrid pricing the numbers, and the amount of fun, was pretty equal; 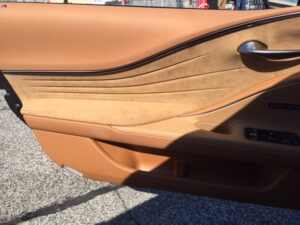 If I were able to afford a LC 500 h I would get it in Structural Blue, a new vehicle paint technology to emulate the blue Morpho butterfly’s wings. Native to North and South America, the Morpho butterfly is renowned for the intense shimmering blue of its wings. But in reality, the wings are colorless. The blue seen by the naked eye is created by light interference on their microscopic lattice surface structure.

According to Lexus, The pigment is used to produce new paint in a production process taking 8 months, including 12 production steps and 20 quality inspections. The paint is applied to the LC’s bodywork in a 15-micrometer layer between the primer and clear coats. Nano-structures – super-small flakes – in the paint generate iridescence, giving the impression of the color constantly changing with the light. Conventional pigment paints reflect less than 50 percent of incoming light as a visible blue color, but with Structural Blue the level is nearly 100 percent. In total, 300g pigment with 300 billion pigment flakes is used for one LC.

Such is the fine quality of the process, only two Structural Blue cars can be produced in a working day at Lexus’ Motomachi factory, the high-technology home of the LC.

I came back down to earth when I drove the Toyota Camry around the track. Now mind you, I don’t know anyone that will drive a Camry the way I was driving it around the Texas Motor Speedway, but it was a good test to ring it out.

2018 Honda Accord pricing and mpg

Toyota’s Bob Carter has his favorite, the two-tone 2018 Toyota Camry XSE Sports Edition, and he is right, it is almost like Toyota introduced two Camrys, one for the sports enthusiast, the other for pricing and fuel efficiency.

It was a good day.