Last week I drove from Auburn, CA to Laguna Beach, CA. It takes about seven hours to drive without stopping. That’s no fun, so we decided to stay in Lockeford, CA and spend the night with our friends, Richard and Lani Eklund. They own The Inn at Locke Bed and Breakfast. Stretch and Richard are Thorp T-18 flying buddies. It’s a lovely Inn surrounded by lots of wineries to go wine tasting. It’s practically becoming the second Napa Valley in California.

We drove the Ford C-Max Energi plug-in hybrid down and back and on average 42 mpg, but we were sometimes as high as 59.7 mpg.

The big difference is how much we spent on gasoline. Less than $100! Why? Because everywhere we stopped we were able to plug-in. Out the door the little hatchback that could cost $36,190. It’s a car I would buy. If you have a tight turning radius, you’ll want to take note of that when you’re test driving it.

Not only did The Inn at Locke Bed and Breakfast allow us to plug-in, but they also had a Tesla charger as well. (Richard was one of the first people I know to buy solar panels, and he owns a first-generation Toyota Prius)

Sure, part of it is that gasoline is hovering around $2.30 a gallon here, but that extra bit of charging every time we stopped allowing us to save, which is why the cost of the round trip was $100.

We even charged up our car at the California Air Resources Board (CARB) office in El Monte, CA while we talked to air pollution specialists there. That story is for next week, though. 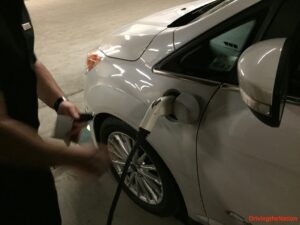